You are in : All News > 2,000 cookies a minute: Robotics drive automation to unseen levels of efficiency

11 Feb 2019 --- Advances in robotics are facilitating ever-increasing speed and efficiency in packaging automation. Robots are able to perform menial, repetitive functions with far higher productivity than humans, allowing personnel to focus on higher value tasks. As the global population and levels of consumption continue to rise, robotics will be an increasingly significant factor in meeting the growing demand for packaged goods.

Aseptic carton packagers, SIG, recognizes the potential of robotics in optimizing the speed and efficiency of processing. The company already integrates robotics into its filling lines.

“A good example of this is the SIG Robotic Magazine for high-speed filling machines – called R-CAM” Stefan Mergel, Senior Product Manager Equipment, SIG, tells PackagingInsights. “It enables manufacturers to create more efficient workflows and to reduce manual work hours. The R-CAM is integrated into the filling line in front of the SIG filling machines and able to load the filling machine with 24k carton sleeves, fully automatically.” 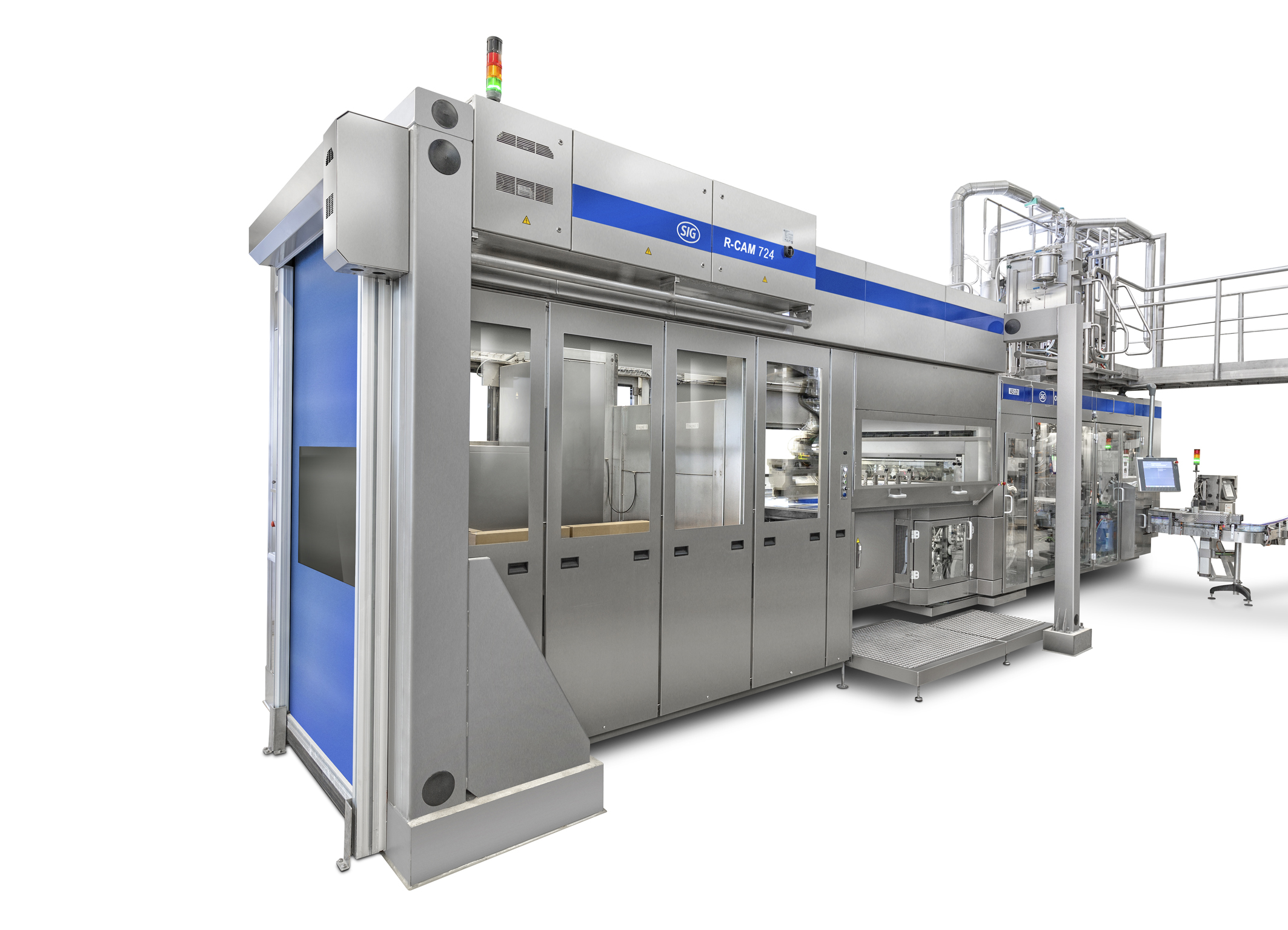 With the SIG Robotic Magazine, shipping boxes are removed from the pallet and opened, and the filling machine is loaded with carton sleeves in a fully automated process. This process does not require any action from the machine operator, Mergel notes.

“The robotic magazine consists of two parts: a pallet magazine and an unpacking station. The pallet magazine offers space for a Euro pallet, industrial pallet or Australian pallet. Once the pallet is inside the magazine, a scanner reads the pallet pattern to detect how the shipping boxes are loaded on the pallet,” Mergel explains.

“The gripper arm moves the shipping box to the unpacking station. The robotic magazine includes an internal buffer to ensure that production can continue to run smoothly even while a new pallet is being loaded into the pallet magazine. This buffer can hold up to 20 shipping boxes of carton sleeves,” he adds.

“The particular advantages of our packaging machines lie in the machines’ modular system design and the ability to individually determine their scope of performance and tailor it to the customer’s needs. Eight standardized, highly flexible system components are combined into a robot-supported packaging system in accordance with the modular principle,” Ralph Schubert, Managing Director, Schubert, tells PackagingInsights.

“Our robots offer a high degree of flexibility and repetition accuracy. Moreover, extremely high speeds can be realized with our robots,” he adds.

For example, Schubert’s F4 arm can accelerate with 10G, reaching speeds of up to 4.7 m/s with a noise level of only 70 dB. F4 robots can be programmed to work together as a team and mutually pursue filling objectives.

Schubert’s Transmodul is the “world’s first transport robot for packaging machines.” It has an inductive power supply which allows the Transmodul to move freely. Data and signals are transmitted wirelessly.

To hold cartons and products in place during transport, the Transmodul is equipped with a vacuum blower that generates a vacuum of 0.04 bar. The maximum acceleration is 3G. This allows it to reach speeds of up to 4.5 m/s. 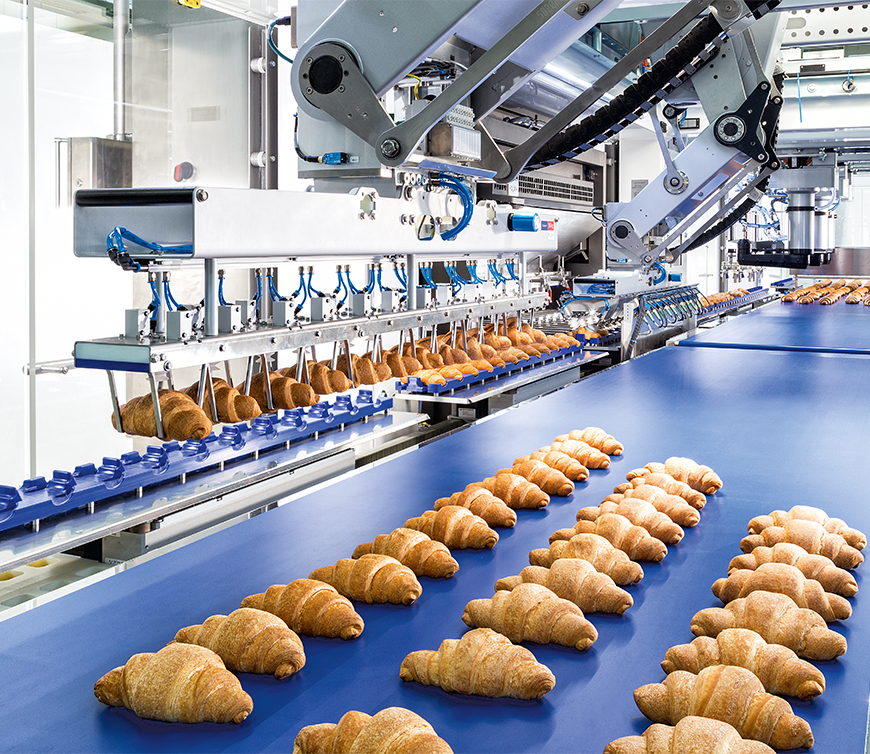 Click to EnlargeThe spring-loaded grippers carefully place the croissants onto the Transmodul in a registered location so they do not slip while being filled by the needle. To compensate for any fluctuations, the needles can be adjusted in height and depth (Schubert).

Schubert has aided Italian, family-owned company, San Giorgio Dolce & Salato, in its ambitions to be the first manufacturer to introduce pre-baked, filled and frozen croissants to the gastronomic market, with a purpose-built automated processing system. Schubert’s system gently injects different fillings into the baked goods and efficiently combines this operation with the final packaging process via sophisticated pick-and-place robots attached with gentle grippers. Thanks to this automation solution, San Giorgio Dolce & Salato can fill and package 160 croissants per minute.

The BreadBot turns flour into loaves, producing bread which is fresh, healthy, preservative-free and eco-friendly in comparison to center aisle bread. The system is aimed at re-establishing an “emotional connection with the shopper” that has been lost in an age of industrial food production.

“Believe it or not, the last time there was a major innovation in the way bread was made was 1912, with sliced bread,” Randall Wilkinson, CEO of The Wilkinson Baking Company, tells PackagingInsights.

“In the age of home delivery, the BreadBot attracts consumers back to the store. Consumers want fresh, delicious bread that is produced with theater and engagement,” he says.

“The commercial bread category at retail has, for many years, been stagnant if not declining. Yet, with the announcement of the BreadBot at CES 2019, social media exploded with interest in the BreadBot. We believe this reflects the pent up demand for fresh, tasty bread,” adds Wilkinson.

The BreadBot mixes, forms, proofs, bakes and cools ten loaves of bread per hour – all on its own – and is capable of making most varieties of bread that require dry ingredients. This includes white, wheat, whole wheat, nine grain, sourdough and honey oat.

How The BreadBot measures up:

Most food providers – including grocery stores, convenience stores and schools – can benefit from the compact 22-square-foot BreadBot, which is “more automated than a US$75 million bread factory,” the company says.

“Robotics make people increasingly important”
Robotics are sometimes feared as a technology that will put people out of work, but some argue it could actually benefit work satisfaction and increase the need for technical knowledge.

Click to EnlargeThe BreadBot developers believe that retailers' bread sales can increase by 30 percent using this fully automated machine.
SIG’s R-CAM creates more efficient workflows and, in doing so, reduces manual work hours and physical strain on the staff. “It allows them to concentrate on higher-value tasks instead of dealing with pallets, containers and loading jobs,” Mergel explains.

“The R-CAM from SIG is a good example to demonstrate that the robot application never gets tired compared to humans and can, therefore, carry out repetitive tasks without errors. However, people are becoming increasingly important in monitoring and maintaining robotics, which are highly complex mechatronic systems,” he says.

“Manual assembly lines have already been largely replaced by automation,” the Schubert spokesperson adds. “When it comes to packaging 2,000 cookies per minute, for example, a very high manual effort is necessary.”

Like Mergel, the Shubert spokesperson believes that robots’ ability to perform monotonous work tasks will enable employees to enjoy more sophisticated functions, such as programming and maintenance.

Cobots and automated guided vehicles (AGV)
As computers and robots become increasingly intelligent, collaborative and cooperative robots – cobots – are being developed to enhance new automation and further alleviate work tasks. Cobots are industrial robots that function without a safety area, capable of carrying out simple tasks.

“Schubert’s tog.519 robot is designed for pick & place tasks and for separating lightweight products,” Schubert tells PackagingInsights. “A typical task, for example, is to place pouches in the chain of an existing cartoner.”

“This would otherwise require one or two people to take the pouches out of the box and place them in the chain. The tog.519 recognizes the pouches even if they are lying one on top of another and identifies the chain pitches in which to place them.”

“Schubert’s cobot is fast and does not require guard doors. It slows down when people get close to it and stops safely before coming into contact with people. This makes it a cooperative robot in fact, rather than a collaborative robot,” Schubert adds. 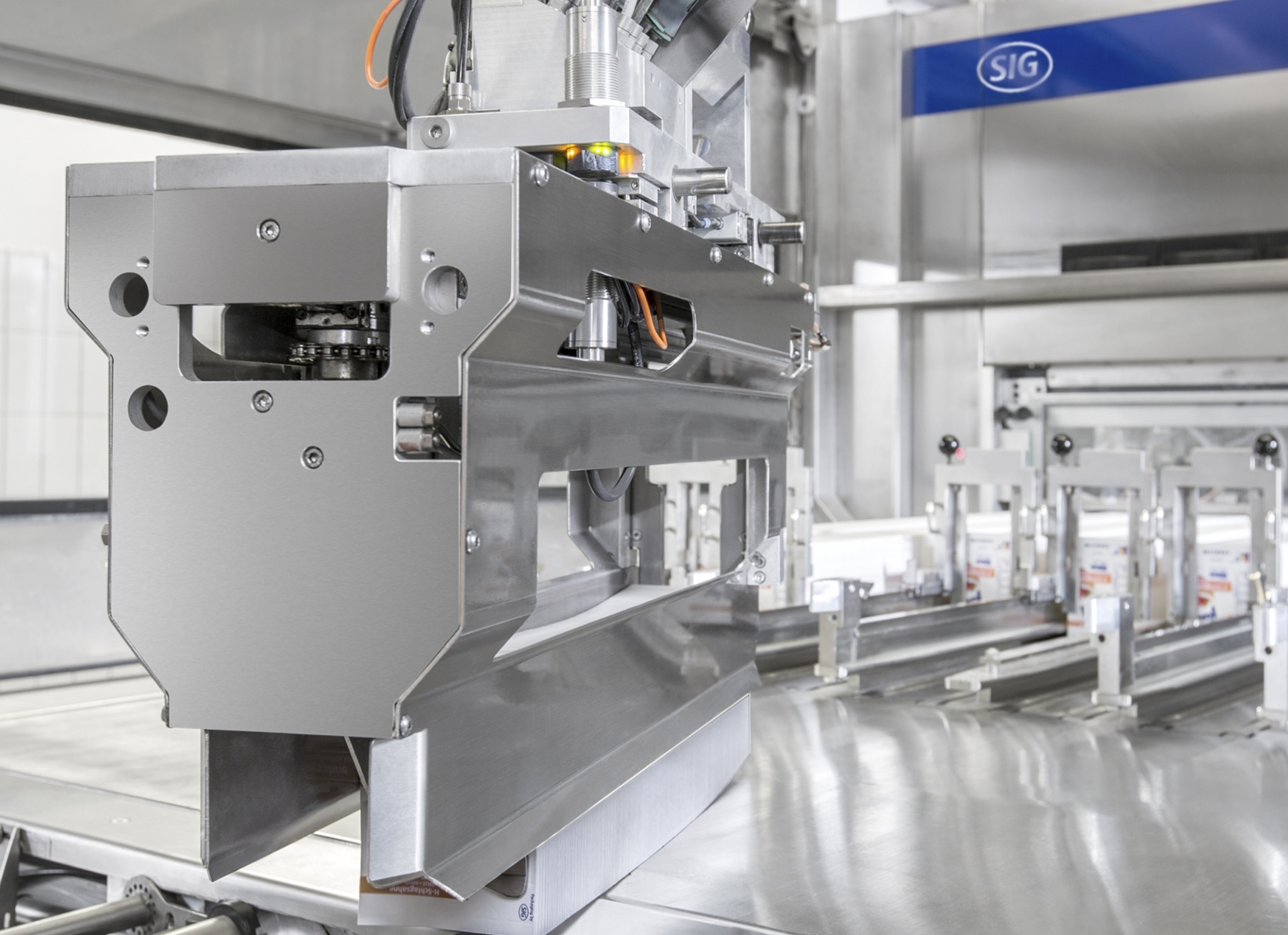 Click to EnlargeThe SIG Robotic Magazine is fully automated. The shipping boxes are removed from the pallet and opened and the filling machine is loaded with carton sleeves.

Another step forward in building fully-automated filling lines involves automated guided vehicles (AGV), which can transport packaging pallets and materials from a central store to the R-CAM.

At the same time, SIG recognizes AGV as a significant next step in packaging robotics and automation. They can transport packaging pallets and materials from a central store to the R-CAM, Mergel notes.

According to Schubert, food, confectionery, dairy, bakery, beverage as well as pharmaceutical, cosmetics and technical products are all currently benefiting from robotics in automation, in terms of increased speed and inefficiency.

21 Jan 2020 --- Aseptic packaging provider SIG is further establishing its global reach through international collaborations. In recent moves, the company has teamed up with... Read More

13 Dec 2019 --- This week in packaging, The Circular Economy for Flexible Packaging initiative (CEFLEX) launched an open consultation to further enhance and refine its Designing... Read More