You are in : All News > IFFA 2019: Multivac reports solid growth, continues international expansion and integrated digitalization

Boekstegers stated that “contrary to the general market trend,” Multivac continues to expand and achieve increased turnover, despite “economic and political uncertainties.”

“We are seeing very positive development in all the company's business units, and our production capacity is fully utilized. With a turnover of around €1.1 billion (US$1.23 billion), the Multivac Group was able to achieve in 2018 a growth in turnover of 8.5 percent over the previous year. Despite many economic and political uncertainties, we are expecting in the current business year an increase in turnover in the region of ten percent,” he said.

The continued expansion of production capacity has a high priority in the future, the Directors explained. In 2018, a new production site in Bulgaria was put into operation, which comprises a factory building for the production of Multivac parts, as well as a state-of-the-art logistics center, a training facility and an administration building.

A new Center of Excellence for slicers and automation solutions is currently under construction at the Wolfertschwenden site, and this is due for completion in 2020. The floor space of more than 17,000 square meters will also create 180 high-quality office workstations, as well as conference and function rooms which will be capable of being used flexibly. 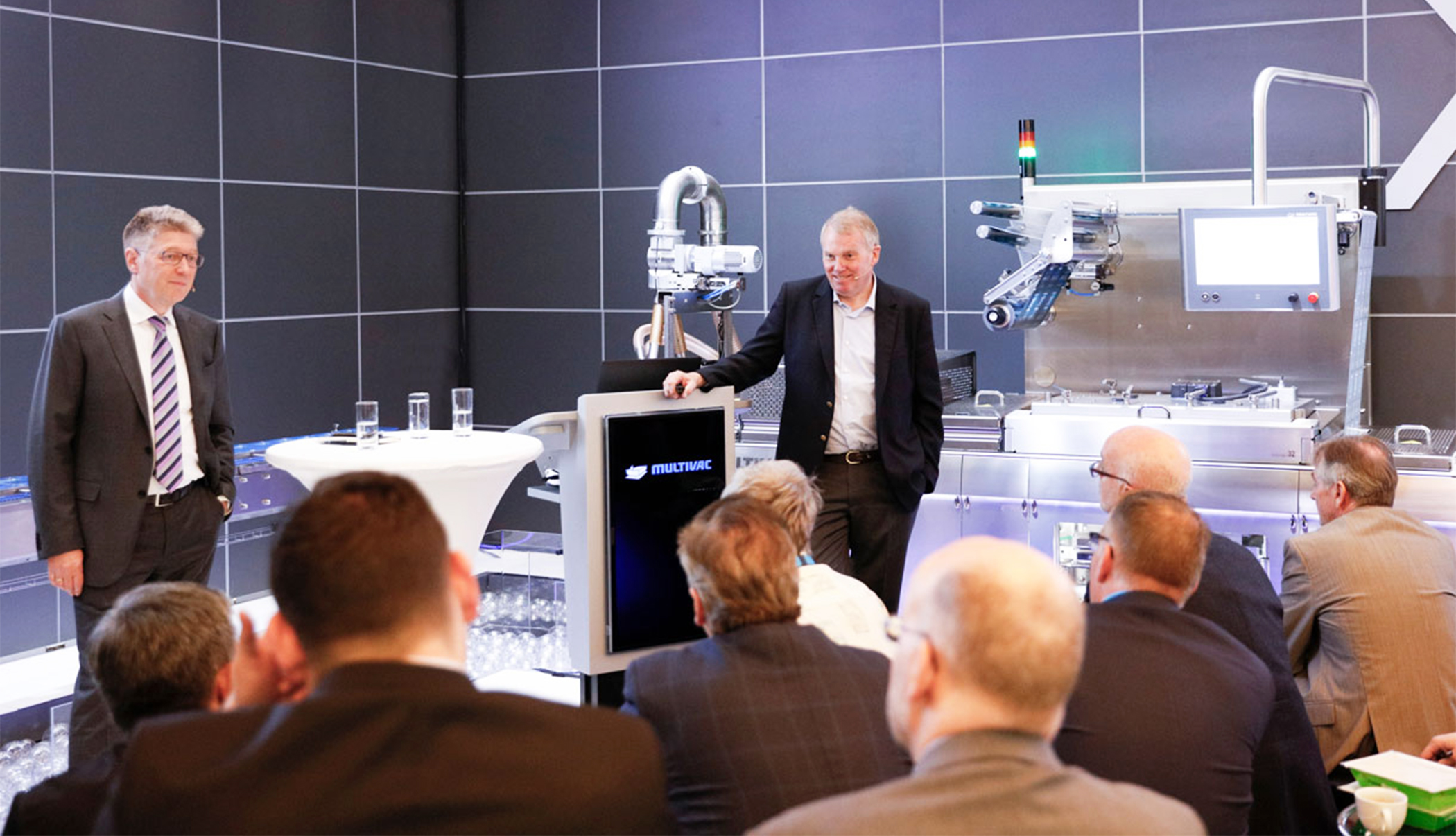 Click to EnlargeThe Directors of Multivac, Hans-Joachim Boekstegers (CEO) and Guido Spix (CTO/COO), presenting at the ongoing IFFA meat industry trade fair in Frankfurt.At the Bruckmühl site, the administration and production for the Multivac daughter company TVI will be concentrated on around 9,000 square meters on a greenfield site. Currently, a new Center of Excellence for meat portioning machines is being built there that is also due to be put into operation in 2020.

A highlight will be the Application Center designed according to customer requirements. Multivac is also currently planning to manufacture packaging machines and peripheral components in Taicang, China. In addition to manufacturing, the facility will also have development and design departments. The start of production is planned for the end of 2019.

Closed-loop system for plastic packs
In the current debate about plastic packs, there are some important aspects which are often not taken into consideration, noted Boekstegers. Plastic packs can, for example, extend the shelf-life of food products considerably and contribute to less food waste.

He added that the packaging industry has already made major progress in improving its processes and significantly reducing the consumption of plastics in the production of packs. “Packaging concepts have to take the entire lifecycle of a pack into account and also focus on the aspect of product protection,” he said.

“Our machines are designed in such a way that even today they can already run alternative packaging materials or at least be converted to run them. Thanks to our many years of experience in packaging technology, we are able to offer our customers added value by supporting them in developing sustainable packaging, which provides maximum product protection with the minimum pack footprint,” Boekstegers added.

The Multivac product range includes many sustainable packaging concepts, which make “a major contribution to reducing material usage when producing packs.” Other concepts are based on the use of renewable raw materials or fully recyclable films such as for example mono plastics, or alternatively paper fiber-based packaging materials.

“Digitalization is a fundamental component for Multivac in the development of new products, and it is therefore systematically incorporated into all packaging solutions. Following our presentation of the RX 4.0 thermoforming packaging machine at Interpack in 2017, we are now showing the TX 710 traysealer, which is a further machine in the X-line series. The features of this new traysealer are a robust machine concept and an intelligent control system, which together provide the maximum flexibility, output and reliability,” he said.

Multivac Pack Pilot is cloud-based software, which is available for both machines in the X-line series, and which supports operators in setting up the packaging machine to the optimum degree. It ensures that an industry-high output is achieved, as well as consistently high pack quality and maximum process reliability.

As part of its digitalization strategy and in conjunction with other European companies from the machinery, software and industrial automation sectors, Multivac has entered into a detailed cooperation agreement to drive forward the formation of the Open Industry 4.0 Alliance.

“Its members intend to create a standardized and open ecosystem for the operation of highly automated factories, equipment and logistics centers. The aim is to overcome isolated proprietary applications and ensure that up to 80 percent of the machines in a smart factory speak the same language,” explained Spix.

On the basis of existing standards such as I/O Link, OPC UA and RAMI, the companies plan to introduce a so-called Open Industry 4.0 Framework.

During IFFA, the TX 710 traysealer was awarded the “Meat Technology Award 2019” in the Packaging Technology Category.

21 Jan 2021 --- The packaging sector is facing unprecedented challenges during the COVID-19 pandemic, with industry players forced to innovate and adapt to drastically changing... Read More

10 Nov 2020 --- The value of bakery packaging is defined by its production, preservation, storage, transportation and marketing capabilities – all of which the COVID-19... Read More

05 Nov 2020 --- Automated packaging machine specialist Schubert is adapting and developing its services in the face of new production challenges. The COVID-19 pandemic is making... Read More