07 Jun 2021 --- The recycling rate of steel packaging in Europe has reached 84 percent, marking an all-time high, according to figures issued by the Association for European Producers of Steel for Packaging (APEAL).

This is an increase from last year’s 82.4 percent rate and makes the ninth consecutive year in which the overall recycling rate has risen in Europe.

“This latest record recycling rate also sends a clear message to all stakeholders in the value chain that steel for packaging is tried, tested and perfectly suited to a 21st-century circular economy,” Van Maercke stresses. 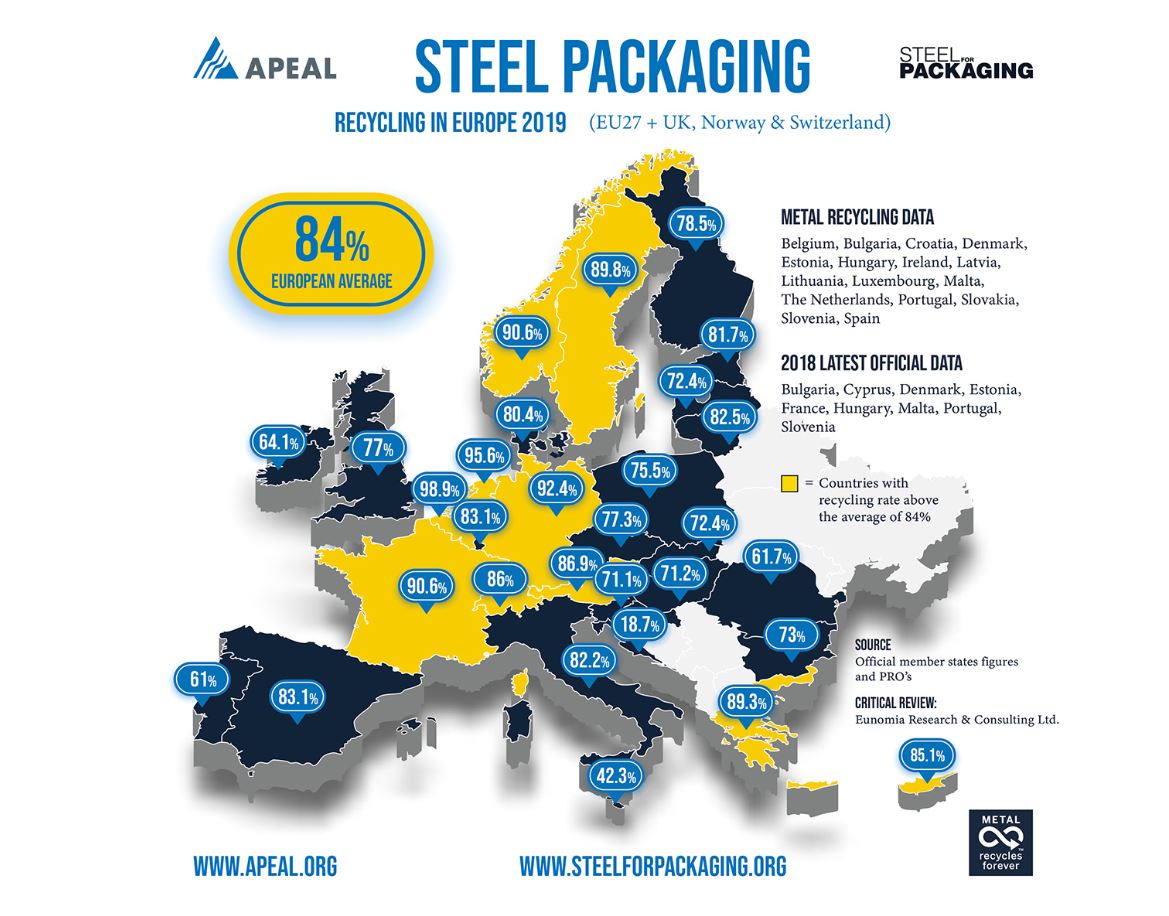 Backtracking on progress?
Overall, the recycling rate has increased in the majority of countries, but the rate has decreased in a few countries by a marginal amount.

Norway and Sweden for example are above the 84 percent average. However, Norway went down by approximately two percentage points since last year’s measurements (92.7 percent to 90.6 percent). Sweden’s figures also declined slightly from 91.3 percent to 89.8 percent.

“In some cases, this is a result of an increased tonnage of steel packaging placed on the market, which has not been immediately followed by a similar increase in recycled steel packaging,” Van Maercke explains.

Recycling rates in Ireland dropped from 79 percent in 2018 to 64.1 percent in 2019, which is a result of using data from a different source to previous years. “Had the previous source been used for the 2019 report, this would have given a recycling rate of 85 percent,” Van Maercke notes.

“However, the analysis of the data for Ireland, executed in 2021, both on the 2018 and 2019 data, showed the previous data source does not reflect the total volume of steel packaging placed on the market in Ireland.”

In Romania, another country to report a significant decrease (70.6% in 2018 versus 61.7% in 2019), the Romanian Environmental Fund Administration confirmed that the EPR-schemes for packaging reported less recycled tonnages in 2019 compared to 2018. “This led to a decrease in the overall reported recycling rate,” Van Maercke details.

2025 steel recycling vision
Despite a high overall recycling rate for steel packaging, APEAL envisions more action can be taken, especially in the countries where (more than) a quarter of steel packaging placed on the market is not currently recycled.

APEAL aims to focus on Romania, Poland, Portugal and Slovakia, where steel recycling rates lounge between 60 and 75 percent. The association has also targeted Croatia as a particular outlier, at just 18.7 percent.

“However, it will not be sufficient just to invest in infrastructure. Consumer engagement is also critical and awareness-raising campaigns are vital to ensure all steel packaging is placed in the correct recycling bin,” says Van Maercke. 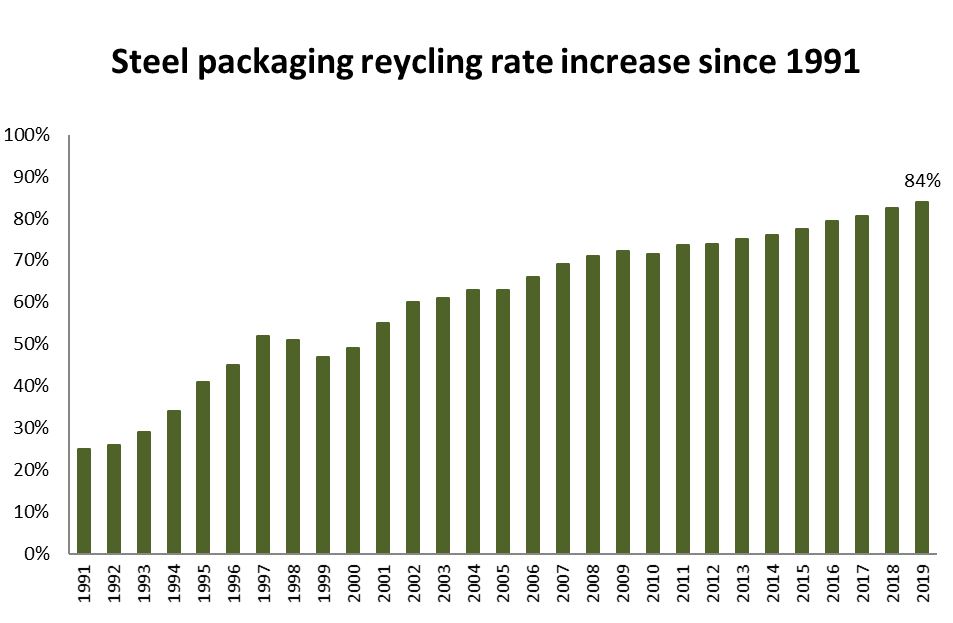 2019 marks the ninth consecutive year the steel packaging recycling rate has risen in Europe.Steel is circular by nature, he emphasizes. “Magnetic properties make steel easy to collect from any waste stream and, as a permanent material, it can be recycled over again without any loss of material quality.”

Metal packaging popularity has been on the rise. According to the Innova Consumer Survey 2021, over half of global consumers (56.57%) view metal packaging’s recyclability as either good or excellent. These figures reach up to 44.9 percent and 46.2 percent in Germany and France, respectively.

Can’t fix what you can’t measure
Later this year, APEAL will reveal a new recycling rate objective in line with the new EU calculation methodology. Applicable for data from 2020, this new methodology moves the calculation point for all member states and all packaging materials to the recycling operation entry point.

This means that no impurities can be included and only materials that are really recycled can be included in the measurement process. Van Maercke adds APEAL aims to be the first material to release its figures with the new methodology.

The methodology and data sources used by APEAL to calculate the current recycling rate have been independently reviewed, audited and certified by energy and waste specialist consultancy, Eunomia.

European Plastics Converters (EuPC) has warned Plastics Europe that its call for a mandatory EU recycled content target of 30 percent by 2030 is “legitimate and... Read More

Constantia Flexibles is unveiling an up to 80 percent recycled polyethylene (PE) film made from its EcoLam laminates’ waste, offering a high-barrier non-food... Read More