You are in : All News > Bee’ah and Chinook Sciences tackle plastic waste in UAE waste-to-hydrogen partnership 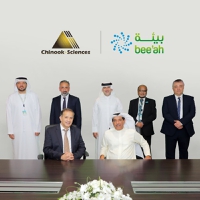 The project includes a green hydrogen (non reliant on fossil fuels) generation plant and a hydrogen vehicle fueling station, which is a development of the two companies’ existing US$180 million agreement for waste gasification to energy.

The plant seeks to address the increased market demand in the region for new renewable energy sources, such as green hydrogen, and help reduce the country’s plastic waste crisis.

RODECS technology
The waste-to-hydrogen process will use Chinook Sciences’ patented RODECS gasification and pyrolysis technology, which breaks down hydrocarbons from waste through advanced thermal treatment to release and recover green hydrogen.

The waste-to-hydrogen plant will be adjacent to a fueling station so that the project can overcome cost challenges associated with hydrogen transportation. The UAE is estimated to be the world’s fourth largest consumer of PET water bottles.

When green hydrogen is used in vehicles, it emits only water and produces no carbon emissions.

Al Huraimel says the project represents a step on the road to a circular economy in the Middle East.

“This project will showcase the potential of waste-to-hydrogen. Bee’ah has always recognized the value of energy recovery from waste, and through this new project, we aim to support a circular economy across multiple fronts throughout the region.”

Plastic waste in the UAE
The UAE has a serious plastic waste crisis, according to EcoMENA, an organization that looks for solutions to the country’s pollution issues.

Each UAE resident throws away 450 plastic bottles per year, according to waste management industry estimates. In 2011, research put the country’s aggregate annual waste at 4.3 billion bottles, with only a fraction of those recycled.

These levels make the UAE the fourth largest consumer of PET bottled water on Earth.

Around 11 billion plastic bags are also used annually, according to statistics from UAE’s Ministry of Environment and Water, adding up to an annual overall waste of 912.5 kg per capita.

Estimates also suggest that 50 percent of camel deaths in the UAE every year are from plastic waste ingestion, which can lead to massive calcified balls of plastic in the stomachs eventually killing the animals.

Abu Dhabi, one of the UAE’s seven emirates, announced plans last year to ban all single-use plastics in its territory due to the severity of the crisis.

Bee’ah’s waste conversion project will aid these ambitions, alongside other commitments by the country’s leadership to reduce carbon emissions by 24 percent by 2030.

The Coca-Cola Company has evoked ridicule after announcing its sponsorship of the 27th annual UN Climate Change Conference of the Parties (COP27) in partnership with... Read More