You are in : All News > Biodegradable boom or bust? Bioplastic innovation confronts cost and policy challenges 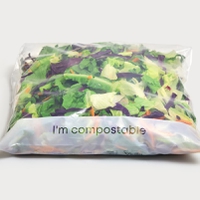 05 Jan 2022 --- As anti-plastic legislation sweeps into effect in countries around the globe, industry is looking for new ways to package F&B products without sacrificing quality, shelf life and hygiene. Biodegradable materials are an increasingly popular option, highlighted by mass investments and R&D exploration into bioplastics that break down naturally after use without harming human or environmental health.

PackagingInsights explores the latest trends, research and business developments in biodegradable packaging innovation in conversation with some of industry’s top experts.

Together with Daphna Nissenbaum, CEO & co-founder of compostable packaging giant Tipa, Gaute Juliussen, CEO of graphene bioplastic specialist Toraphene, and the European Bioplastics (EUBP) association, we examine the definition of biodegradability, its uses and misuses, policy changes, cost competition and the latest in scientific discovery.

What does biodegradable mean?
While many packaging products purport to be biodegradable, there is confusion over what the term means. Robbie Staniforth, head of innovation and policy for British recycling compliance scheme Ecosurety, has called for clarity, emphasizing that misunderstanding and industry manipulation can often lead to environmental damage.

While companies use the term to boost their environmental sustainability credentials, all too often, the reality of a material’s ability to biodegrade naturally is overstated and can result in pollution. 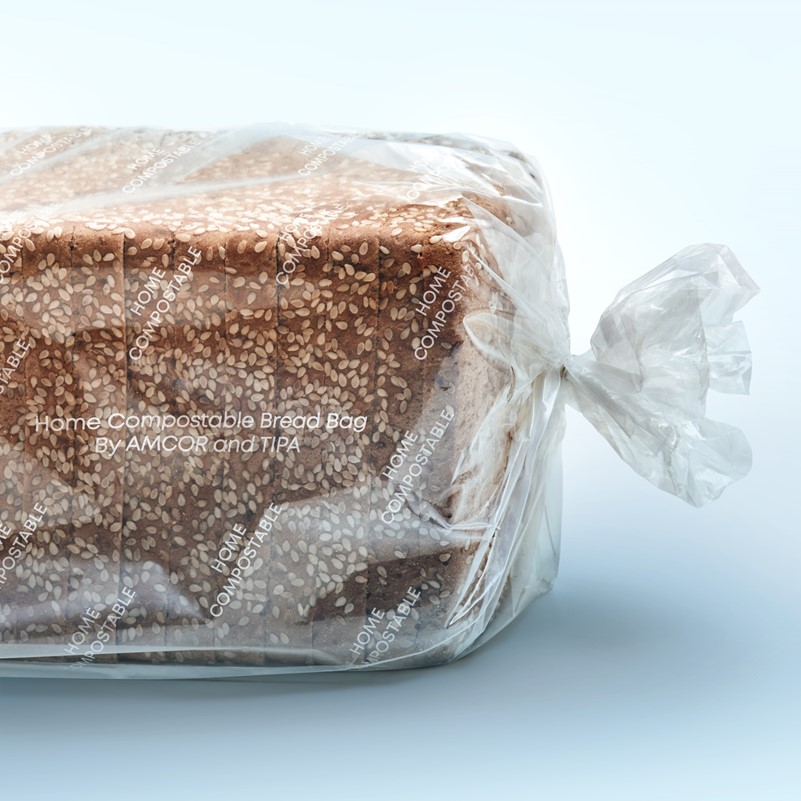 Tipa’s compostable flexible bread packaging.The UK government defines biodegradable plastics as those that can break down into water, biomass, and gases such as carbon dioxide and methane. Biodegradability depends on environmental conditions such as temperature, humidity, microorganisms present, and oxygen.

According to a consultation last year, these materials have a “limited but valid role” in applications where conventional plastic is typically too contaminated to be reused or recycled.

However, repeated concerns were raised regarding the extent to which plastics marketed as “biodegradable” actually biodegrade in the open environment. Other respondents raised concerns that biodegradable plastics could encourage littering if people consider them in some way environmentally friendly.

Bioplastic benefits
A spokesperson for EUBP explains that despite these issues, biodegradable and compostable plastics (for which there are more stringently defined characteristics) are an important answer to the world’s need to shift away from traditional, fossil fuel-based plastics.

“Biodegradable and compostable plastics add value in a range of applications, for example, where packaging is heavily contaminated with food waste and thus cannot be recycled. It mostly ends up in the residual waste where it gets incinerated or landfilled. Compostable plastic packaging contaminated with food can be organically recycled in an industrial composting plant,” the spokesperson explains.

The material properties are often similar to and sometimes even exceed the ones of the conventional material, they assert.

EUBP recently revealed global bioplastics production will more than triple over the next five years (2021-2026), according to market data compiled in cooperation with the nova-Institute.

Israeli innovations
Meanwhile, Tipa, which recently landed US$70 million in funding, is a frontrunner in designing new compostable solutions for reliably biodegradable packaging.

Nissenbaum asserts that advancing technology and communication are drawing huge amounts of consumer and investor attention to the industry.

“With the growing demand for circular and fully sustainable solutions, compostable technology has advanced, together with the infrastructure that supports it,” she says.

“More compostable films and laminates with complex characteristics have hit the market, home and industrial composting is becoming more mainstream, certifying bodies have begun to streamline the requirements for compostability, and consumers have learned to recognize compostable packaging as a fully [environmentally] sustainable solution to conventional plastic.”

She states that compostable packaging can be a central answer to the problem of flexible plastic packaging, which produces at least 30 million tons of waste per year, of which less than 2% is recycled.

Price problems
One of the main issues in bringing biodegradable packaging to market, says EUBP, is achieving cost-competitiveness with traditional plastics.

“All too often, it’s the lowest price that sells. The criticism against bioplastics as being too expensive provokes the counter-question of whether conventional plastics aren’t just simply too cheap,” the spokesperson says.

Last year, a WWF report found the actual social cost of virgin plastics is at least ten times its official pricing when accounting for its environmental impact. 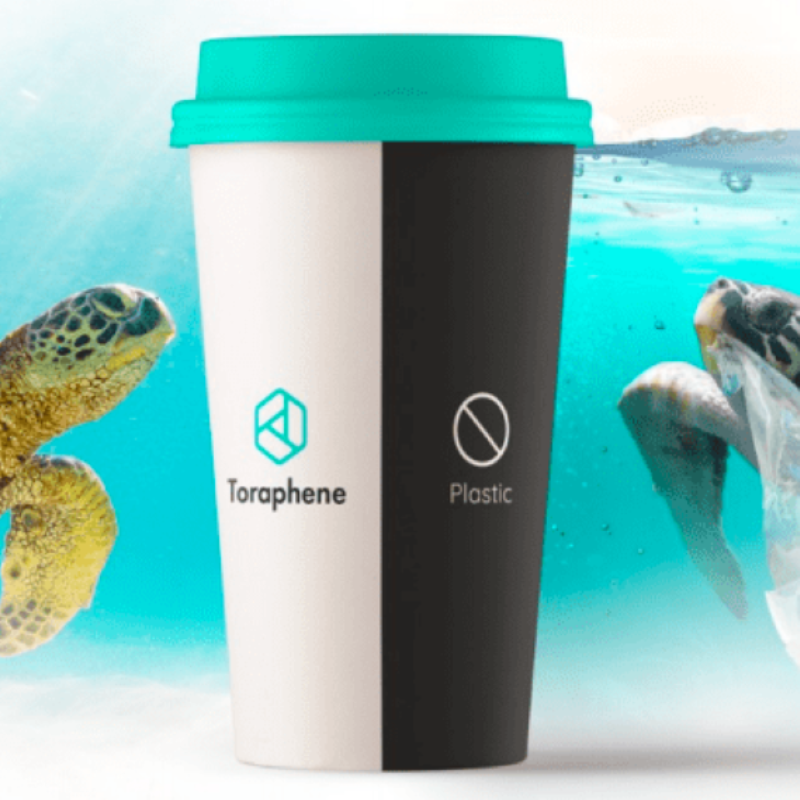 Toraphene’s graphene-based biodegradable cups.Another critical challenge is a widespread lack of acceptance in the waste infrastructure, which in many cases is based on false prejudices regarding the performance of biodegradable plastic in industrial composting, continues the spokesperson.

“Most of these challenges could easily be overcome with strong political support. Unfortunately, the EU still lacks a coherent policy. Biodegradable and compostable plastics can very well compete with conventional plastics, but politics need to ensure a level playing field,” they assert.

Greenwashing concerns
Meanwhile, Juliussen, whose Toraphene startup has created a graphene-based biodegradable material to replace plastic, says vastly insufficient policing of marketing practices and lack of punishment for greenwashing allows cheap majority fossil-fuels based blends to be marketed as bio-based, biodegradable and compostable.

“This means that actual bio-based and truly compostable products are unable to compete or even enter the market,” he says. However, Juliussen also expects bio-based, not-food-crops for biopolymer production with scaleup and costs will improve to match the scale and cost of the plastics industry.

“This [improvement] will be driven by innovation and government tax incentives, subsidies and loans,” he asserts.

“We welcome this recognition of the environmental benefits of these bioplastic products,” commented François de Bie, chairman of EUBP.

“Bio-based and soil-biodegradable mulch films help both in reducing dependence on fossil carbon sources, by using renewable carbon instead, and by playing a valuable role in reducing residual plastic pollution in soil, which can significantly impact agricultural productivity,” he says. 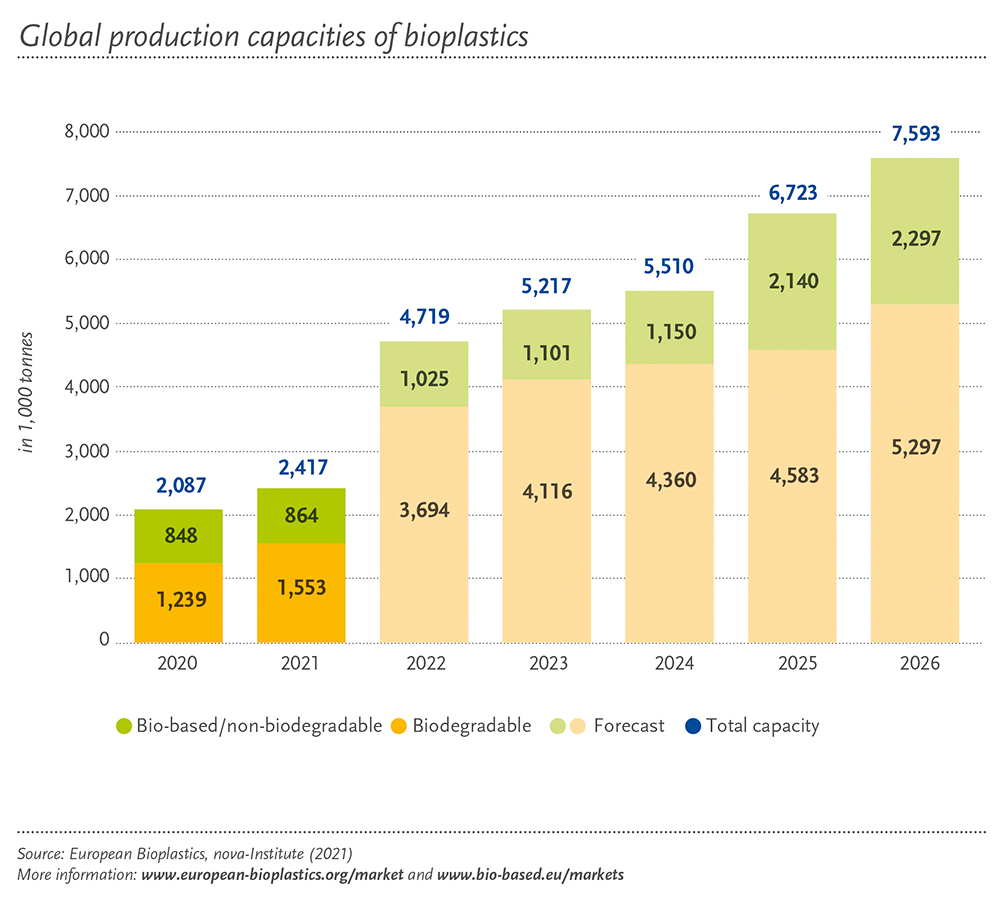 EUBP estimates global bioplastics production will more than triple over the next five years.

However, EUBP also says advances in policy measures are needed to boost the biodegradable market.

“The recognition of the important role played by biodegradable plastics in organic recycling through the revision of the EU’s Packaging and Packaging Waste Directive would be a good start,” the spokesperson says.

Meanwhile, Nissenbaum notes that while compostable packaging is classified as recyclable in the EU, policymakers need to further support the market transition away from hard-to-recycle plastics.

“Such support can translate into banning the usage of hard-to-recycle plastics from the market. To do so, governments can employ extended producer responsibility schemes that hold producers, manufacturers, and retailers accountable for the end-of-life of their packaging, along with applying plastic taxes on hard-to-recycle plastics while exempting circular solutions,” she says.

The single market dispute
Ongoing policy shifts are aiding progress for the biodegradable market, Nissenbaum stresses, but more is needed.

Italy, France and China are already banning certain plastic packaging from the market, such as shopping bags and mailing bags.

In Italy, a recent dispute has broken out over the country’s decision to exempt single-use plastics items that are biodegradable. Activists say this is a clear violation of the EU Single Use Plastic Directive (SUPD), and unless uniformity is adhered to, it could threaten the integrity of the single market.

The EUBP and companies like Tipa strongly reject this notion, asserting a rushed enforcement and unclear guidelines in the SUPD have missed a key opportunity for environmentally sustainable innovation.

Israeli compostable packaging specialist Tipa has landed US$70 million in a series C round funding in what it says will bring “breakthrough technology” to... Read More

Major retailers and FMCG companies part of WWF’s ReSource:Plastic initiative cut their use of “problematic plastic” by 57% between 2018-2020, a new... Read More

Israeli tech start-up Melodea is releasing two cellulose-based materials that it says can provide a viable solution to the world’s plastic waste crisis. Based on... Read More