The cooler will be available at 7/11 convenience store chains next March in the US – ahead of the traditional tailgating and American football season – providing on-the-go consumers a circular alternative to impulse-purchased cold beverage Styrofoam coolers.

While the Brrr Box can be used up to six times, conventional Styrofoam coolers are often used just once but pollute the environment for hundreds of years.

The material winding up in the environment pollutes the soil and its consumption can be fatal to animals.

DS Smith’s “unexpected” solution
It took four years to create Brrr Box – a major lesson in how hard it is to make an environmentally conscious cooler that works, says Battle. Packing and transporting a cooler with 12-15 oz beverages plus ice needs to be strong and prevent leakage.

As a wax-replacement box, Greencoat is US Functional Beverage Assessment (FBA)-approved, fully recyclable and repulpable. It is also water-repellent and FDA-certified food grade.

The Brrr Box achieved a Styrofoam-free alternative to convenience coolers using DS Smith’s Greencoat.“So even if you were distributing our coolers to people in hurricane areas, they could drink ice-melted water out of the cooler,” Battle adds.

It was also important in manufacturing that the cutting dyes were set up properly, avoiding pinholes in the cooler.

The end result is a cooler that is sold flat, reduces waste and drives down CO2 emissions with fewer transportation vehicles on the road.

Wide applicability for Greencoat
Brrr Box was notably attracted to DS Smith being a partner of the Ellen MacArthur Foundation, signaling a profound commitment to achieving sustainability goals and transparently reporting progress.

DS Smith shares its support for the move with PackagingInsights. “We welcome that Brrr Box is taking the concept to production and delivering a branded Styrofoam alternative,” says Melanie Galloway, vice president of sales, marketing and innovation packaging at DS Smith North America. 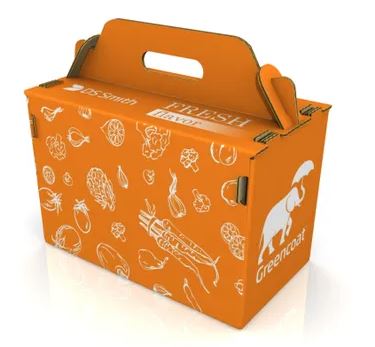 “The positive response we received from exhibiting Greencoat at Pack Expo Connect further demonstrated that retailers are aggressively searching for plastic alternatives because their customers are demanding it,” Galloway explains.

Initially, Greencoat was launched 13 years ago for poultry packaging, but since then, DS Smith has been making Greencoat prototype coolers as a showcase product at other expos and trade fairs.

She adds that Brrr Box is actively seeking other uses and markets for the cooler. “That feedback may result in changes to the design or how we manufacture the box itself.”

Preparing for postponement
Social distancing measures necessitating the cancelation of major sports events has hurt Brrr Box’s business “an awful lot,” says Battle. “But we’ll get over that.”

Mindful that the spring 7/11 launch may be postponed depending on how the pandemic develops, Battle is making his packing e-commerce-ready.

“We’re getting ready to launch an online business where we’re selling a three-pack,” he notes.

Using the databases of environmental activist groups, Brrr Box aims to gain online traction as an environment-protecting alternative to Styrofoam.

Greek flexible packaging specialist Flexopack is showcasing what it says is the only fully recyclable food packaging exhibit at IFFA in Frankfurt, Germany. The... Read More

H2 Green Steel has secured offtake supply agreements for over 1.5 million tons of its carbon-reduced steel, which it will begin producing in 2025. The company says the... Read More