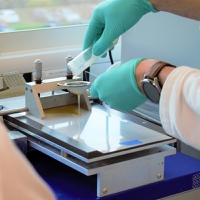 14 Jun 2021 --- Researchers at the University of Cambridge, UK, have developed a plant protein-based biomaterial that can replace synthetic materials and virgin polymers in the packaging industry. The stated aim of the research is to “eradicate the need for single-use plastics.”

Originally developed in Cambridge’s Knowles research lab, the material will be commercialized by spin-off company Xampla.

The material’s creators say it is biodegradable, marine-degradable, and as strong as conventional plastic in many household products. An initial launch in packaging applications is expected in late 2021, with a full commercial launch in 2022.

Speaking to PackagingInsights, Xampla CEO Simon Hombersley says that while the project is in its early stages, the material could have massive potential if adopted at scale.

“Xampla is focusing on microplastics applications initially, in line with our mission to address plastic pollution as a certified B Corp. Our first packaging application is sachets for dishwasher detergents, and we will be moving on to other film and coatings applications.”

“Our materials currently can compete in performance and strength with polyvinyl alcohol (PVA).”

The research is already gaining considerable attention, with former Unilever CSO and White House climate change adviser Jeff Seabright appointed as chair of Xampla. He states the company “is the most exciting innovation I have worked on.”

Xampla’s plant protein plastic film as a sachet.Mimicking spiders
The study, published in Nature Communications, describes how the researchers mimicked the production of spider silk – one of the strongest naturally occurring materials – by using a plant protein with a different composition.

“Because all proteins are made of polypeptide chains, under the right conditions, we can cause plant proteins to self-assemble just like spider silk,” says researcher Thomas Knowles.

“In the spider, the silk protein is dissolved in an aqueous solution, which then assembles into an immensely strong fiber through a spinning process which requires very little energy – those are all characteristics we keep. Even on a single-molecule level, the material looks like silk.”

Knowles explains that other researchers are looking at ways of using spider silk directly, but his team is opting to work with plant-based variations as a non-animal-based product.

Protein “alchemy”
The researchers initially chose soy protein isolate (SPI) as the test plant protein since it is readily available as a by-product of soybean oil production. Plant proteins such as SPI are poorly soluble in water, making it hard to control their self-assembly into ordered structures.

The researchers are now looking for ways to reach a commercial scale.However, a new technique uses an environmentally friendly mixture of acetic acid and water, combined using ultrasonication and high temperatures, which improves SPI solubility.

This method produces protein structures with enhanced intermolecular interactions guided by hydrogen bond formation. In a second step, the solvent is removed, which results in a water-insoluble film.

The resulting material has a performance equivalent to high-performance engineering plastics such as low-density polyethylene (PE), say the researchers.

Its strength lies in the regular arrangement of the polypeptide chains, meaning there is no need for chemical cross-linking, which is frequently used to improve the performance and resistance of biopolymer films.

The most commonly used cross-linking agents are also non-sustainable and can be toxic, whereas no toxic elements are required in this technique.

Challenges ahead
Hombersley says the principal challenge for Xampla is reaching a commercial scale, which is essential for any viable plastic replacement.

“Every category of plastic is very large, and customers need volume, quality and security of supply,” he says. “Xampla is overcoming this challenge by developing the materials as a drop-in solution for existing processes.”

“We are backed by significant investors, including an early backer of Zoom and Facebook, who can support the company to reach scale.”

Becoming economically viable is another central hurdle – one that will take time to overcome, he notes. “Natural replacements to plastic are unlikely to be cost-competitive with virgin fossil-fueled materials in the near term.”

“Regulations and taxation are driving the rollout of alternatives, and Xampla is targeting applications where regulatory and consumer drivers are disrupting the market.”

“In the longer term, cost reduction comes with optimization and scale. Fossil fuel plastics have had over 80 years of massive scaling to reduce their costs.”

F&B companies throughout the UK will soon have to alter their packaging in the wake of the death of Queen Elizabeth II last week. Iconic brands like Coca-Cola, Heinz... Read More