You are in : All News > Cold-brew coffee hits German shelves in Ardagh’s 250ml slim cans 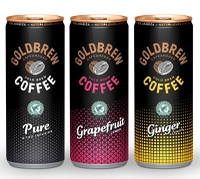 Nitro coffee, which now enjoys widespread popularity, is a cold-brewed beverage that's steeped for longer than its hot-water counterpart to give it a richer taste; the nitrogen, meanwhile – which is introduced to the coffee through a beer tap – creates tiny bubbles whose relative insolubility in water means that they persist from the first sip to the last, giving the drink its full-bodied texture and lasting head.

Ardagh, a Luxembourg-based, global leader in metal and glass packaging products, has succeeded in recreating the chemistry and theatre of this barista-made beverage with its Nitro Can. “The can’s nitrogen-charged widget brings the Goldbrew to life – first by carrying the coffee’s aroma, then by infusing its black body with that characteristic cascade of bubbles, and finally by topping it off with a tan-colored head,” explains Adriana Escobar, Product Manager at Ardagh Group’s European Metal Beverage division.

“We’ve been very pleased to work with Ardagh in the introduction of RTD cold-brewed coffee in cans,” adds Marco Beran, Sales Director at DEK Berlin. “In use, Ardagh’s aluminum beverage cans provide a shelf-stable environment for the coffee, even without refrigeration, while preserving the cold-brewed coffee's full-bodied taste. And the Nitro Can adds an exciting experience on top.”

Last month, Ardagh’s Nitro Can was also adopted by UK cocktail mixer company Funkin Cocktails in a collaboration that saw the first-ever range of RTD nitro canned cocktails hit the shelves. With premium cocktails increasing in popularity, but traditionally demanding time and skill to serve to customers, Funkin has opted for the streamlined cans to deliver its range an on-the-go format.

This month, Ardagh launched a new slimline 187ml aluminum can, specially designed for wine and wine-based drinks. With its special design characteristics and unique sizing, the new can, set to launch in Q1 2020, is the latest addition to Ardagh’s Wine Can range. The packaging solution’s capacity is a personal wine serving of 187ml – a quarter of the standard 75cl bottle – and is marketed as an attractive option for the increasing number of consumers who wish to enjoy a single drink with a meal or while on-the-go.

Ardagh Group manufactures packaging for the world's biggest brands. We have a reputation for innovation; pushing the boundaries of what’s possible, pioneering new production methods, new design techniques and new ways to recycle and save energy. The unprecedented growth of our business has been driven by our unrivaled expertise, obsession with quality and commitment to continuous improvement.

Ardagh Group has a truly global presence. We operate 109 glass and metal manufacturing facilities in 22 countries, employing approximately 23,500 people and have global sales of approximately €7.7 bn. It is estimated that in an average household globally, you will find at least six products in packaging produced by Ardagh Group.

Canpack is investing BRL710 million (US$140 million) in a new production facility in Poços de Caldas, in the state of Minas Gerais, Brazil, to increase its... Read More