You are in : All News > Do it yourself: Waitrose trials packaging-free grocery aisles, but how practical is it?

Do it yourself: Waitrose trials packaging-free grocery aisles, but how practical is it?

The supermarket is trialing a reuse and refill system at one of its UK stores, hoping to lead the transition away from a single-use society – starting with re-shaping how consumers shop 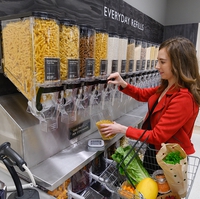 06 Jun 2019 --- In a bid to save “thousands of tons of unnecessary plastic and packaging,” high-end UK grocer Waitrose and Partners has launched a dedicated refillable zone in one of its stores. Shoppers can bring their own containers to transport dried goods such as pulses, frozen fruits and beverages, and pick up packaging-free fruit and vegetables, among other stripped back offerings. Although this “packaging-free” grocery projection is not new – many smaller independent stores use such a model – it is a notable step towards sustainability for a large supermarket such as Waitrose to take. A trial of the model is currently on track at an Oxford-based store.

Grocery stores lie at the interface between consumers and suppliers and hold a unique position to lead the transition away from a single-use society. The trial aims to not only reduce the amount of single-use plastic packaging, but is also stripping back on metal and glass. Despite retailers coming under increased pressure to tackle their massive plastic waste output, the roll-out has been met with both support and criticism as it continues to attract widespread media attention.

Included within the “Unpacked” concept will be detergent and washing up liquid refillables, wine and beer refillables, 160 loose fruit and vegetable products, and a borrow-a-box scheme, where shoppers can borrow-a-box from store to shop with and then take home before returning on their next visit.

Is it a viable, sustainable option?
Juliet Philips, Ocean Campaigner from the Environmental Investigation Agency (EIA), tells PackagingInsights that the agency fully welcomes the innovative and wide-ranging trial, noting that it demonstrates how a major grocer can “rethink our relationship with single-use plastics.”Click to EnlargeThe test will be branded strongly with “Waitrose Unpacked” across the shop to maximize awareness.

To truly tackle the plastics epidemic, companies need to fundamentally rethink how they bring products to people. “That should include refill and reuse systems, plastic-free packaging, or removing packaging altogether, a combination of approaches or totally new delivery systems – but the time has come to stop using throwaway plastic for good,” she explains.

Currently, only a third of consumer single-use plastic packaging is recycled; the rest is sent to landfill or escapes into the natural environment. The UK’s recycling record to date has relied on the export of plastic waste, without oversight as to how much is ultimately recycled nor the working conditions involved. In order to close the gulf between consumption levels and recycling capacity, it is clear that a significant focus on reduction will be required and a transition into reusable packaging has a major role to play in achieving this, Phillips explains.

Also speaking to PackagingInsights, Peter Maddox, Director of WRAP, noted how shifting engrained mindsets and inviting innovation is the way to address sustainability in packaging in the long-term.

Reuse and refillable models may well be an active component of this and certainly reflect shifting mindsets around consumption and distribution models.

“One of the challenges we all have in this sector is that we try to solve the problem with our existing mindset. If I am a food producer, the question should not be how do I pack my food? The question should be, how do I get my food from farm-to-fork. I think the idea of having new business models around how we transport goods around the economy – which is really what packaging is for – is fundamental,” says Maddox.

Consumer support for a shift in traditional consumption models, in relation to packaging, has never been stronger. In the UK, half of the population feel guilty about the amount of plastic they use and even more, 82 percent, are actively seeking to reduce the amount they throw away. These numbers come from a recent YouGov Custom survey, which also found that half would be willing to pay an additional £2 (US$2.60) or more on a grocery shop of £100 (US$130) if all of the packaging used was eco-friendly and did not include any single-use plastics.

Last year, a scathing Greenpeace UK and EIA report found that the ten leading UK supermarkets contribute more than 810,000 tons of single-use plastic to the market every year. It noted how supermarkets have a stronger focus on recycling plastic than the reduction in the use of the material and called for an overhaul.

Waitrose is not the only player seeking to bring refillable and reusable models into the mainstream. Waste management innovator TerraCycle is also tapping into this space. It announced a new platform, Loop, at the World Economic Forum this year in Davos. The home-delivery platform hopes to give consumers the option to avoid single-use and disposable models for groceries. Consumers will be able to order their food and beverages packaged in durable, reusable or fully recyclable packaging made from materials such as alloys, glass and engineered plastics.

Among the brands taking part are Procter & Gamble (P&G), Nestlé, PepsiCo, Unilever, Mars Petcare, The Clorox Company, The Body Shop and Coca-Cola.Click to EnlargeCritics have said that supermarkets have a stronger focus on recycling plastic than the reduction in the use of the material and called for an overhaul.

Reality bites?
However, critics have noted that there are some barriers for the mainstreaming of refillable packaging stores. For example, they may not only make grocery shopping more time-consuming and strenuous for busy consumers but they also neglect the primary function of packaging – to protect food and reduce loss from food waste.

Food waste is widely considered to be one of the biggest sustainability challenges and one that advanced barriers provided by packaging can help to minimize. An estimated 1.3 billion tons, or 32 percent of all food produced globally, are lost or wasted each year.

In this way, some supermarkets have taken a different sustainably approach – one which does not demonize packaging, such as the Co-op.

“We’re always open to innovation but we take a more holistic approach to make packaging recyclable and reducing single-use plastics across the whole store rather than tackling individual aisles. Plastic has massive benefits for carbon reduction, reducing food waste and adding convenience, so for us, it’s more about driving sustainable change within the plastic supply chain,” Rob Thompson, Packaging Technologist at Co-op, tells PackagingInsights.

“Our preferred solution is to make all our plastics recyclable and to use as much recycled content as possible. Plastic should be seen as a valuable resource for us to collect and recycle, keeping it in the economy and out of the ocean.”

However, Phillips notes that the correlation between single-use plastic packaging and food waste is not simple. “WRAP estimated that in 2017, 37,000 tonnes of pre-wrapped salad were thrown away in the UK. Customer education can play a significant role in addressing this challenge,” she says.

Included within Waitrose’s “Unpacked” concept is:

“This test has huge potential to shape how people might shop with us in the future so it will be fascinating to see which concepts our customers have an appetite for. We know we’re not perfect and have more to do, but we believe this is an innovative way to achieve something different,” concludes Head of CSR for Waitrose & Partners, Tor Harris.

The test, which will be branded strongly with “Waitrose Unpacked” across the shop to maximize awareness, will run until August 18 as the supermarket seeks as much feedback as possible.

15 Jan 2020 --- Closer collaboration between supermarkets and recycling companies is crucial to raising recycling rates, according to Dan Cooke, Head of Sustainability for Viridor,... Read More

02 Dec 2019 --- Despite public commitments to reduce the use of virgin plastic, the plastic packaging sold by major UK supermarkets has risen to more than 900,000 metric tons... Read More

18 Oct 2019 --- In industry news this week, Braskem announced the addition of a fully circular post-consumer resin (PCR) product range under the umbrella of its “I’m... Read More

08 Oct 2019 --- British-Dutch transnational consumer goods company Unilever has pledged to halve its use of virgin plastic by 2025. It aims to reduce its absolute use of plastic... Read More

07 Oct 2019 --- Introducing a charge on disposable coffee cups would be more effective than the widely-used system of offering a discount to customers who bring their own reusable... Read More