You are in : All News > EIA and Greenpeace find UK supermarkets “treading water” on plastic reduction, urge refill revolution

28 Jan 2021 --- Too many leading UK supermarket chains are “treading water” in the fight against mounting plastic pollution, according to the UK Environmental Investigation Agency (EIA)’s latest plastics survey.

This year’s scorecard shows Waitrose at the top for the second consecutive year, with Iceland in tenth place.

“The final scorecard is always a surprise as we are assessing so many factors that make up the final result,” lead author Christina Dixon, senior ocean campaigner at EIA, tells PackagingInsights.

“It is a compilation of assessment on progress on plastic reduction, progress on introducing reuse, commitments on reduction and reuse, recycling and recycled content, supply chain engagement and transparency,” she details.

The report also shows the ten leading supermarkets collectively put almost 900,000 metric tons of plastic packaging on the market in 2019.

While this is a reduction of 1.6 percent over the previous year, it is a 1.2 percent increase compared to 2017, when the ten supermarkets put 886,021 metric tons of plastic packaging on the market.

“We had hoped to see a much sharper downward trajectory as strategies and targets bear fruit. Instead, we are looking at a relatively static picture – the sector urgently needs to pick up the pace,” Dixon adds. 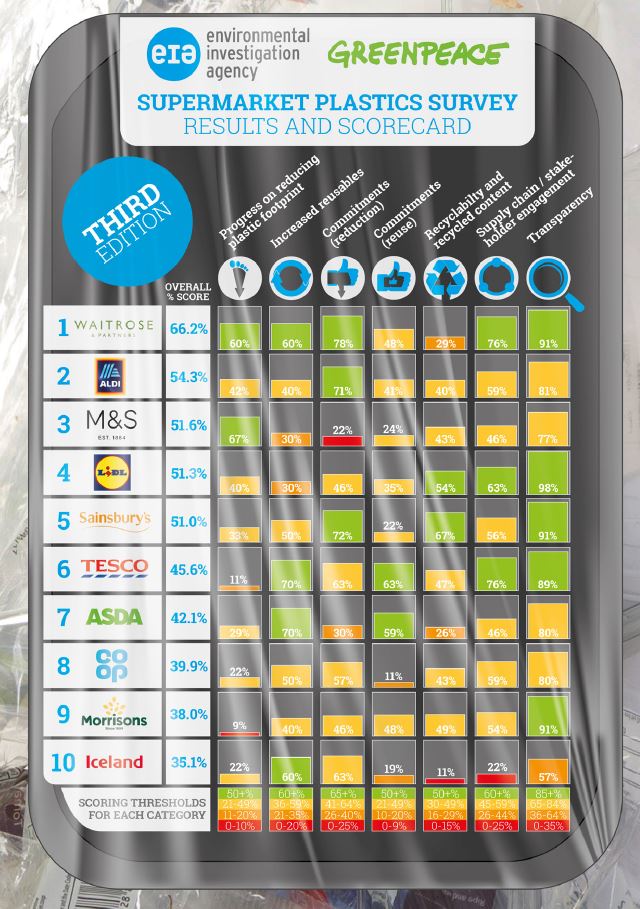 Click to Enlarge“The future we want to see is packaging-free aisles and reusable containers and bags as the norm,” says lead author Dixon.Plastic reduction strategies
Removing and reducing plastic packaging was identified as a major barrier to progress. Sainsbury’s, Tesco, Asda, Coop, Morrisons and Iceland all scored less than 40 percent in plastic footprint reduction.

“It’s notable that companies that have previously scored lower – Sainsbury’s, which was bottom in our first year, alongside Lidl, and Aldi, which were at the bottom of our 2019 assessment – have now risen in the league table due to the increased focus and maturity of their plastic reduction strategies,” notes Dixon.

Since the first report in 2018, packaging from branded goods has been shown to be increasing.

“Some retailers have reduced own-brand packaging significantly, however, increases in plastic packaging from brands are harder to manage,” highlights Dixon.

Reusability is the main criterion
From EIA’s perspective, the commitments on reuse are how companies can better define their reductions strategies.

“This offers reassurance that this won’t be achieved through substitutions to other materials or flimsy plastic that poses a risk to the environment,” Dixon explains.

According to the third report’s scorecard, Tesco leads the reusability commitment category with 63 percent, followed by Asda (59 percent), Waitrose and Morrisons (both 48 percent).

Having actually increased reusables in stores are Tesco, Asda (both 70 percent), Waitrose and Iceland (both 60 percent).

Tesco’s partnership with Loop is the only national rollout of reusable and refillable packaging, while similar initiatives from other nine retailers, such as Asda and M&S, remain in trial stages.

Waitrose expands refill trials
This week, Waitrose confirmed its latest plans to expand its refillables trial in store aisles. This trial will test whether customers will incorporate shopping for unpacked items in their routine shopping trips, rather than visiting a separate part of the shop.

“While we recognize the sector is still in the testing and exploration phase of rolling out reuse nationally, we want to be clear that this is a priority area,” Dixon maintains.

Lacking infrastructure and knowledge still impede retailers to deliver on reusability goals. “We hope over the coming years the tests and trials can be adapted and expanded, with support by ambitious policy to create the enabling environment required,” says Dixon. 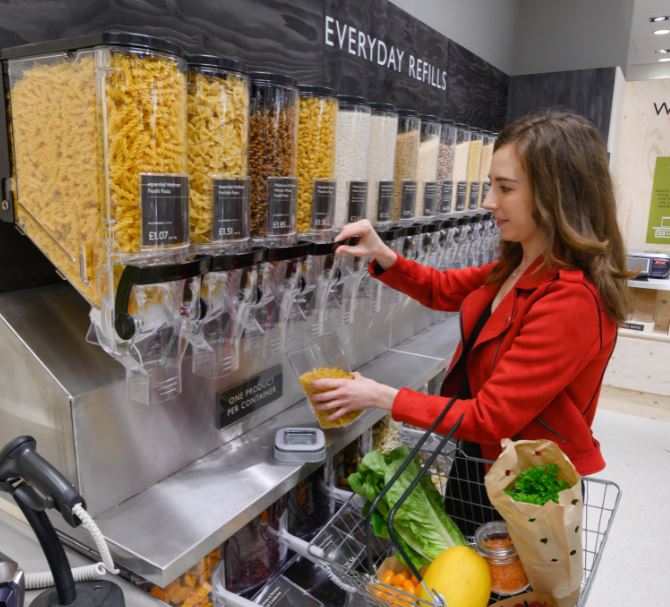 Click to EnlargeWaitrose topped the EIA’s scorecard and expanded its refillable trial in UK stores this week (Photo credits: Waitrose).She adds that progressive policy on things like Extended Producer Responsibility, Deposit Return Schemes and transparency will level the playing field across the sector.

Pandemic expectations
Although this report focuses on the 2017 to 2019 period, Dixon has already shared some predictions for next year’s report.

Potential pandemic-induced barriers to delivering plastic pollution strategies include new shopping experiences, the growth in online shopping and the shift to increased “scratch” cooking as restaurants were closed.

“We understand that panic-buying increased demand and issues with supply chains forced companies to loosen packaging requirements in 2020,” says Dixon.

Non-recyclable black plastic and plastic egg boxes made a return despite progress in recent years to eliminate these items.

“However, the original packing requirements did go back to normal in most cases after the first wave. In some cases, the disruption actually led to a decrease in plastic,” she notes.

“Pieces of packaging like yogurt pot lids became unavailable, which helped supermarkets to realize they actually did not need these items.”

“Checking Out on Plastics III” is technically the 2020 publication reporting on 2017 to 2019 findings, but was delayed in its publication.

27 Jan 2021 --- The Alliance to End Plastic Waste is hitting back at accusations of greenwashing after a Greenpeace chief labeled the industry organization a sham designed to... Read More

22 Jan 2021 --- The Alliance to End Plastic Waste, a collaboration of over 50 top plastic industry players, has come under a fresh tide of criticism following an investigation... Read More