You are in : All News > EUBP: “Reviewed EU bioeconomy strategy strengthens defossilization of plastics sector” 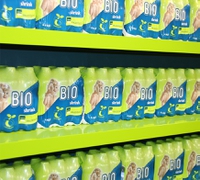 18 Oct 2018 --- European Bioplastics (EUBP) has expressed its support for The European Commission’s recently delivered review of the 2012 European Bioeconomy Strategy. The strategy is a step forward towards ensuring that fossil resources are replaced by sustainable natural alternatives for the production of bio-based products such as bio-based plastics and energy, says EUBP. “Only by driving the transition in relevant markets will it be possible to reach Europe’s climate change mitigation goals,” says Hasso von Pogrell, Managing Director at EUBP. “Implementation of the key actions of the updated Bioeconomy Strategy is paramount to making this happen.”

The strategy focuses on the importance of a stable regulatory framework as well as on research and innovation to accelerate the growth of the bioeconomy, which is already worth around €2.1 trillion (US$2.4 trillion) in annual turnover in Europe. Specifically, the bioplastics industry not only helps reduce greenhouse gas emissions but also contributes to employment growth in Europe and to the development of rural areas, EUBP highlights. “The bioplastics industry is a main driver of the bioeconomy,” von Pogrell says. “According to a study of EuropaBio, it accounts for about 23,000 jobs in Europe. With suitable investment and regulatory frameworks, this number could increase by 2030 with up to 300,000 high skilled jobs.”

European Bioplastics welcomes the Commission’s support for using bio-based feedstock for the production of plastics. Furthermore, the strategy underlines that bio-based plastics should be mechanically or organically recyclable and by this links the concepts of bioeconomy and circular economy.

The new document aims at fostering research into plastics which are biodegradable in the marine environment and refers to the currently debated draft directive on marine pollution and single-use plastics. “While marine biodegradability can be an interesting property, it is important to clearly define for which materials and applications and under which conditions it is meaningful. In the context of single-use plastic items, European Bioplastics considers soundly established land-based waste management as the key to fight marine pollution,” states von Pogrell.

As the European Bioeconomy Alliance (EUBA) has already pointed out, the Bioeconomy Strategy should deliver the following five policy priorities in order to ensure Europe’s leadership in the sector: making the circular bioeconomy an integral part of EU‐level frameworks and policies; increasing funding and improving coherence of financing mechanisms for the circular bioeconomy; securing the Bio‐Based Industries Joint Undertaking (BBI JU) 2.0; creating incentives for bio‐based products in strategic sectors; and promoting bio‐based products’ visibility to stimulate market demand.

Speaking to PackagingInsights in August, von Pogrell stressed his concerns that the EU does not provide bioplastics with an “equal platform to conventional plastics and biofuels.”

“We want a level playing field for bioplastics when competing for markets and raw materials,” said von Pogrell. “Currently, both the oil industry and the biofuels are greatly subsidized and, whereas we do not seek for subsidies ourselves, is it time for the EU to phase out those existing (oil) subsidies.”

“To our mind, this new EU legislation on single-use plastics is being pushed through much too quickly and without considering all the possible alternatives,” said von Pogrell. “We all agree that we need to reduce the amount of single-use plastics, but we must also be aware that we are not going to be living in a world without it – food will still need to be wrapped and transported – so the question is what the most sustainable solution for that is. I think an outright ban without having actual solutions in place is difficult.”

“The Commission seems to be thinking about paper and cardboard as a sustainable solution, but I am not sure that this has been thought through,” says von Pogrell. “Many paper and cardboard packs are prone to contain potentially dangerous legacy elements from former recycling. Therefore, and for reasons of barrier properties, in many cases they need a layer of plastic, and that, of course, creates biodegradability issues. However, a bioplastic coating on a paper package is a good solution because it can create a 100 percent biodegradable package,” he added.

More recently, EUBP reported that The European Parliament’s (EP) report on the European Strategy for Plastics, adopted in September by the plenary, testifies to the increasing acknowledgment and endorsement of the value propositions of bioplastics.

Zero Waste Europe (ZWE) has sent a call to action to the EU regarding the rules for incineration residues and misinformation on its relation to landfills. It reports... Read More

Aquapak is announcing an exclusive distribution deal through which Resinex will supply high-performance barrier films made from Hydropol polymers to Europe. When... Read More

The University of Queensland (UQ), Australia, is set to become a hub for bioplastics research after receiving an AUD$13 million (US$9 million) grant for research into... Read More