You are in : All News > Fibi-buffer leverages Sealpac thermoformer for biodegradable buffer packaging commercialization

13 Jul 2021 --- Dutch start-up Fibi-buffer is expanding its biodegradable shock-absorbing buffer packaging production toward full-scale commercialization, and “secretly dreaming” about production locations outside of the Netherlands.

The company produces biodegradable buffer packaging cubes that protect high-value goods against shocks and impacts during transport and storage.

BASF supplies Fibi-buffer with the basic raw material called ecovio, while Sealpac provides the RE25 thermoformer on which the buffers are produced.

“When Fibi-buffer approached us, we did everything within our power to get them going,” Marcel Veenstra, Sealpac’s marketing manager, tells PackagingInsights.

“We believed in [the founders’] concept and they rewarded us by buying our thermoformer. It is not our daily business to invest on this level, but we are quite susceptible to it.”

Fibi-buffer’s commercial endeavors include partnerships with various packaging material wholesalers, such as Storopack, Ratioform and DS80. 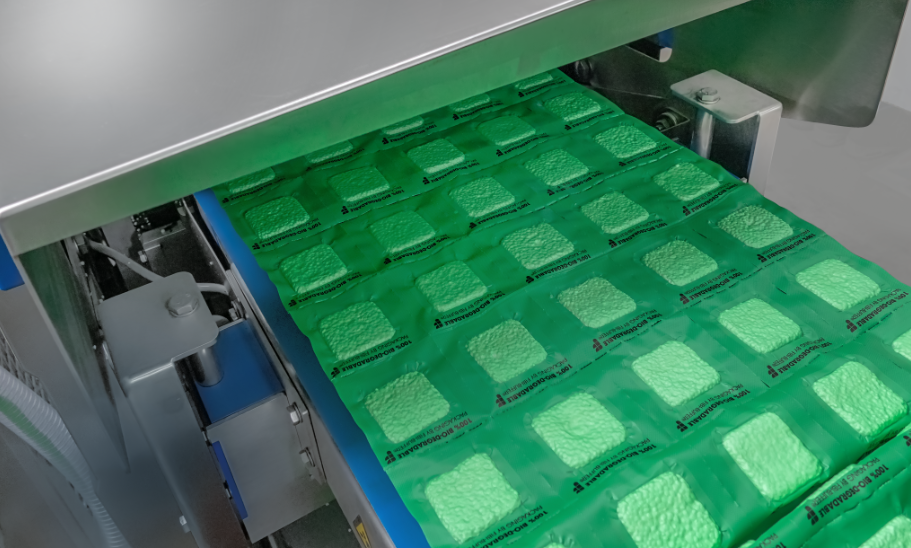 The biodegradable film’s elasticity requires the RE25 to use a motor drive when unwinding the top film.

Veenstra highlights Fibi-buffer does not currently have F&B packaging applications, as most food requires barrier protection beyond the solution’s capabilities. “It would work, but not with enough shelf life, possibly increasing food waste,” he notes.

Finding the right material
Polystyrene foam, commonly referred to as styrofoam, has been used for decades to protect products during shipping. However, it is often discarded after one use, partly because it is customized in shapes for specific applications. Crucially, polystyrene is being increasingly restricted by European regulations.

Instead, Fibi-buffer uses BASF’s ecovio granulate, which is industrially compostable and fully biodegradable, according to the European composting standard EN-13432. This means microorganisms automatically break down the material in an oxygen-rich and moist environment. 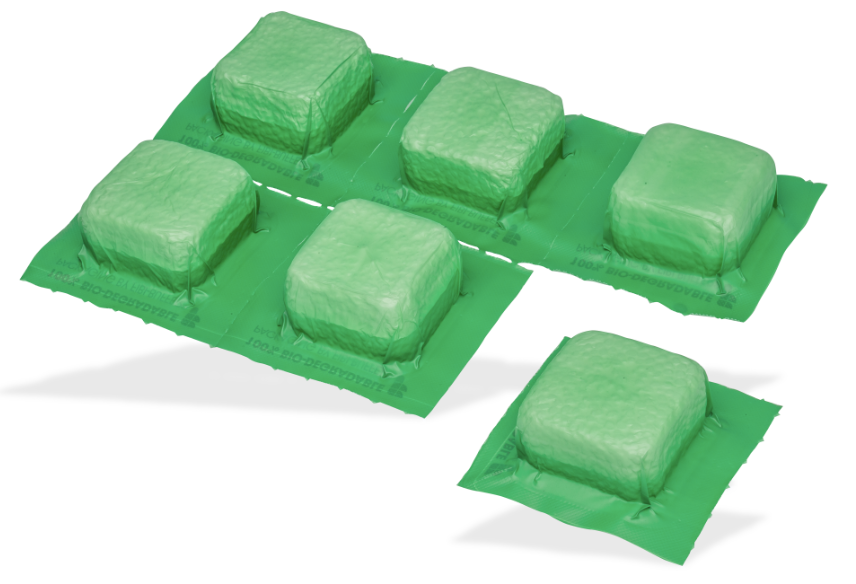 Each cube can be removed separately so the buffer material can be folded into diverse shapes.  Since the cubes are packaged in thin films, they also retain their shape and do not break off into small particles. The cubes also perform at a similar durability level to polystyrene foam and “significantly better” than air bags, according to Sealpac. Moreover, air bags can sometimes leak.

“Indestructible” thermoformer
The cubes are packaged on Sealpac’s RE25 thermoformer, which has proven to be “the most stable and predictable factor in the entire process,” says Fibi-buffer co-founder Peter Westgeest.

The RE25 has a 5.6 index, resulting in 30 cubes per stroke. After a certain number of strokes, the produced reel is folded and placed in a large box via an extended out-feed.

“I dare say the thermoformer has proven to be indestructible, especially when you consider an extremely light product is being packaged,” Westgeest concludes.

Environmental non-profit Habits of Waste (HOW) is calling out the wasteful packaging practices of e-commerce giants like Amazon, Walmart and Target. Dubbed... Read More