You are in : All News > Fully automated BreadBot really is “the best thing since sliced bread,” says developer 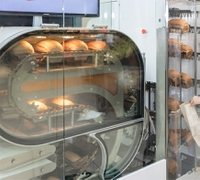 10 Jan 2019 --- Family-owned The Wilkinson Baking Company has unveiled The BreadBot – the world’s first fully automated bread making machine – at the ongoing Consumer Electronics Show 2019 in Las Vegas (CES). The BreadBot turns flour into loaves all on its own, producing bread which is fresh, healthy, preservative-free and eco-friendly in comparison to center aisle bread. The system is aimed at re-establishing an “emotional connection with the shopper” that has been lost in an age of industrial food production.

“Believe it or not, the last time there was a major innovation in the way bread was made was 1912, with sliced bread,” Randall Wilkinson, CEO of The Wilkinson Baking Company, tells PackagingInsights.

“In the age of home delivery, the BreadBot attracts consumers back to the store. Consumers want fresh, delicious bread that is produced with theater and engagement,” he says.

“The commercial bread category at retail has, for many years, been stagnant if not declining. Yet, with the announcement of the BreadBot at CES 2019, social media exploded with interest in the BreadBot. We believe this reflects the pent up demand for fresh, tasty bread,” adds Wilkinson.

The BreadBot mixes, forms, proofs, bakes and cools ten loaves of bread per hour – all on its own – and is capable of making most varieties of bread that require dry ingredients. This includes white, wheat, whole wheat, nine grain, sourdough and honey oat. The bread can also be made organic. 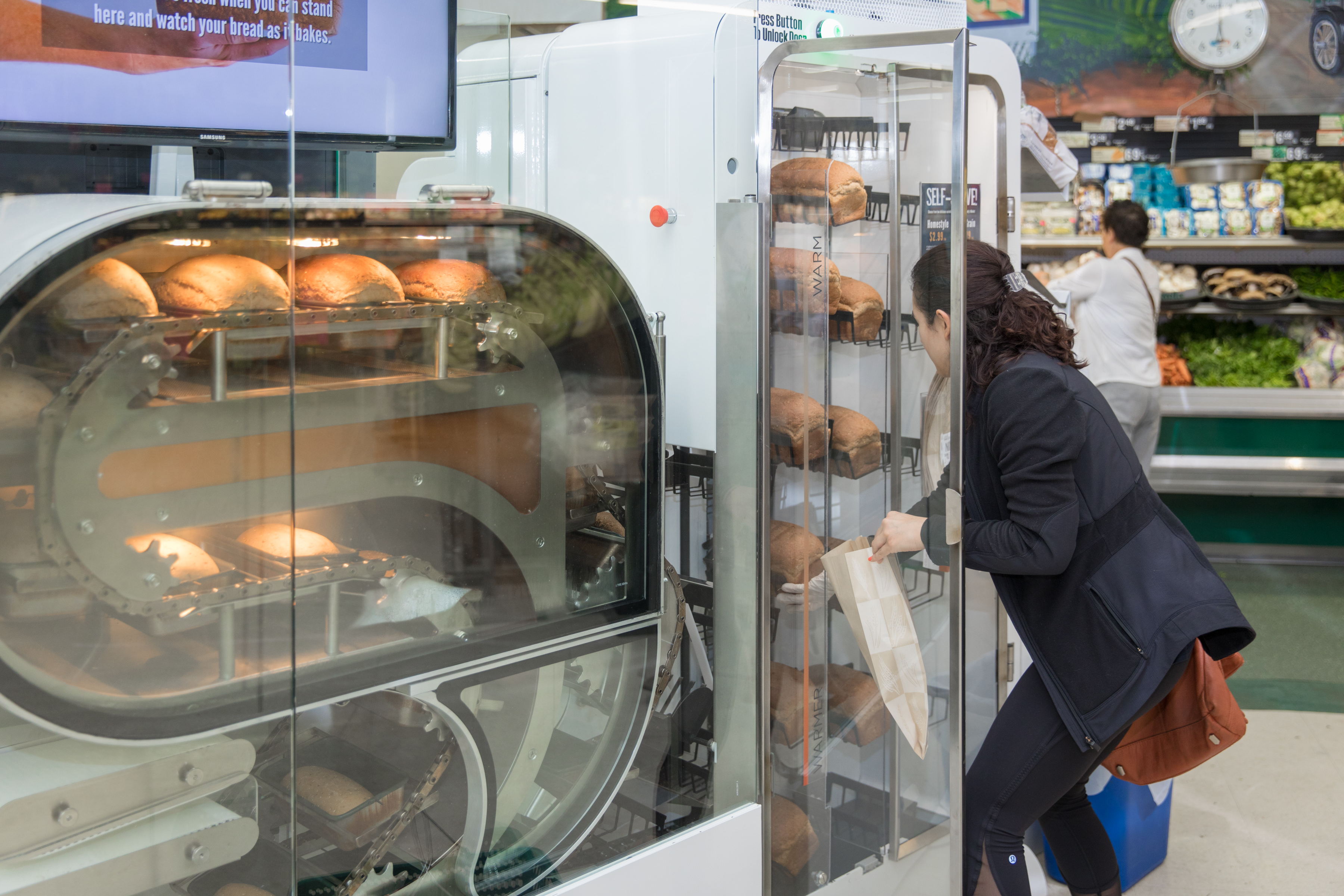 Click to EnlargeThe BreadBot developers believe that retailers' bread sales can increase by 30 percent using this fully automated machine.Energy-efficient, cost-effective
Retailers using The BreadBot can benefit from a potential 20-fold lift in bottom line profit margins through the elimination of the costly current bread distribution process, as well as benefiting from increased consumer interest and maximized employee productivity, the company says.

Grocers can get a head start on their daily production demands by scheduling The BreadBot to start baking hours before they open. Additionally, The BreadBot is disrupting commercial baking and helping the environment through the elimination of brick and mortar facilities and distribution overhead, the company also states.

“The extended time requirements of the central factory’s model for distribution means that preservatives are added to manufactured bread to ensure greater shelf-life. Production within the grocery store, which the BreadBot enables, serves to eliminate the need for those preservatives,” says Wilkinson.

“Excess sugar is also often added to compensate for the loss of bread’s initial aromatic flavors, which diminish in the first 2-4 days. The BreadBot’s preservative-free loaves maintain delicious flavor and avoid the need for excess added sugar,” he says.

Furthermore, the traditional model of making light, fluffy loaves of bread in central factories demands fleets of trucks, large amounts of fuel and congested traffic to get them to thousands of stores. “The health of our environment is a vital concern and every BreadBot will decrease environmental overhead,” adds Wilkinson.

How The BreadBot measures up:

20 years in the making
The Wilkinson Baking Company explains that the BreadBot took 20 years to develop. The major challenge was “mastering the consistent management of a sometimes quirky biological process by a mechanical device,” continues Wilkinson.

“Add to that the early lack of sophisticated sensors, actuators and PLCs needed to support our vision for the BreadBot and you’ll understand the time it has taken to complete the project,” the says.

Fully developed, the BreadBot contains over 100 sensors to monitor bread quality and bread location. The machine is making constant adjustments on a millisecond basis from mixer speed development of the loaf, forming time and speed, proofer temp, proofer humidity and oven temperatures.Click to EnlargeMost food providers – including grocery stores, convenience stores and schools – can benefit from the compact 22-square-foot BreadBot, which is “more automated than a US$75 million bread factory,” the company says.

Commercialization
The BreadBot team explains that the immediate focus is on establishing the machine in the retail grocery sector. “We envision a future where the BreadBot will be found in any facility where there is a need to provide bread to consumers at scale,” Wilkinson tells PackagingInsights.

The BreadBot is currently in operation in one location, at Andy’s Market in College Place, WA, US.

“The BreadBot operates on a lease model, therefore it is not technically for sale. We are currently ramping up production and at the beginning of Q2 we will begin initial tests in partner grocery stores. Currently, three of the country’s top five grocery retailers are committed to testing The BreadBot,” says Wilkinson.

The BreadBot is currently on display and on the menu at CES 2019, where visitors can “taste its healthy, flavorful bread and view the production process in action.”

“Bread is a staple of American life. But in most supermarkets today, it has lost its emotional connection with the shopper,” says Wilkinson. “In the age of home delivery, The BreadBot attracts consumers back to the store because it delivers fresh, delicious bread that is produced with theater and engagement,” he concludes.

21 Jan 2021 --- The packaging sector is facing unprecedented challenges during the COVID-19 pandemic, with industry players forced to innovate and adapt to drastically changing... Read More

24 Nov 2020 --- Smurfit Kappa is joining forces with KHS to roll out its corrugated cardboard recyclable TopClip multipack can carrier, a solution that can replace shrink... Read More

10 Nov 2020 --- The value of bakery packaging is defined by its production, preservation, storage, transportation and marketing capabilities – all of which the COVID-19... Read More

05 Nov 2020 --- Automated packaging machine specialist Schubert is adapting and developing its services in the face of new production challenges. The COVID-19 pandemic is making... Read More