16 Sep 2020 --- UK supermarket chain Iceland Foods is calling on its national government and rival retailers to commit to enhanced transparency in plastic packaging reporting. Iceland aims to eliminate plastic packaging from its own-brand portfolio by 2023.

“Without transparency and government-enforced reduction targets, we will not be able to judge whether business actions are delivering real progress,” states Richard Walker, managing director of Iceland Foods.

“For several years now, businesses have been using incomplete information to represent the scale of their plastic packaging, their commitments to change, and the progress being made. We will all be better served by a more accurate and transparent picture on this issue.”

Iceland’s mission to reduce plastic pollution throughout the retail chain is supported by environmental lobby groups Greenpeace and Friends of the Earth. The industry-lobbyist collaboration calls on retail and wider business to implement stronger plastic pollution reduction targets.

Environmental campaigners Greenpeace, Friends of the Earth and A Plastic Planet reveal to PackagingInsights how the news might motivate large-scale retailers to join Iceland in increasing transparency.

“Imagine if instead of ‘pledging’ to tackle plastic pollution, major organizations held their hands up, told the truth and made real efforts to eradicate the use of this toxic material across the board. Now that would make a real difference,” highlights Sian Sutherland, co-founder of A Plastic Planet.Click to EnlargeIceland Foods is calling on the UK government to enforce mandatory reporting on plastic packaging in forthcoming legislation.

While it is “great to see” Iceland taking the lead on transparency on its plastic footprint, others “need to follow suit,” comments Tony Bosworth, Friends of the Earth campaigner.

Schrank maintains that some larger UK retailers have provided some information about plastic packaging before, but “never with this level of details and usually only in answer to direct questions.”

In 2018, the UK supermarket committed to eliminating all plastic packaging from its own-label products by the end of 2023. It also promised to reduce its own-label overall packaging footprint by 10 percent within five years as of 2018.

The supermarket will replace plastics on own-brand packaging with recyclable paper, pulp trays and paper bags – both via domestic waste collection and in-store facilities. Since 2018, Iceland has witnessed a 29 percent reduction in plastic.

Currently, Iceland represents 2.5 percent of the UK grocery market. Despite it being “smaller than many of its competitors,” Schrank points to the retailer’s “good track record” on tackling environmental issues.

“Back in the 1990s, they pioneered a range of ozone-friendly fridges and freezes using GreenFreeze technology, which has since become an industry standard,” she recalls.

Supermarkets watch each other’s moves “very closely,” she highlights, and corporate leaders know that customers are concerned about plastic waste and want them to act.

A 2019 YouGov poll for Friends of the Earth, another campaign supporter, showed that 88 percent of interviewees supported a law to ensure manufacturers and retailers phase out all non-essential single-use plastic by 2025. Specifically, it highlights that 86 percent of consumers believe retailers and supermarkets should be doing more. 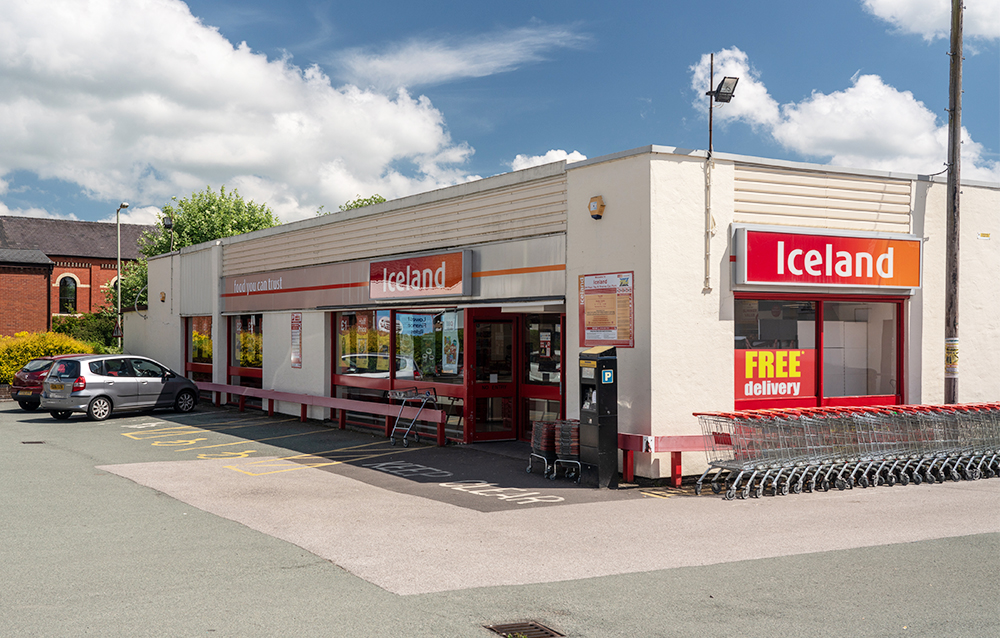 Click to EnlargeIceland published its own plastic footprint, amounting to over 32,000 metric tons across its UK and international operations in 2019.

Pacts and pledges “have never gone far enough”
The F&B industry abounds with companies committing to plastic reductions and recyclability targets. According to Bosworth, the public may be led to believe that “the problem is getting solved.”

“The only purpose [these pledges] has ever served is to pull the wool over our eyes and let some of our biggest polluters convince us they’re being proactive in tackling plastic pollution,” adds Sutherland.

“Recycling, which too often forms the basis of these pacts, is continuously touted as the solution the world so desperately needs, but how much plastic have we ever recycled? Between 5 and 10 percent. The real figures don’t lie.”

A report from Greenpeace and the Environmental Investigation Agency (EIA) last December revealed that the plastic packaging sold by major UK supermarkets rose to more than 900,000 metric tons annually. Seven of the top ten supermarkets had actually increased their plastic footprint.

Government steps in
As a key driver in the transition to more environmentally sustainable packaging, Iceland and NGOs are calling for mandatory governmental measures to sharpen traceability reporting.

“Of course, any reduction in needless plastic is welcome, but to ensure every firm takes this issue seriously we need legislation. That’s why we want the Environment Bill – currently passing through the UK Parliament – to include legally-binding targets for cutting plastic waste and pollution,” says Bosworth of Friends of the Earth.

The UK government has proposed a £200 (US$263) per ton tax rate for plastic packaging with less than 30 percent recycled content that will take effect from April 2022. It also announced plans to extend the single-use carrier bag charge to all retailers and increase the levy to £0.10 (US$0.13) as of April 2021.

13 Apr 2021 --- Avery Dennison has partnered with The Future Laboratory consultancy on a zero-waste roadmap. The report provides brands and retailers with a strategic framework for... Read More

29 Mar 2021 --- Key players in the plastics industry are coming together to voice concerns over the impending Break Free from Plastic Pollution (BFFPP) Act in the US, which they... Read More

03 Mar 2021 --- US supermarkets are deprioritizing environmental sustainability during the COVID-19 pandemic after “falling prey to plastics industry propaganda,”... Read More