You are in : All News > “It’s been too profitable for the UK waste industry to offload waste to China,” says Hubbub Founder

“It’s been too profitable for the UK waste industry to offload waste to China,” says Hubbub Founder

15 Feb 2019 --- Ahead of Packaging Innovations 2019 in Birmingham this month, PackagingInsights speaks to Trewin Restorick, Founder & CEO of environmental sustainability charity Hubbub, about UK sustainability levels and the issue of plastic packaging pollution. Hubbub collaborates with leading companies like Waitrose, Starbucks and Coca-Cola to create environmental campaigns and measure the efficacy of sustainability initiatives. Here, Restorick discusses the shortfalls of UK recycling, the demonization of plastics packaging and strategies to increase the popularity of reusable coffee cups.

PackagingInsights: What are Hubbub’s main aims and ambitions?
Restorick: Hubbub was founded four years ago with the aim of taking environmental messages to a mainstream audience. It was driven by two things: firstly, the science around environmental issues, specifically plastic pollution and climate change, was becoming increasingly worrying and I thought there was a real need to act quickly to act on that. Secondly, I felt that the other charities campaigning in this space are all very “doom and gloom,” sometimes preachy, or targeting an already very “dark green” audience. I wanted to promote our environmental message in a more optimistic way.

PackagingInsights: How highly do you rank the issue of packaging pollution, and particularly plastic packaging pollution, in the overall UK sustainability picture?
Restorick: When Hubbub was founded four years ago, it wasn’t actually that high on the agenda – there was more concern around climate change. Around two years ago, concern about plastic pollution started to feature on the agenda. It was initially centered on the 5p plastic bag charge, then coffee cups, then plastic bottles, then straws. What we’ve seen, particularly through programs like Blue Planet, is a massive transformation in the public consciousness. If you talk to the UK public now, it’s almost become the number one environmental topic.

PackagingInsights: There are some organizations, such as A Plastic Planet, that would like to see a complete eradication of plastics in food and beverage packaging. What is your stance and do you think plastics packaging has a role in a more sustainable future?
Restorick: Yes I do. I think there’s been a real knee jerk reaction against plastics. The reason plastic is so ubiquitous is because it has many fantastic qualities as packaging material – it’s light, keeps food fresher for longer and is easy to transport. Obviously, its very durability means that, when it escapes into the natural environment, it becomes very problematic. We certainly need to phase out certain types of plastic because it is just excessive. We also need to look more at reduction and reuse for drinks containers like coffee cups, but crucially, we need to make sure that the recycling part of the process works, that Click to EnlargeHubbub UK Founder & CEO, Trewin Restorickplastics aren’t shipped all around the world, that there are better packaging facilities in localities and that we create a truly closed loop economy for it.

PackagingInsights: Some research suggests that plastic is actually the most net environmentally friendly material that we can use for packaging in terms of energy use, water consumption, greenhouse gas emissions, and so on. Do you think there is a danger that the environmental benefits of plastics could be lost in the tide of anti-plastic sentiment?
Restorick: Yes, I think the public has become obsessed with the end of the production line without thinking about the full carbon impact. The fact that people are moving away from plastic bottles to aluminum cans to store water just seems absolutely crazy to me when you consider the impact of mining and the amount of energy used to create the aluminum – so yes, I do think there has been a knee jerk reaction which sometimes leads to poorer environmental outcomes.

PackagingInsights: This week, UK Think Tank Policy Connect released a report which suggested that the UK is well behind other European countries in terms of its recycling rates and infrastructure. Why do you think the UK has fallen behind and what can it do to get up to speed?
Restorick: I think that to date it has been more profitable for the UK waste industry to stick waste on boats and ship it to China and other countries and we have basically exported our problem. There’s been a financial incentive for the waste industry to do that. Now that the Chinese have started to restrict waste imports and there are more stories about UK waste going overseas and not actually ending up being recycled, the chickens have come home to roost. It is a problem that could get even worse should we have a no-deal Brexit. We really do not have adequate recycling infrastructure in the UK, so the government needs to provide more financial incentive to ensure waste is recycled domestically. I also think we have been very lax in looking at the quality of the recycling we collect – again, the UK lags very far behind other European countries in terms of collecting quality recycling material that can be of use to the industry.

PackagingInsights: Do you think that the main obstacle to better recycling rates in the UK is a lack of government regulation, or are there other factors at play? 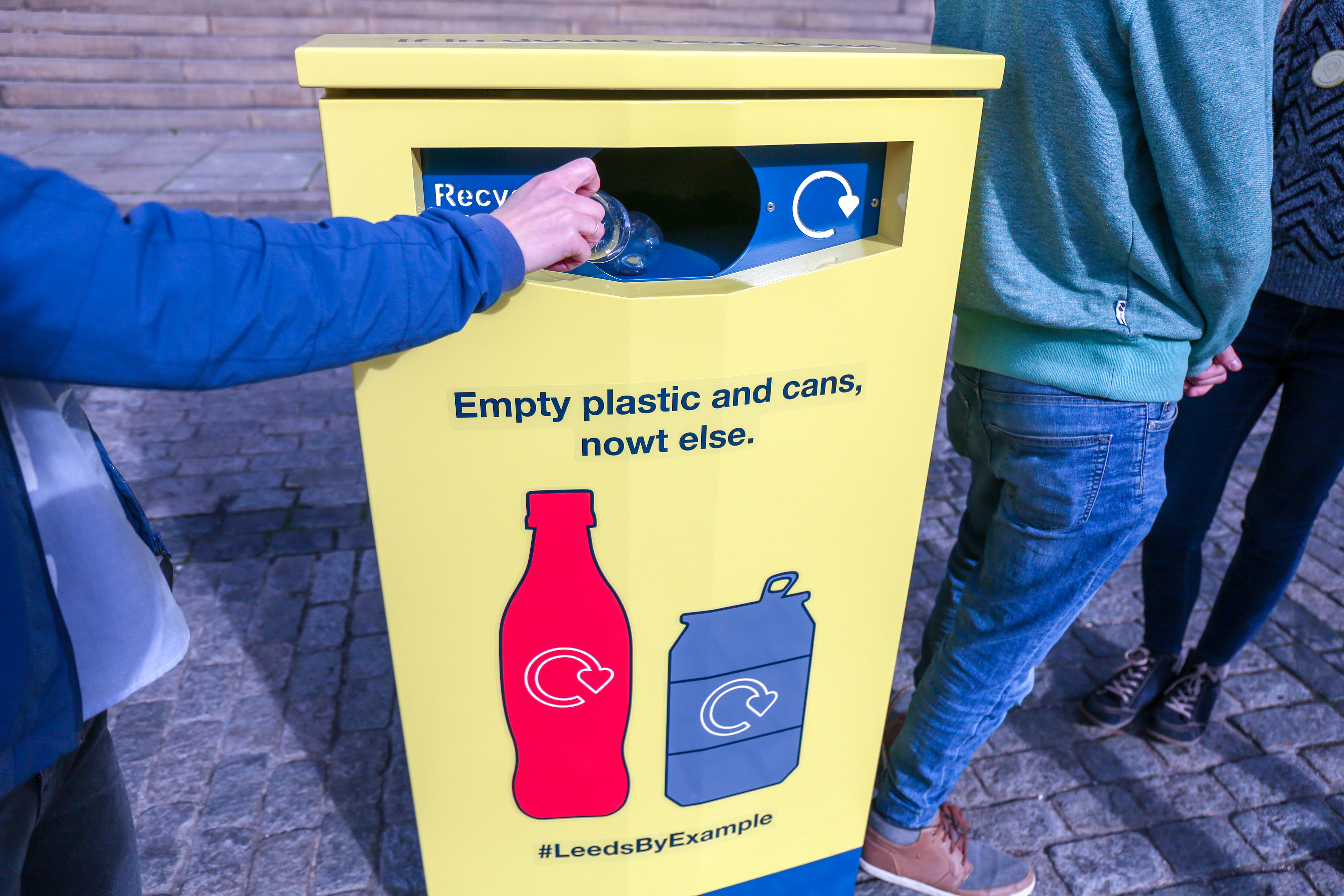 Click to EnlargeHubbub are currently trialing different approaches to recycling in the city of Leeds.
Restorick: It’s a massively complicated mixture of factors. Firstly, the financial incentives have to shift to achieve more recycling within the UK. There’s a need for much more consistency in collective rounds and communications because, at the moment, you can go from one local authority area to another and find a completely different recycling system which massively confuses the public. But the industry needs to do more also – it needs to look at creating packaging which is simpler in many ways and uses fewer types of polymers so that it is easier to recycle. The industry also needs to cut down on excessive packaging. The public needs to do its bit as well, but at the moment I’m not surprised that the public is not reacting because the messaging is very confusing and there’s certainly no strong overall narrative to follow.

PackagingInsights: What can you tell me about your collaboration with Waitrose on the “Plan Plastic” initiative? What is Hubbub’s role in the project?
Restorick: Waitrose has set aside £1 million (US$1.28 million) from the plastic bag 5p charge. It was very keen to use that million to create five or six new approaches to reducing plastic pollution across a range of target areas, from behavioral change to production and circular economy. Our role in the partnership is twofold: firstly, to help them get the message out to the experts and organizations that are capable of coming up with some great ideas. We’ve been very proactive in promoting the information and actively approaching organizations that we think have strong ideas in this space. Secondly, once the winners are selected by an independent panel, our role will then be to provide those winning entrants direct support, but also to create a thorough impact assessment of what is being achieved through the activities they are undertaking.

PackagingInsights: What can you tell us about your Starbucks’ coffee cup trial? What lasting impact has it had?
Restorick: We initially conducted a trial starting February last year in 36 London Starbucks stores, where it imposed a 5p charge on disposable cups to see what the impact of that was. It significantly shifted the number of customers who used reusable cups and had more of an impact, strangely, than the 25p discount did, although Starbucks did still offer that as well. When Starbucks extended the charge to all 930 stores last July, it shifted the reusable cup rate from about 2.5 Click to EnlargeHubbub's Leeds project is funded by 26 leading FMCGs, including Coca-Cola, Pepsi and Danone.percent to 5 percent. The proceeds from the 5p charges were given to Hubbub. We are currently two weeks ahead of what we can say publicly, but over the next few months, you will see some really significant announcements of how we are going to use that donation to promote reuse models and recycling.

PackagingInsights: What tips would you have for individuals looking to improve their recycling behavior?
Restorick: I would say make sure you follow the waste hierarchy, reduce pointless consumption, reuse whenever you can, but do not buy a reusable coffee cup and use it only once, because that is even worse for the environment than using a disposable. Of course, recycle, but recycle in line with the requirements of your local area. Don’t do any “wishful recycling” – that only causes more contamination.

PackagingInsights: You will be present at the Packaging Innovations show in Birmingham later this month. What will you be trying to achieve?
Restorick: We will be talking about how the packaging industry can use “nudge” behavior change techniques to encourage people to do the right thing. For example, we’ve been doing a trial in Leeds supported by 26 major companies like Coca-Cola, Pepsi, Danone and some retailers like Asda, Morrisons, M&S, Co-op and the coffee cup companies. They’ve all contributed £10,000 (US$12,810) each, so a total of £260,000 (US$333,000) to help test lots of different approaches to promoting recycling on the high-street. We’ve done things like testing the impact of recycling reward machines, different forms of communication using apps and new types of infrastructure. The results are starting to come in and they are being independently measured so that we can determine which things seem to be working and which things seem to be less successful.