You are in : All News > KHS expands Nature MultiPack capacity to 108,000 cans per hour, equips Coca-Cola with second turnkey line 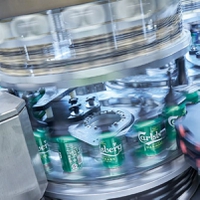 04 Mar 2021 --- KHS has accelerated the filling rate of its Innopack Nature MultiPack machine from 45,000 to 90,000 beverage containers per hour at normal capacity.

High-performance cans are usually filled at a rate of over 100,000 containers per hour, meaning the Nature MultiPack update can now compete with high-capacity industry standards.

In a separate move, KHS has supplied Coca-Cola European Partners (CCEP) with its second Innofill Can DVD can filler at the beverage giant’s facility in Wakefield, UK.

After the first turnkey canning line –called Line 4 – was installed and demonstrated its efficiency, the bottler then commissioned KHS to supply its sibling Line 5 within one year.

“The aim of our investment was of course to boost capacity,” says Michail Skarpathiotakis, senior project manager at CCEP’s headquarters outside London.

The main focus is on cardboard multipacks holding between four and 30 containers. With the COVID-19 crisis confining consumers to their homes, this type of pack is currently experiencing a “growth in sales that runs into two figures.” 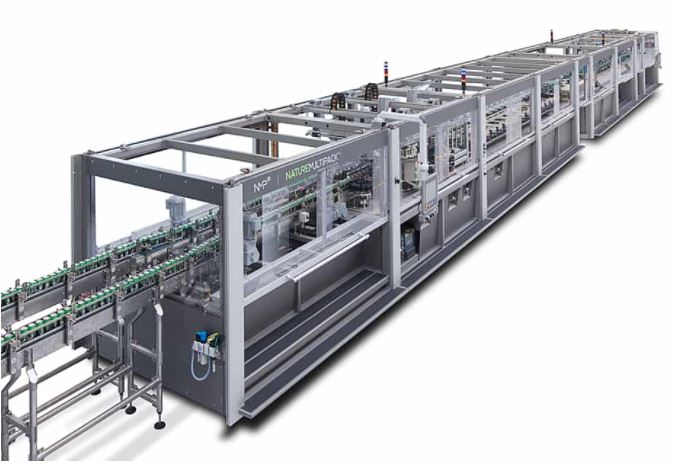 Click to EnlargeThe Innopack Nature MultiPack machine has an output of up to 108,000 cans or PET bottles per hour.

What began as a PET bottling line has now also evolved into a canning filler due to growing interest in the eco-friendly adhesives.

The resulting “snap packs” are created together with Carlsberg Group and the machine has now been introduced in several European countries as packs of four, six and eight cans.

The machine’s initial design of producing 45,000 bottles per hour plus 20 percent overcapacity was “too slow.” However, Nature MultiPack can now process a maximum of 90,000 containers every 60 minutes at nominal capacity, increased to 108,000 cans at overcapacity.

Depending on the format, the machine outputs up to 450 packs of four, 300 packs of six or a maximum of 225 packs of eight containers per minute.

Overcoming technical challenges
Placing two machines on one line at Carlsberg was only a temporary solution, says KHS. Not only was the footprint twice the size (one machine is almost 25 m long), but there was also a doubled investment cost.

A series of technical changes made the performance boost possible. KHS increased the conveying speed from 51 to 72 m per second compared to the machine’s predecessor.

“The pitch was decreased on the unscrambler module so that we didn’t have to double the speed, which would have incurred a considerable amount of extra effort,” explains Dr. Matthias Caninenberg, head of Nature MultiPack Technology.

The change reduces the distance between the containers from 114.3 to 90 mm and even down to 80 mm following the gluing process. “This allows more units to run through the machine and we get the performance we want,” Dr. Caninenberg continues.

“Too many” changeovers
CCEP says it aims to keep its stock down to the minimum owing to its vast product portfolio.

“This says less about the time needed for product switches but rather indicates there are a great number of these,” KHS details. 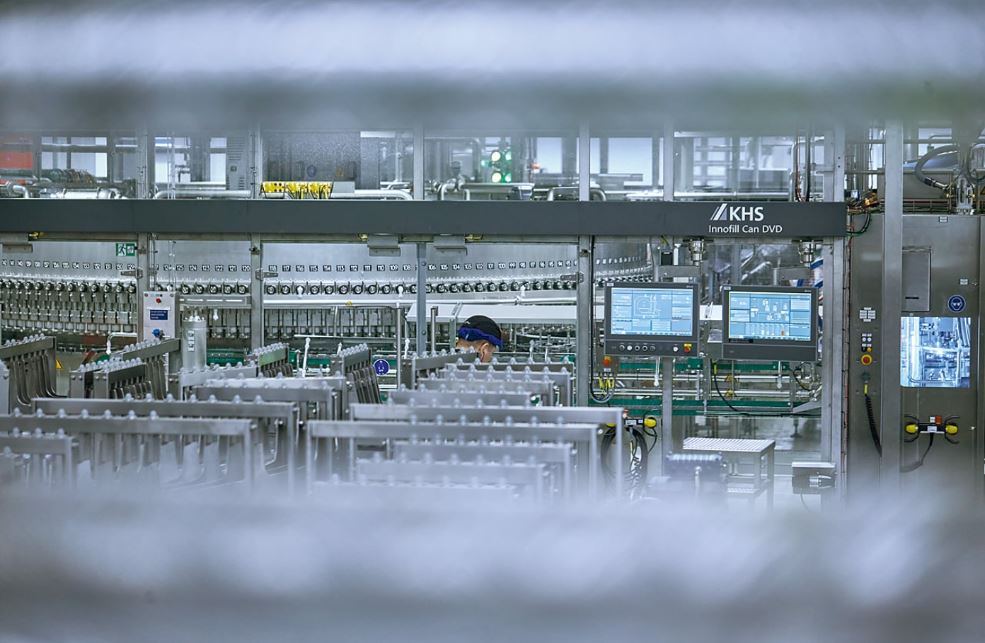 Click to EnlargeTwo KHS Innofill Can DVD can fillers have been installed at CCEP in Wakefield within a single year.When asked how many there are in practice, Wakefield’s operations manager Kerry Morgan-Smith replies: “Too many.”

However, in view of the increasingly individual demands of consumers, this is the only right way to go about things, she continues.

Quick machine installation for can-curious Brits
Installation started a week after the UK had gone into total lockdown. The difficult circumstances proved a huge technical challenge for the project.

“Together with KHS, we managed to install two lines within the space of just twelve months,” says Morgan-Smith. “We’d never done this before – at least three to four years usually elapse between projects like these.”

The beverage can enjoys an above-average popularity in the UK. In Germany, PET bottles have an 81 percent share of the CCEP packaging mix and cans a mere 5 percent.

However, that ratio changes to 46 and 35 percent, respectively, in the UK. This makes British consumers Europe’s top can users.

Wakefield facility
Wakefield is home to the largest soft drinks factory in Europe. Here, at one of five production sites in the UK, CCEP fills up to 10,000 cans and 1,800 PET bottles of soft drinks per minute – 24 hours a day, seven days a week.

This amounts to 45 percent of the total volume CCEP produces in the UK: expressed in absolute figures, that’s 176 million sales units or a billion liters of finished product a year.

In the Coca-Cola system, a sales unit consists of twenty-four 8-fl.oz. bottles, the equivalent of 5.678 L.

05 Feb 2021 --- The KHS Group is expanding its reach in Africa by teaming up with Nigeria-based Big Bottling Company (BBC). The collaboration is aiming to enhance PET production... Read More

18 Jan 2021 --- Crown has activated renewable power across all its US and Canadian beverage can plants in what the supplier describes as an industry... Read More