You are in : All News > Microplastics and health: We must avoid “wait and see” approach, warns lead researcher

Microplastics and health: We must avoid “wait and see” approach, warns lead researcher

14 Jan 2019 --- Research focused on understanding the effects of microplastics has intensified after a series of discoveries found that the tiny plastic particles are polluting marine environments, food supplies and our bodies. Dr. Natalia Ivleva, a researcher at the Technical University of Munich (TUM), has developed new analytical methods for the identification and quantification of microplastic and recently shared her findings.

“It's not yet totally clear just how dangerous microplastics are for living organisms. What is known is that aquatic organisms and other species, including humans, can absorb microplastic particles. But that alone doesn't prove toxicity. However, we have also ascertained that smaller-sized particles might have the ability to be absorbed in certain types of body tissue in aquatic organisms,” she says.

It is estimated that humans produce around 400 million tons of plastic worldwide each year. A significant proportion of this plastic ends up in the environment as litter, and most types of plastic take several hundred years to completely degrade.

Last year, The World Health Organization (WHO) launched an investigation into the potential human health risks of microplastics after plastic particles were found in the water products of 11 leading brands. 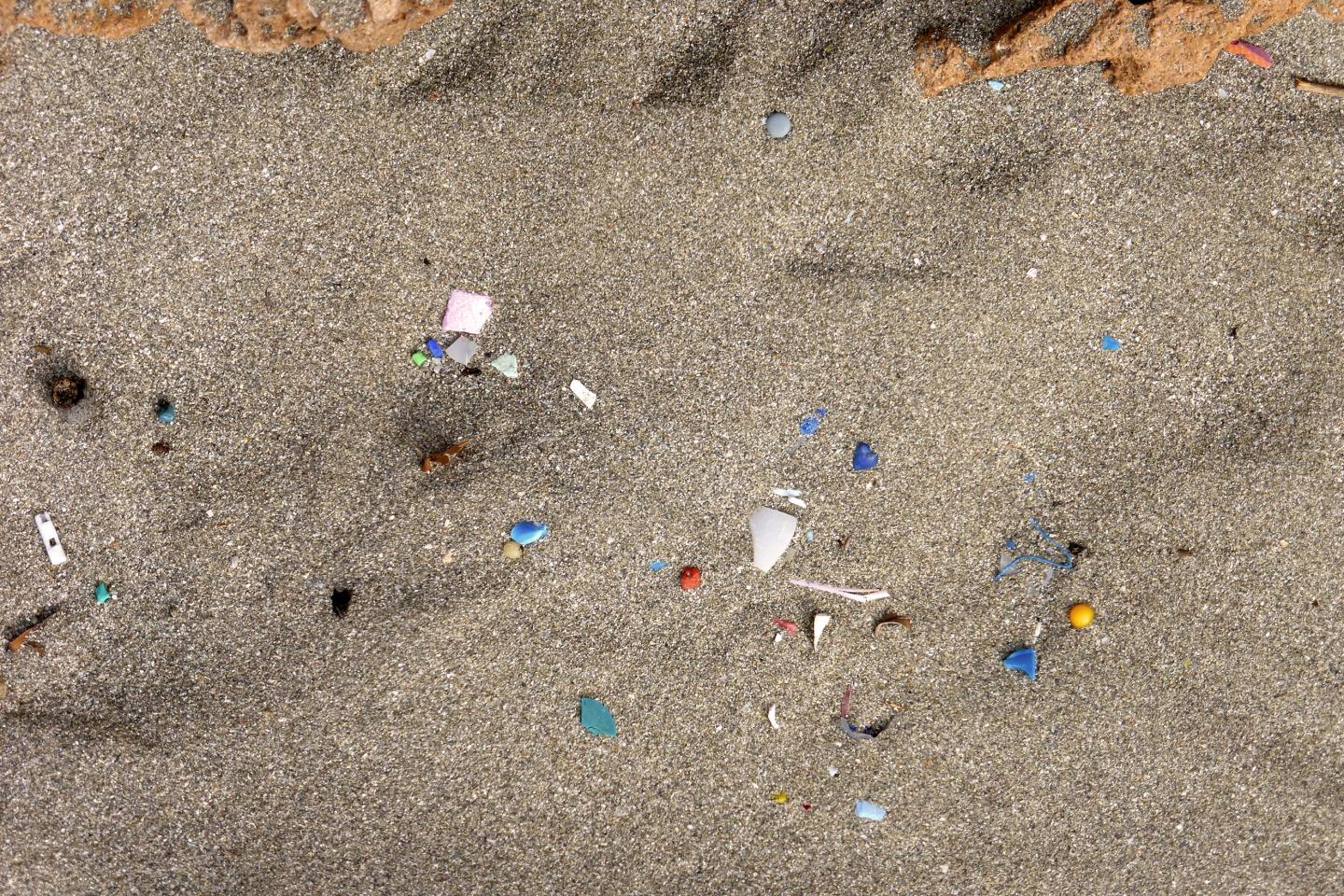 Click to EnlargePlastic particles on a beach at Mallorca, Spain.In September 2018, University of Exeter researchers warned that record high levels of microplastics had been found deep in the sand where sea turtles lay their eggs in the Mediterranean region.

“Over the next few decades, we will probably be facing a massive increase in the amount of microplastic pollution in the environment,” says Ivleva. “We all know that even inert and non-toxic substances can have unforeseen effects once they reach a certain level of concentration in the environment.”

According to current definitions, microplastic is any piece of plastic measuring five millimeters in size down to one micrometer. Plastic particles that are smaller – from one micrometer down to 100 nanometers – are defined as sub-microplastic. Particles below 100nm are called nanoplastic, explains Ivleva. Studies show that most of the plastic particles possess sizes in the lower micrometer range.

“Both microplastics and nanoplastics are usually formed by the breakdown of larger pieces of plastic, for example, from shopping bags to the wear and tear on a car's tires or when we wash an article of microfiber clothing. Since some manufacturers are still adding microplastics to personal care products like toothpaste and scrubs, they are a source of microplastic pollution, too,” adds Ivleva.

Why don’t scientists know more?
The lack of scientific understanding about this topic remains an area of debate. Ivleva explains that, early on, when researchers first realized that microplastic was entering the environment as a result of human activity, optical methods were used to distinguish plastic from other particles in a given sample.

“Unfortunately, this method is not very reliable. When you are looking at a particle that is smaller than a millimeter in size, it's difficult to discern whether it is a grain of sand or a piece of plastic. They look very similar at that size,” Ivleva says.

One good example she highlights is the research project "MiWa," funded by the German Federal Ministry of Education and Research (BMBF). Ivleva was part of a team that conducted a chemical analysis of around 3,000 particles from a water sample taken from the Elbe River.

“We ascertained that only one in a thousand particles in the sample was actually plastic. Alongside limestone and other mineral particles, the water sample also contained a lot of organic material. That is why it's of the utmost importance to develop reliable and standardized analysis methods – otherwise, there is no way to accurately compare different sample values with one another,” Ivleva explains.

“I want to emphasize here that we're talking about extremely low concentrations of microplastics in the samples we have analyzed, which we would expect would have a correspondingly small effect on the health of a living organism. In some experiments testing for high concentrations of microplastic, negative effects have been measured, while in others, no negative effects have been found.”

“This research is still very much in its infancy, which doesn't mean that we should take a ‘wait and see’ approach,” stresses Ivleva. “If we consider the slow rate at which plastic degrades, it is an urgent priority for us to find strategies for reducing the amount of plastic waste we're producing in the first place,” she adds. 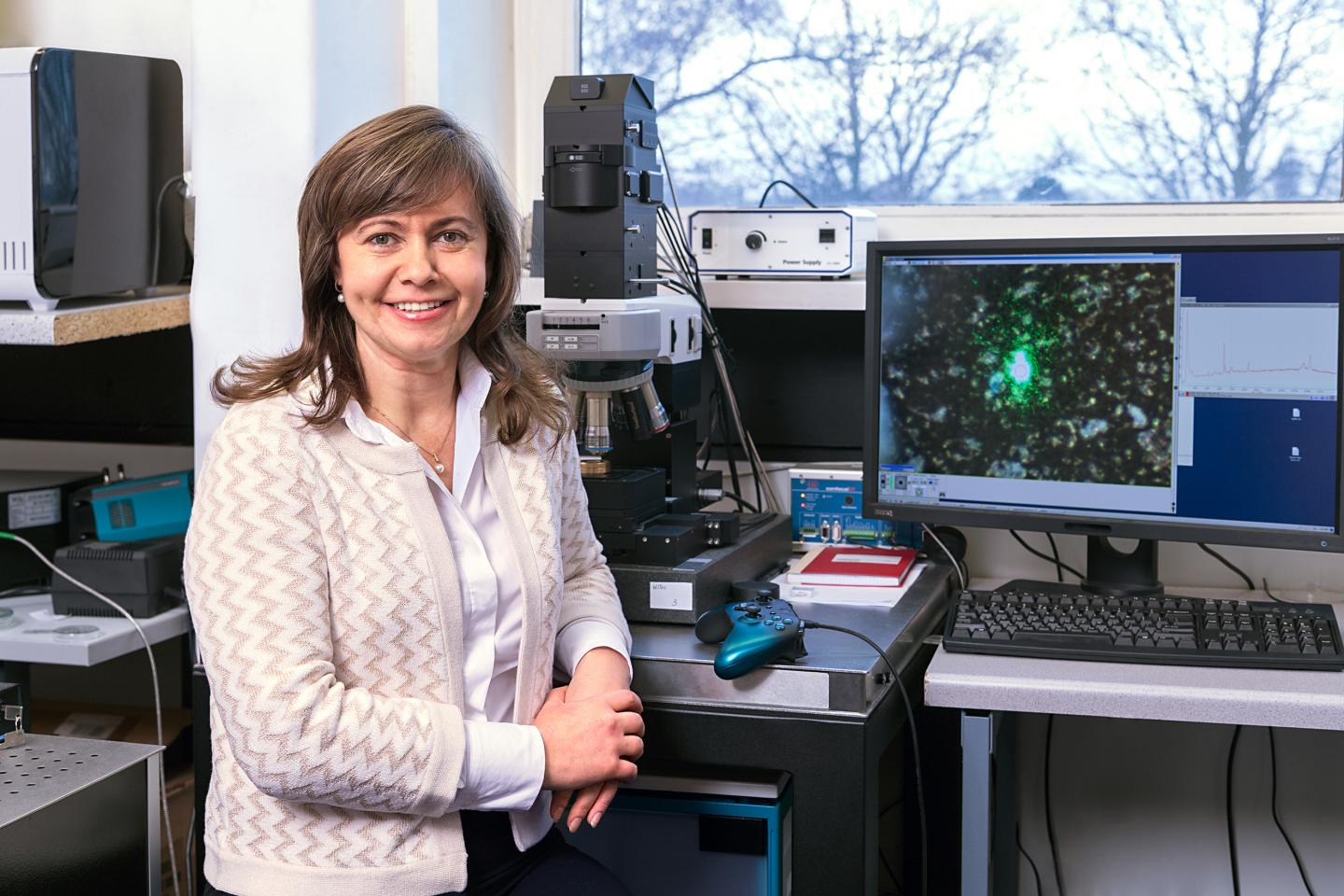 Click to EnlargeDr. Natalia Ivleva, a group leader at the Institute for Hydrochemistry (IWC) at the Technical University of Munich (TUM), has developed new analytical methods based on Raman microscopy for the identification and quantification of microplastic.
Several different methods currently being employed to analyze samples for microplastics, depending on the questions being asked.

“For example, thermal analysis paired with gas chromatography and mass spectrometry is employed to determine the quantity and types of plastic particles and additives that might be present, but these methods cannot be used to determine particle sizes,” Ivleva explains.

“Spectroscopic methods can be used to determine both the chemical fingerprint as well as the size and shape of microplastic particles. And infrared micro-spectroscopy can even be used to automatically analyze particles down to the size of 20 micrometers,” she adds.

The TUM Institute of Hydrochemistry predominantly employs Raman microscopic analysis in their research. “Raman is a non-destructive spectroscopic method that makes it possible to conduct both a signature spectrum analysis as well as facilitate reliable particle identification. Using this method, we can determine whether a particle is made of synthetic polymers – or if it's a natural substance such as cellulose or quartz,” she adds.

Ivleva goes on to explain that this method allows researchers to precisely determine the type of plastic in a sample. By coupling the power of a Raman spectrometer with a regular optical microscope, she is able analyze particles down to one micrometer or even smaller.

“The result is that we have the ability to clearly define the number of particles, the range of particle sizes and the polymer types of the microplastics in any given sample,” Ivleva says.

“We have been able to confirm the presence of microplastic particles in the digestive tracts of water fleas. Furthermore, in a project funded by the Bavarian State Ministry of Environment and Consumer Protection, we have found that mussels ingest especially small microplastic particles,” she notes.

Microplastic research: The next steps
Ivleva believes that to develop representative and statistically reliable conclusions about the level of microplastic contamination in any given sample, researchers need to analyze a lot of particles per sample. 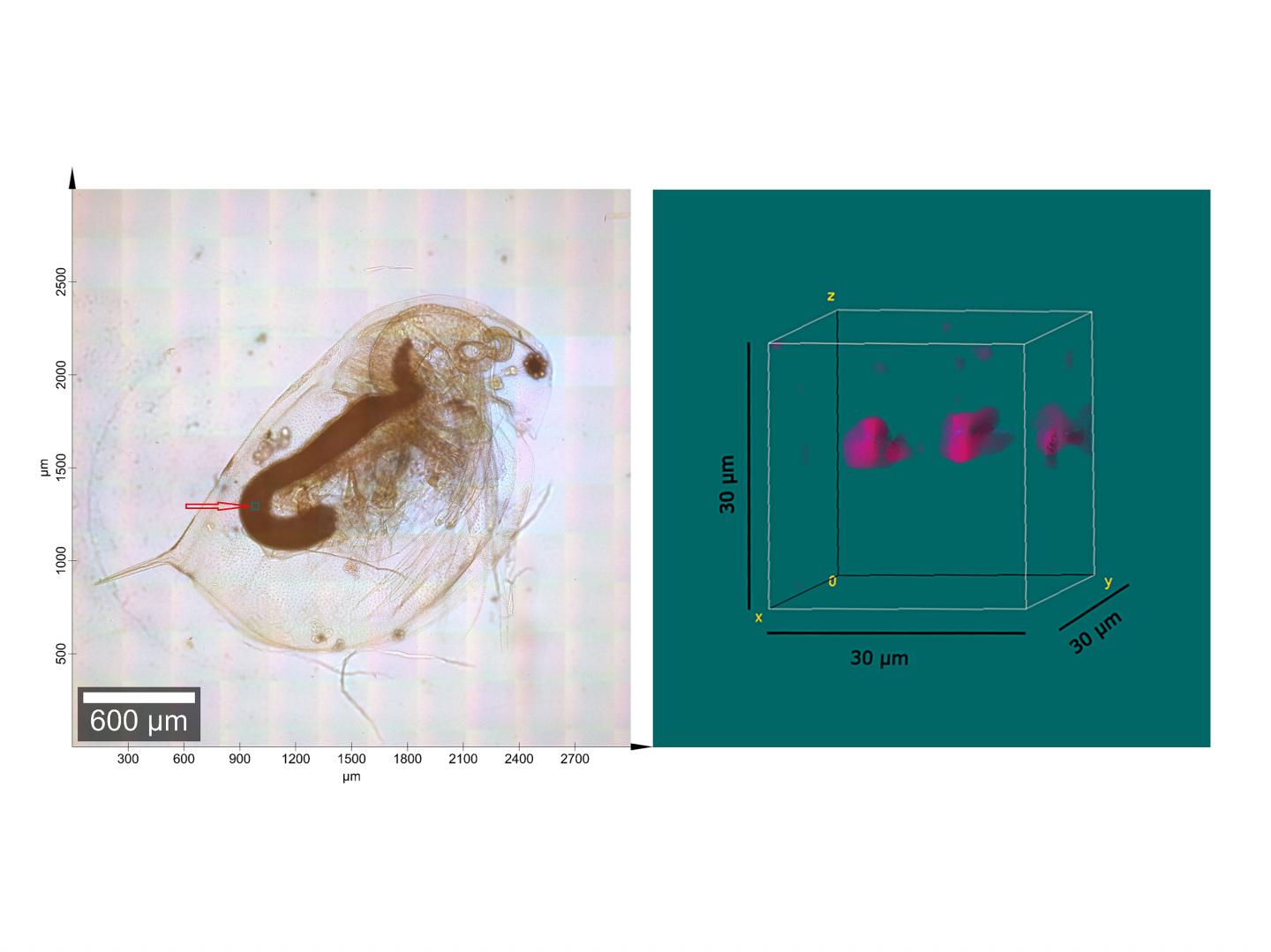 Click to EnlargeMicroscopic image of a water flea (Daphnia magna) and Raman microscopic analysis of a segment (green frame in the left image) in the intestine of the animal. The magenta colored areas in the right image show PVC particles swallowed by the animal. “That is why we are also currently working on the automation of Raman-based methods in the project ‘MiPAq,’ which is being funded by the Bavarian Research Foundation (BFS),” Ivleva says.

As plastic particles degrade to ever-smaller sizes in the environment, they present an increasingly higher potential for environmental toxicity. That is why Ivleva’s institute is collaborating with other TUM chairs to develop more accurate methods for analyzing very small particles within the BMBF-funded “SubμTrack” project.

“First, we'll need to collect enough comparable sample results, using standardized analysis methods, which will show us just how much microplastic or nanoplastic is actually present in any given sample,” she says. “Only then we can begin to analyze the negative effects that might be caused by a certain level of microplastic or nanoplastic contamination in the environment, or in humans and other species.”

“It will also be necessary for researchers to determine which types, particle sizes and shapes – and especially which concentrations of microplastics and nanoplastics have which toxic effects,” she adds.

Should plastics be banned? “Absolutely not,” notes Ivleva. “Plastic is an incredibly versatile material and has a lot of advantages over other materials.”

“That said, it is of paramount importance for us to drastically reduce the amount of plastic we are introducing into the environment. And it's not just the companies manufacturing plastic that need to shoulder the sole responsibility and burden for this – it is also up to us as consumers to become more responsible in how we use, reuse, recycle and dispose of plastic in the future,” she concludes.

12 Jan 2021 --- Symphony Environmental Technologies (Symphony) is suing the EU for damages relating to the ban imposed through Article 5 of the Single Use Plastics Directive (SUPD)... Read More

08 Jan 2021 --- Mexico City has kicked off the new year with a ban on certain single-use plastic packaging, following a year-long preparation. Since January 1, 2021, the... Read More