You are in : All News > Nestlé UK switches to biodegradable security seals for transport fleet 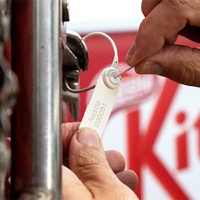 The Mega Fortris seal is a biodegradable plastic that can be biologically broken down after use, but still offers the same properties required as an important security tool for logistics teams.

Security seals are a crucial tool for the logistics team to help prevent breaches of lorries and to indicate when a load might have been tampered with. Every load that departs from Nestlé typically uses a plastic seal, which quickly adds up to more than 200,000 seals being discarded every single year.

The decision to move to biodegradable seals came from an exercise run by the Nestlé team to find opportunities to reduce waste and improve the sustainability of Nestlé’s logistics operation.

“Everybody at Nestlé is increasingly conscious of how we use plastic and these seals, which are simply thrown away once used, were an obvious and very visible single use of plastic in our area,” says Richard Hastings, Head of Logistics for Nestlé UK & Ireland.

“We set about looking for a better option and that’s when we got in touch with Mega Fortris. We will now switch to the new biodegradable seal for all of our loads to make a small but important change to the impact of our plastic waste,” he notes.

“Mega Fortris is aware of the impact plastic waste is having on our everyday lives, and is continually working on sustainability to the environment and are very pleased that Nestlé also recognizes the importance of this,” adds Keith Edgar, Managing Director of Mega Fortris (UK).

Nestlé is working to reduce its reliance on single-use plastics worldwide and has pledged to make all of its packaging recyclable or reusable by 2025.

This month, Natural mineral water brand Valvert launched its new bottle made entirely from recycled PET (rPET), a first for Nestlé in Europe. This innovation is a step further towards meeting Nestlé's commitment to increase the rPET content in its water bottles to 35 percent globally by 2025.

Last month, Nestlé formed a closed-loop recycling program with waste management specialist TerraCycle in the UK & Ireland for its confectionery flexible plastic packaging. Pouches, bags and wrappers from single bars, blocks and multipacks will now be accepted through the Confectionery Recycling Program, which takes the accumulated waste and turns it into new plastic items.

04 May 2020 --- Aseptic packaging provider SIG has teamed up with Nestlé, Logitech and other industry partners in a joint initiative to fund breakthrough research into more... Read More

10 Mar 2020 --- Ninety-eight of 100 surveyed UK government MPs agree that “compostable packaging alternatives can be part of the solution to the plastic crisis,” with... Read More

06 Mar 2020 --- Converting cornstarch into a new class of material called amylose inclusion complex (AIC) has given life to food-safe and mosquito-repellent packaging. This... Read More

25 Feb 2020 --- Compostable packaging products certified standard EN 13432 can disintegrate within a maximum of 22 days together with biowaste (GFT) in a full-scale industrial... Read More