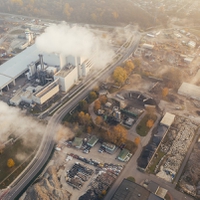 14 Oct 2022 --- Researchers at the City College of New York (CCNY), US, have found that advanced recycling (AR) technologies can produce enormously different environmental impacts, with some methods and projects reducing greenhouse gas (GHG) emissions by as much as 566%, while others can produce increases of 267%.

The study authors examined 13 life cycle analyses (LCA) on large-scale and commercially ready AR projects that use an array of methods, including pyrolysis, reforming and gasification. Also examined were sites using chemical depolymerization processes such as glycolysis, hydrolysis and methanolysis.

The report follows a build-up of industry investment and interest in AR as mechanical recycling infrastructure has largely failed to deal with the global plastic waste crisis.

While critics warn that AR can be highly energy intensive and could be used as a greenwashing mechanism through which corporations can avoid reducing single-use plastics, the CCNY researchers say AR “is poised to play a major role in achieving global sustainability goals.”

“It can transform hard-to-recycle plastics into a multitude of high-value feedstocks, reducing the need for fossil resources and limiting the environmental impact of waste management,” remarks Dr. Marco J. Castaldi, professor of chemical engineering and director of CCNY’s Earth Engineering Center.

The report is titled Quantitative Comparison of LCAs on the Current State of Advanced Recycling Technologies.

Cutting fossil fuels, cutting emissions
The report covered findings from 13 LCAs completed between 2020 and 2022. Each LCA had some unique non-overlapping elements, but all included assessments of the global warming potential for thermal and depolymerization recycling of post-use plastics.

Advanced methods can recycle plastic that is unfit for current waste streams.There were differences in scope, assumptions, functional units and system boundaries among the studies. However, a common trend across the LCAs was that GHG emissions could be reduced by implementing any of the AR technologies.

The review’s central findings were that AR can:

The conclusions are drawn from numerous unique comparison scenarios – the main ones being comparisons to landfill, waste-to-energy and fossil-based intermediates.

However, with the variety of technologies, inputs, outputs and conditions covered by the LCAs, one single value of CO2 eq emissions could not be ascribed to the overall impact of AR technologies, say the researchers.

Two LCA studies presented results with a large range between the minimum and maximum CO2 eq emissions reduction, ranging from 333% to 643%. There were also increases in emissions – in one case, 267% – but the researchers say that alternative implementation scenarios were available for every instance of increased emissions.

Given the findings, the CCNY authors state that the overall assessment of every LCA shows “at worst” mixed results. Experts dispute whether chemical recycling is an environmentally sustainable method of waste management.

ZWE used its findings to urge the European Commission to prioritize mechanical methods in its circular economy vision, branding pyrolysis “a very inefficient method” that should be used “as a last resort.”

However, other experts view AR as a range of methods that can complement international recycling infrastructure for materials unsuited to mechanical streams.

Bob Hall, an engineer at the American Society of Mechanical Engineers’ Research Committee on Energy (ASME), Environment and Waste, says that more research should be done and that study parameters must be harmonized to produce accurate findings.

“As these technologies mature, it is imperative to conduct additional studies on advanced recycling that adhere to international LCA standards,” he says.

The ASME also suggests that technologies with current operating performance data and a facility to visit should be prioritized for future analyses.

As the annual World Economic Forum (WEF) is underway in Davos, Switzerland, a report by impact organization Circle Economy and services company Deloitte is calling for a... Read More