You are in : All News > Sealpac and MatBørsen collaborate on click-on soup tray for shelf-life extension success 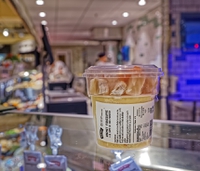 09 Jan 2019 --- Sealpac has collaborated with Norwegian company MatBørsen for its foray into the ready meal sector. The companies launched a click-on soup tray that has been stocked at Norwegian retailers Meny since 2017, for which MatBørsen invested in a line solution primary based on Sealpac equipment. The concept delivers an extension in shelf-life for the soup, as well as a convenient for on-the-go end product for the consumer.

In 2012, NorgesGruppen ASA took over the company, which allowed MatBørsen to invest around 130 million Norwegian Kroner in equipment, including the new line for the click-on soup tray.

“We are constantly developing ready meal concepts. In 2017, we introduced 60 new products at retail in a period of just two months. By doing so, we want our retail customers to be able to distinguish themselves from other retailers. Like we have done with the click-on soup tray that we are producing for Meny since 2017,” says Freddy André Henriksen, Controller of MatBørsen.

In Norway, Sealpac is represented by the company MPack AS, which has been a long-standing MatBørsen partner.

“MPack has always been important for us. They are not just selling equipment, but also continuously suggesting innovative packaging systems. Furthermore, MPack’s service technicians ensure excellent maintenance of the equipment and assist us in optimizing our line efficiency. They do that in close cooperation with our in-house service department,” says Henriksen.

The idea for the click-on soup tray was developed with Naber Plastics, a Dutch injection-molding company, who designed the two-part soup tray while Sealpac wClick to EnlargeSealpac and MatBørsen worked together, alongside other partners, to create the finished soup packaging.orked on the sealing and lidding technology. Prior to the development of  this concept, the soup was supplied in bulk to retail stores and served at request in individual portions to consumers. However, due to the limited shelf-life, any remaining soup in the bulk packs had to be thrown away just three days after opening.

“Sealpac, together with MPack, took up the challenge. During this project, our communication with them was direct and easy. As an example, we wanted the lid of the click-on tray to not be fully fixated, as it would have to be opened again at retail. Sealpac constructed the lidding system in such a way that the lid is clicked only partly without it coming off during transport or at retail,” notes Henriksen.

PackagingInsights spoke to Marcel Veenstra, of Sealpac, at last year’s Anuga Foodtec in Cologne on the packaging concept.

“The special part is that the soup is supplied to the supermarket with an empty top tray. In the store, the customer can decide which ingredients they would like to put into the soup. You scoop it into the tray, weigh it, click it and bring it to the cashier.”

The container also delivers on the convenience trend. “It is fresh and tailored to the customers’ needs. It is a mix and match, where you choose your ingredients and it is very convenient as you can heat it all in the microwave for just a few minutes,”

The ability for consumers to customize their meals to their particular tastes not only taps into the more nutritionally aware consumer, but could also provide a certain level of novel entertainment around snClick to EnlargeMoving to the new system has resulted in a shelf-life extension for the soup, as well as a reduction in plastic waste.ack time.

The final line
The new filling line starts with a Sealpac AS-LS1200 denester that places the soup trays onto the in-feed conveyor, after which they are transported to the Leonhardt filling system. This is done with Sealpac’s unique Walking Beam system, which guarantees the most accurate positioning of the trays underneath the filling heads. After filling the trays with soup, the Walking Beam ensures immaculate transport of the liquid product without spilling over the edge. The trays are securely sealed on a Sealpac A7 tray sealer with 5-impression tooling and transported to the lidding section. Here, the first Sealpac DA-M770 lidding system clicks an empty tray onto the sealed soup tray.

Shortly after that, the second DA-770 lidding system places a snap-on lid onto the empty click-on tray. Finally, the trays go through x-ray inspection (Elprom), are labeled from below and above (ELS), and placed in cardboard boxes by robots.

With the new line, the soup is now prepared in a tumbler, pumped into a cooling system and packaged at 4 to 6 degrees after approximately one hour. The soup is then sealed under modified atmosphere by adding CO² and reducing the residual oxygen level to below 0.4 percent. As such, it now has a shelf-life of up to 30 days.

“Overall, by moving from cold to hot filling and by applying new packaging formats, we have been able to significantly increase the shelf-life of our products while reducing plastic waste by up to 120 tons in 2018,” Henriksen concludes.

11 Mar 2020 --- Sealpac, a thermoforming technology specialist, will be showcasing several resource-saving solutions at interpack 2020. The trade show set to be held in Dusseldorf,... Read More

13 May 2019 --- Sealpac has launched its latest addition to the modified atmosphere packaging (MAP) market: the eTray. The new product is a cardboard tray with a plastic inlay that... Read More