You are in : All News > “A drop in the ocean”: The Circulate Initiative calls for city-level data in plastic pollution fight

“A drop in the ocean”: The Circulate Initiative calls for city-level data in plastic pollution fight

06 May 2022 --- A recent report by The Circulate Initiative shows that some of the major contributors to ocean plastic waste overflow are located in South and Southeast Asia, due to a lack of individual city data on waste management.

Plastic pollution, its severity and solutions has become a pressing issue of our time. Its consequences often become more transparent in poorer regions, which have less financial resources for recycling infrastructure and material alternatives.

The report highlights that without the data necessary to understand the plastic pollution rates of each city in the region, it is difficult to identify a suitable approach to remedy plastic pollution problems.

The Circulate Initiative argues that efforts to reducing plastic pollution – while making a “promising” start – are but “a drop in the ocean,” and similar efforts must be replicated on a larger scale with more cities so that we can understand local realities, set robust baselines, and provide increased and better quality data for all stakeholders to implement effective decisions.

Rivers feed flow of pollution
The report continues by highlighting the role rivers play with regard to worsening ocean plastics. It states that ten of the largest plastic emitting rivers in the world are situated near South and Southeast Asian cities.

These rivers are traversing cities on their journey to the ocean, collecting plastic leakage from the cities’ mismanaged waste along the way.

Implementation of more localized solutions based on an understanding of the gaps in a city’s waste management practices could help bolster efforts to tackle ocean plastic pollution, the report asserts.

National approaches
With plastic pollution continually worsening, governments of South and Southeast Asian countries have developed national-level roadmaps and policies to chart their country’s trajectory to a plastic-waste-free future.Reliable data is essential in laying a strong foundation to combating plastic pollution.

Reliable data is key
However, The Circulate Initiative conducted a review to identify the availability of plastic pollution data in India and Southeast Asian countries. The results demonstrate “major gaps in data availability” when it comes to plastic waste information including:

Reliable data is essential in laying a strong foundation to develop a coordinated and tailored approach to combating plastic pollution, the author underscores. 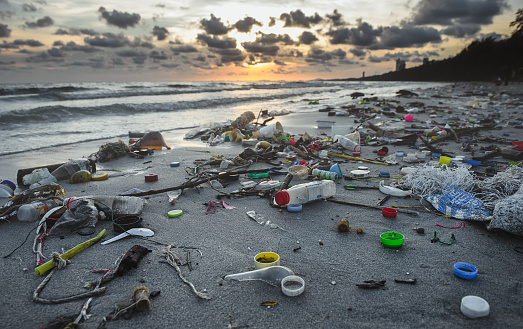 Enforced initiatives represent merely “a drop in the ocean,” with much more efforts needed.The report stresses that without the establishment of good quality baseline data, it will be challenging to put in place reasonable targets and deadlines, and implement effective strategies that can address the roots of pollution.

Proper and agreed-upon baselines facilitate coordination between governments at all levels, enabling them to work together to design policies that tackle plastic pollution from the grassroots up.

A drop in the ocean
Various efforts such as legislative protocols and initiatives have been undertaken to declare war on plastic pollution.

However, enforced initiatives represent merely “a drop in the ocean,” with much more efforts needed, including the collection of more city data on plastic pollution.

Plastic pollution has become one of, if not the most urgent man-made environmental issue of our time. Also across Western countries, including the UK and France, pacts and bans have been made to slash single-use plastics.

The Circulate Initiative has shown that these efforts are not enough with city-specific data needed to find locally adjustable solutions to a global problem.