You are in : All News > Alliance to End Plastic Waste refutes accusations of “sophisticated greenwashing” from think tank 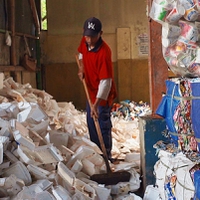 05 Sep 2022 --- The Alliance to End Plastic Waste (AEPW) has been labeled a “sophisticated greenwashing” scheme in a new report by financial think tank Planet Tracker. The report details an investigation into the corporate-led non-profit, which accuses members of hiding their activities and concealing conflicts of interest.

At the heart of Planet Tracker’s findings is that the AEPW consists of some of the biggest names in single-use plastic production globally, including ExxonMobil, Dow, BASF and Shell.

This conglomerate of oil and chemical corporations is largely made up of American Chemistry Council (ACC) members, which lobbied against establishing the Global Plastic Pollution Treaty. According to the report, its members collectively produce a significant proportion of the world’s plastic waste, yet the AEPW has achieved relatively little in reducing waste.

Speaking to PackagingInsights, an AEPW spokesperson disputes the report’s findings. “We are not able to comment on member companies’ specific activities with the ACC. The report contains a number of factual inaccuracies, especially the unsubstantiated, third-party data at its heart, which has caused them to reach a variety of incorrect conclusions.”

The report accuses AEPW of helping some of the biggest plastic producers in the world greenwash their activities.“Ending plastic waste is a complex challenge and requires action on multiple fronts by industry, governments, investors, civil society, and communities. There is no single solution; neither is there a one-size-fits-all answer.”

AEPW’s defense
The AEPW says it has developed a portfolio of 50 projects of various sizes, in different stages of implementation, across 30 countries.

“In line with our focus, about 60% of our portfolio comprises integrated infrastructure projects. They also include behavioral change programs,” says the spokesperson.

“Despite initial delays caused by the global pandemic, we have made notable progress this year and are on track to divert and recycle more than five times more plastic waste compared to previous years’ volumes of 4,000 tons.”

However, Planet Tracker has found that the ten top 100 single-use plastic producers that are also members of the AEPW generated an estimated 32 Mt of waste in 2019. On an annual basis, these ten companies contribute 9% in the total plastic waste generated globally while the whole AEPW removes 0.00037%.

Greencrowding accusations
Planet Tracker says that ultimately the AEPW’s lack of real action is due to the fact it operates as “a sophisticated form of greenwashing – in this instance ‘greencrowding.’” This term means hiding in the group and moving at the speed of the slowest adopter.

Various failed projects, including the fall of the AEPW’s flagship project last year, have led investigators to question the true motives of the non-profit, especially given the immense pool of resources at its disposal.

However, the group offers hazy reports on its progress. “We are working to integrate greater transparency into our reporting framework and are developing a set of certifiable impact metrics to better track and measure the outcomes of our portfolio,” says the spokesperson.

AEPW also says the accusations that its members attempted to derail the Global Plastic Pollution Treaty are not fair.

“We reiterate that we are committed to supporting the successful implementation of the concluded treaty, which we demonstrated in an intervention delivered at the UN Environment Assembly 5.2.”

A study reveals that the majority of “home compostable plastics” in the UK are ineffective and mislabeled, causing them to end up in landfills. According to... Read More

The Eurofins Assurance network of companies has launched a Zero Waste to Landfill Certification Service for industries to leverage and assure consumers who demand... Read More

The majority of European food companies that pledge to improve their use of plastic packaging either fail to do so or never report on their pledges again, according to... Read More