You are in : All News > Danish start-up launches plant-based spoon with integrated teabag, as drink-to-go-market rethinks its waste problem

The Sprout Spoon consists of virgin fibers which are waterproof, but not coated in plastic 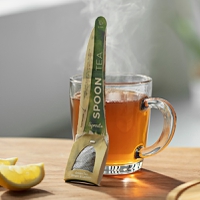 24 May 2019 --- Denmark-based Sprout has introduced a new patented and eco-friendly spoon for the “drink-to-go-market” as the pressure to phase out single-use cutlery heats up. Coined the Sprout Spoon, the 100 percent biodegradable, foldable spoon has a teabag integrated into its form, meaning tea can be stirred sans plastic cutlery or stirrers. It can be thrown directly in the biodegradable trash as it decomposes and is free from toxins. The spoon is also touted as not only being relevant for hotels, airlines, gas stations and restaurants; but also as an ideal company giveaway because the spoon can be personalized with logo and messages.

“The Sprout Spoon represents a solution to one of the great plastic challenges that the world faces today. Especially the ‘drink-to-go-market’ needs to rethink its waste problem. In the US alone, 100 million plastic spoons and other plastic utensils are used and thrown out every day. They can take up to 1,000 years to decompose. In Europe, the problem has such importance that the EU has decided to ban plastic utensils by 2021,” says Founder and Chairman of Sprout, Michael Stausholm.

According to the UK’s Tea and Infusions Association, people consume 60.2 billion cups of tea per year and 96 percent of tea drinkers choose tea bags rather than tea leaves.

This week, the Council of the EU officially adopted measures proposed by the European Commission to tackle marine litter by banning the 10 single-use products most commonly found on European beaches. This includes cotton bud sticks, cutlery, plates, straws and stirrers and also incorporates abandoned fishing gear and oxo-degradable plastics. The Member States will now have two years to transpose the legislation into their national law.

The Sprout Spoon consists of virgin fibers which are waterproof, but not coated in plastic.

Click to EnlargeThe spoons also holds potential for the promotional gift industry, notes Stausholm. “Promotional gifts need more sustainability. They are still characterized by cheap throw away items like plastic ball pens and other stuff that has little use and soon ends up in the trash. We want to challenge the industry and offer a more thought through alternative,” he adds.

Five years ago, Sprout launched “the world’s first sustainable pencil” that could be planted after use to grow herbs, vegetables and flowers. Since then, 12 million Sprout pencils have been sold in over 80 countries.

Sustainability drive brews up new solutions for teabag packaging
Aside from the plastic waste generated by plastic spoons and stirrers used for teas, the teabags themselves can also pose a sustainability problem. They are commonly manufactured from polypropylene – a type of plastic which is added to the paper tea bag to help heat seal them during the production process so as to avoid them coming open in the box or cup.

In a bid to inject some sustainability into the space, Unilever tea brand, PG Tips, released the first run of their 100 percent renewable and biodegradable plant-based teabags in March 2018. PG Tip’s new teabags are made from a biodegradable material comprising of corn and starch, making them 100 percent renewable. R&D scientists at Unilever had been actively exploring plant-based alternatives for PG tips for some time and have already converted some ranges in Canada, Poland, and Indonesia.

Noel Clark, Vice President of Refreshment at Unilever, stated: “Tea is the most consumed beverage after water in the UK with 9 billion PG Tips tea bags made every year and after 85 years of making PG Tips, we have a great understanding on how Brits love their tea. The new 100 percent plant-based material we’re moving to is an innovation based on cutting-edge science and technology and we’re all excited that, starting from now, the PG Tips that you know and love will come from 100 percent plant-based material from a renewable source that’s fully biodegradable.”

British supermarket Co-op has also innovated on the tea front by moving to compostable teabags.

“By moving to compostable teabags, we’ll be removing about nine tons per year of polypropylene fibers, most of which goes into food waste collection and is ultimately spread on land. We’ve been working to find a less persistent, compostable sealant for a few years now. It’s fair to say that there have been some technical challenges with this, mostly around the lower melting point of PLA compared to PP. We’re working with the supplier to find a material and machine combination that works,” Rob Thompson, Packaging Technologist at Co-op, tells PackagingInsights.Click to Enlarge

However, UK Packaging Expert Richard Coles notes that there is a lack of industrial composting infrastructure in the UK. “So many of these teabags may be likely destined for landfill or waste-to-energy. Industrial composting infrastructure in the UK is under development though it still has some way to go. In addition, compostability may present a source of confusion for those consumers wishing to home compost their teabags and packaging along with their food waste.”

“Presently, most teabags are manufactured using heat-sealable polypropylene-coated paper fibers but, for industrial composting, source segregation would be needed to prevent contamination and avoid subsequent plastic pollution. However, this adds another layer of complexity and cost,” he tells PackagingInsights.

The main goal should be to ensure that there is a net environmental benefit from a packaging change, especially given the often significantly higher cost of biomaterials, Coles concludes.