You are in : All News > Frustration and uncertainty cloud progress at first round UN plastic treaty talks 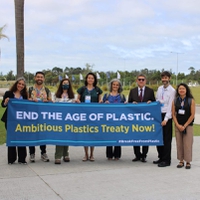 06 Dec 2022 --- The conclusion of the first intergovernmental committee meeting (INC-1) by the United Nations Environmental Programme (UNEP) to negotiate the terms of an internationally legally binding plastics pollution treaty has brought both success and frustration to the aims of key stakeholder groups, ranging from major petrochemical producers to civil society advocates and NGOs.

However, critics of the proceedings accuse the INC-1 of “dragging its feet” and failing to tackle several fundamental topics on the treaty’s formation over the coming two years. Establishing the “Rules of Procedure” – a document that will determine negotiating standards- was postponed until the INC-2 in May next year.

Outstanding issues on the Rules of Procedure include, for example, whether EU Member States will vote individually or be treated as a single bloc during voting and whether decisions should only be made via consensus. Some observers say the latter could be a ploy to weaken strong measures that could be adopted to reduce plastic production.

In September, a Reuters report revealed the US administration was recruiting allies such as Australia and Japan to form a negotiating coalition to counter European nations on the issue of self-monitoring, which some observers see as an attempt to weaken global accountability and maintain national profits at the cost of continued plastics pollution.

Waste pickers were officially recognized as stakeholders in the negotiations.Progress of a kind
Plastics and petrochemical producers, including some of the world’s top-ranked polluters like Coca-Cola and Unilever, were present at the event.

The companies joined a host of member states in calling for reductions in plastic production and use, eliminating toxic substances associated with the plastic life cycle, protecting human health and the need for a just transition.

The “Just Transition” initiative recognizes the role and importance of informal waste pickers in dealing with plastic waste globally and now ensures their representation at future INCs as key stakeholders. This transition could result in fairer working conditions and a just proportion of profits for the world’s 56 million waste pickers, who, in some regions, collect up to 90% of plastic for recycling and yet receive as little as 5% of the profits.

“Companies with revenue higher than our GDP produce plastic that we don’t have the capacity to manage, neither should it be our responsibility, and flood our markets. These products do not make goods available to people unless they can afford them, so we face the contradiction of people drinking untreated water while their environment and waterways are filled with plastic bottles.”

Chemical concerns
However, the presence of plastics producers and chemical corporations at the INC remained a contentious issue, despite their support for improved waste pickers’ rights.

Critics say the presence of plastic producers could hinder progress in the negotiations.Members of the International Council of Chemical Associations (ICCA) expressed support for typical circular economy initiatives like design-for-recycling, scaling up recycling infrastructure, and strengthening private and public sector bonds to bolster waste management financing.

The ICCA also highlighted the importance of addressing chemical additives in plastic products, a complex issue currently being revised and regulated through legislation globally.

“Additives are essential to the myriad uses of plastics in modern life. Plastic and chemical manufacturers will continue working with national governments and international negotiators throughout the INC process so additives can be used confidently and deliver the benefits essential to so many critical products,” says the organization.

Recently, the European Environmental Bureau accused chemical corporations of lobbying the EU to postpone needed hazardous chemical reforms, which it says will now sentence the bloc and its population to decades of further pollution.

Persona non grata?
Issues such as chemical legislation have led a significant number of participants at the INC to call for a ban on plastics industry players to be allowed a seat at the table, fearing corporate interests could derail the establishment of an effective treaty.

“Unfortunately, for as long as the system continues to allow a few oil and plastic producing countries to veto the decisions of the majority, the fate of this plastic treaty can only resemble that of the climate treaties and lead to the lowest ambition. The negotiations didn’t start well,” says Joan Marc, executive director of Zero Waste Europe Belgium.

Advocates also expressed concern that plastics players could be “hiding behind NGO badges” at the negotiations. Stakeholders who previously participated in the World Health Organization Framework Convention on Tobacco Control advocated strongly for the exclusion of the plastics industry in negotiations, building from their success in excluding perpetrators from tobacco negotiations, which resulted in a stronger and more effective framework.

Unilever and Too Good To Go’s latest pilot program allows consumers to have Unilever brands delivered directly to their door via an app, cutting costs and food... Read More