You are in : All News > Soil pollution studies raise further questions in microplastics debate 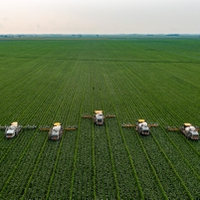 18 Aug 2022 --- Recent research shows that microplastics emerging from agricultural practices could be damaging soil quality and potentially reducing crop production. These findings are reigniting the microplastics debate, which has seen global media highlight the ubiquitous nature of plastic particles while scientists question whether they are truly a threat to human or environmental health.

Researchers from Staffordshire University, UK, and Adana University, Turkey, jointly conducted tests on soil found in the agricultural regions of Adana, where plastics are used for greenhouse covers, disposable irrigation pipes and other purposes. The findings may have implications for waste management in the packaging sector.

Soil samples were taken from ten locations in the Adana/Karata region. The number of micro-, meso-, macro-, and mega plastics that were identified in the soil where greenhouse film and irrigation piping was used was about 47, 78, 17, and 1.2-times higher than in farmlands that did not use plastic, respectively.

Findings indicated that residual plastics decreased in the soil where used plastics were removed after usage. The results, published in Environmental Science and Pollution Research, aim to guide farmers in better management of plastics.

Agricultural packaging
The irresponsible use of plastics in agriculture may give indications for the impact of landfilling plastic packaging waste. Professor Claire Gwinnett of Staffordshire University, a lead researcher on the study, explains: “Greenhouse films and irrigation piping are products commonly used in farming, and we have the same plastic uses in the UK and across Europe.”

Researchers fear microplastics could destroy crop production and urge further research.“Instead of being removed, these plastic products are often left in fields where they experience wear and tear and degradation from the sun, which breaks these plastics down into secondary microplastics.”

“Our results show that from years and years of using these plastics, microplastics are accumulating in the soil and cannot be removed.”

Staffordshire University has been conducting similar research in the UK in partnership with the National Farmers’ Union. The study looks into the amount and types of microplastic in UK agricultural soils and is said to be a first in the UK.

“Plastic usage in the agricultural sector may have worthy benefits in the short term, but the long-term effects cannot be ignored. We hope that our growing body of research can be used to inform decision-makers and kickstart real change to safeguard soil health and the future of farming,” Ginwett says.

Food security
One of the central issues suggested by the research is that damage incurred on soil health could spoil crop production and in the long run, pose a threat to international food security.

Ellie Harrison, a PhD researcher in the Staffordshire Forensic Fibres and Microplastic Research Group, is currently conducting a series of studies on the effects of microplastics on common UK crops.

She remarks: “Research into the impacts of microplastics in the agricultural soils conducted at Staffordshire University has shown that this pollutant can cause a decrease in germination rate and changes to seed production, which could have negative consequences for food production.”

In recent years, the use of plastics in agriculture has increased significantly. However, the researchers say microplastics in soil are estimated to take up to 300 years to degrade completely.

False flags?
Despite these findings, some experts warn that the news around microplastic pollution is little more than hysteria driven by the need for headlines or funding. Dr. Chris DeArmitt, a plastics expert, has described the recent emergence of studies discovering microplastics in the Arctic and Everest as “unsurprising” and probably published by people “desperate for attention to get more funding to do another equally useless study.”

His research demonstrates that microplastics pose no threat to the environment or human health at their current levels. Levels of wood particles are far more dangerous, he highlights.

“We know that microplastics in agricultural soils are abundant, varied, and are influenced by land use and farming activities. We know from a small number of studies that it can affect organisms living in the soil such as worms and springtails.”

“Studies on the effect of microplastics on plants are even rarer, but we also know that it impacts crops grown in these environments as well as livestock living there. What we need to know now is how much plastic there is and to better understand what effect this is having.”

A study conducted by researchers in Hong Kong reveals the harmful effects of ingested microplastics on liver and lung cell function from mitochondrial impairment. With... Read More