You are in : All News > Uganda’s Rwenzori Bottling Company invests in KHS PET line as demand skyrockets

30 Jul 2020 --- Germany-headquartered supplier of filling and packaging systems KHS has been awarded the contract for the new PET line of Uganda’s Rwenzori Bottling Company. In addition to KHS’ Innoket Neo labeler, the supplier package includes an InnoPET BloFill stretch blow molder/filler block with a capacity of up to 25,000 500 mL bottles per hour. Awareness of the responsible use of resources for bottled water is growing across Uganda, Rwenzori notes, while also highlighting its environmental sustainability gains.

“We’re achieving a line efficiency of 98 percent,” says Conrad van Niekerk, Managing Director of CCBA Uganda. “And Rwenzori’s water bottling line operates around the clock, seven days a week. The performance figures of this line and those from Mbarara are the best in the entire group.”

Rwenzori’s consumer base predominantly comprises middle- and upper-class consumers. It notes this demographic is willing to pay a higher price for bottled water. Accordingly, the expectations regarding the packaging of this premium product bottled in PET are high. Rwenzori produces its own bottle caps.

“Our experience with KHS has been very good. We know that we can rely on short delivery times, fast installation and commissioning and the expert support and flexibility of the KHS team,” explains Edward Ojede, Project Manager at CCBA in Uganda.

Also highlighted by Rwenzori is the support provided by the KHS experts in the company’s Bottles & Shapes program who contribute their expertise in the development and optimization of bottles. Their consultancy service produces PET bottles which have been optimized in terms of both ecology and economy and boast 100 percent line suitability and compliance with the customer’s design concepts.

Although the line was officially commissioned last May by the President of Uganda, represented by the Minister of Trade, Industry and Cooperatives, production has been running since the beginning of the year. The performance figures of the new system have even exceeded CCBA’s high expectations. 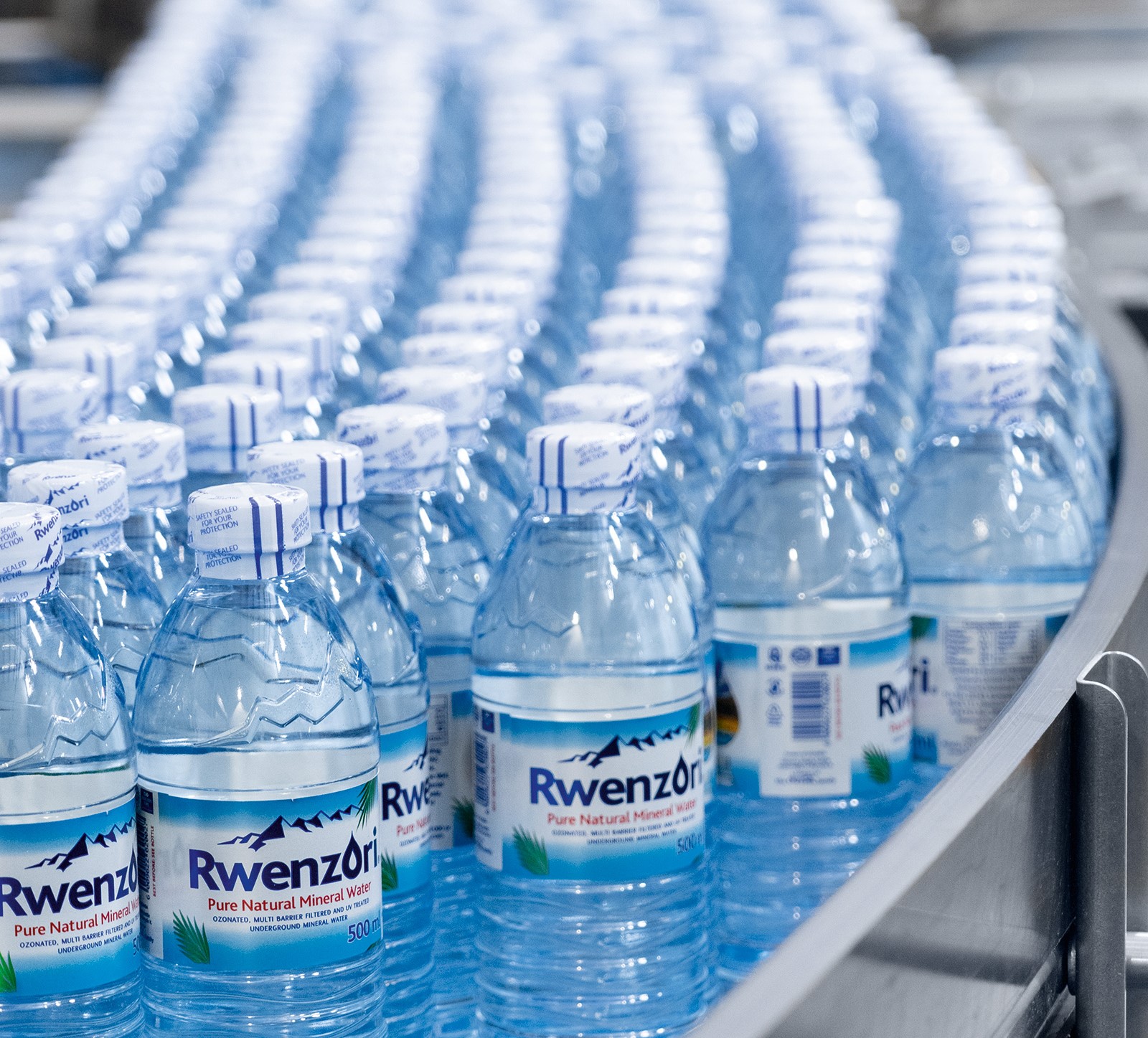 Click to EnlargeRwenzori selected KHS for its Innofill PET NV water filler – the first machine designed for still water that CCBA in Uganda has acquired to date.Coca-Cola acquisition
In 2014, Rwenzori was acquired by Coca-Cola Beverages Africa (CCBA), which operates in South and East Africa. Part of the new strategy is to locally integrate mineral water brands into their own group for further development. Targeted marketing measures can effectively exploit the growth potential – in addition to Uganda this is already happening in Kenya, Ghana and Ethiopia.

“This is the second water bottling line that CCBA will be receiving from us within a very short space of time,” adds Denise Schneider-Walimohamed, Managing Director of KHS East Africa. “Last year we installed an almost identical line at Voltic in Ghana. Until now, many customers in the region have actually associated KHS with higher-capacity machines outputting up to 80,000 bottles per hour. With these two projects we’ve been able to prove that KHS also offers excellent water bottling systems in the low-capacity range.”

Rwenzori selected KHS for its Innofill PET NV water filler – the first machine designed for still water that CCBA in Uganda has acquired to date. KHS has participated in other collaborations with CCBA in Uganda, including a PET line for carbonated Coca-Cola soft drinks installed in the city of Mbarara in 2015.

Expansion of bottled water
When the Rwenzori Bottling Company began operations in 1993, it faced the challenge that bottled water was still a relatively new and unknown product to many people in Africa. The manufacturer highlights that this has changed a lot since then, with the sale of bottled water “skyrocketing” throughout Uganda, especially in urban centers.

“Even today annual growth rates are still at 10 percent and more,” it further details. This development has been precipitated by the growing awareness that this water is safer to drink than tap water, better in quality and a brand with a long tradition.

Rwenzori also has plans for further growth of its water brand, which it notes has already gained an approximately 65 percent share of the Ugandan market. However, available space is limited for a new production line at the company’s main plant, where three smaller bottling lines are already in operation. Instead, operations are to be expanded on the site belonging to CCBA subsidiary Century Bottling Company in a nearby vicinity. The group is investing a total of US$10 million – about two-thirds of Uganda’s planned budget for 2018.

Eco-friendly bottles
In addition to efficiency, the subject of sustainability is becoming an increasingly important talking point, not only for beverage producers in Uganda but for the rest of Africa. CCBA now seeks to help ensure that by 2030,100 percent of all PET bottles sold are collected and recycled. Plastic Recycling Industries, a recycling initiative owned by CCBA and founded specifically for this purpose, buys collected PET bottles from consumers and then reintroduces them to the recovered materials cycle.

In environmental sustainability developments from KHS, the supplier recently teamed up with Austrian packaging expert Alpla to develop an ultra-light, 1 L returnable PET container. Under its “Reduce, reuse, recycle” corporate philosophy, the filling and packaging systems specialist focused on weight reduction and optimizing the container’s base and neck to achieve a weight of just 55 g.

29 Jul 2020 --- The European Council has approved the implementation of a plastic tax starting January 1, 2021, as part of its latest agreement on the new Multiannual Financial... Read More