You are in : All News > UK takes a chunk out of food waste problem with 7 percent reduction per capita, WRAP reveals

UK takes a chunk out of food waste problem with 7 percent reduction per capita, WRAP reveals

28 Jan 2020 --- Government-backed sustainability organization WRAP has revealed that the UK has made significant progress in reducing its food waste with total food waste levels falling by 480,000 tons between 2015 and 2018 – a 7 percent reduction per person. The new data comes from the not-for-profit’s latest Courtauld Commitment 2025 Milestone Progress Report, which sets our progress in food waste reduction since 2007. It reveals that households and businesses are now tackling the problem at an accelerated rate, with a greater rate of progress from 2015 to 2018 than over the preceding five years.

Since WRAP began work on household food waste, a total of 1.4 million metric tons of food has been saved from going to waste each year in UK homes compared to 2007 levels, the organization indicates. That is enough each year to fill 150,000 food collection trucks which, if placed end to end, would stretch from London to Prague.

In 2020, WRAP plans to launch a “bold and far-reaching public campaign” to ignite a national food conversation and complement the work of Love Food Hate Waste.

Just for starters
While good progress, there is much more to do across the whole food chain, WRAP warns. The report shows that UK households still waste 4.5 million metric tons of food that could have been eaten, worth £14 billion (US$18.2 billion) every year (£700 – US$912 – for an average family with children). The volume of food still wasted equates to ten billion meals.  A reduction of 4 percent in the supply chain also shows good overall progress from businesses, but WRAP says many more businesses need to step up their action on food waste to help halve global food waste by 2030. 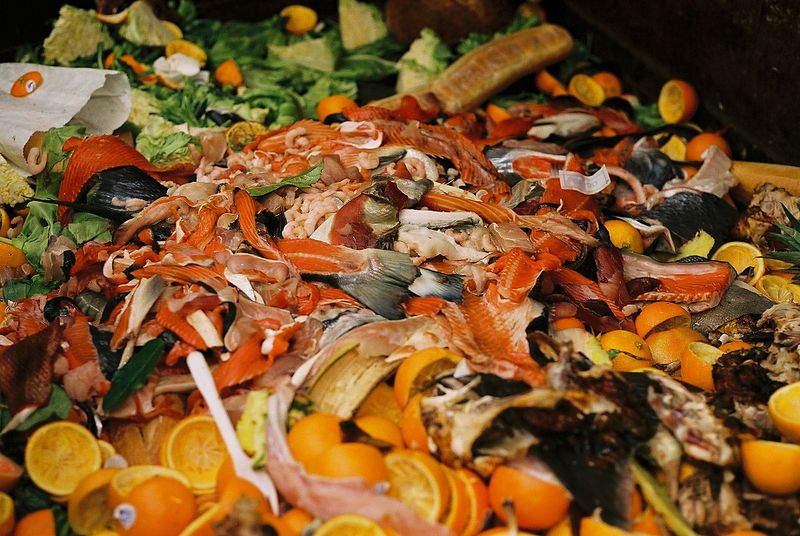 Click to Enlarge UK households still waste 4.5 million metric tons of food that could have been eaten each year, sWR

In November, WRAP issued new guidance encouraging retailers to sell more fresh produce loose and without Best Before dates. These changes could help reduce the UK’s annual food waste bill, including binned fruit and vegetables worth nearly £4 billion (US$5.1 billion), the organization says.

International commitment to halve food waste
The UN singled out the global issue of food waste for special attention in 2015 as part of its Sustainable Development Goals (SDGs). The UN’s target is to halve per capita global food waste at the retail and consumer levels and reduce food losses along production and supply chains by 2030 (SDG 12.3).

The United Nations Food and Agriculture Organization approximates that 30 percent of food produced for human consumption around the world is lost or wasted each year. This is equivalent to 1.3 billion tons of food, US$1 trillion in economic costs, around US$700 billion in environmental costs and around US$900 billion in social costs.

“We are in a new decade and have just ten years if we are to honor our international commitment to halve food waste. This really matters because it is untenable that we carry on wasting food on such a monumental scale when we are seeing the visible effects of climate change every day, and when nearly a billion people go hungry every day,” notes Marcus Gover, WRAP CEO.

“This great news announced today means we are starting to wake up to the reality of food waste, but we are too often turning a blind eye to what is happening in our homes. We are all thinking about what we can do for the environment and this is one of the most simple and powerful ways we can play our part. By wasting less food, we are helping to tackle the biggest challenges this century – feeding the world while protecting our planet.”

While the most significant drop in household food waste since 2010, WRAP’s latest annual citizen survey found that despite more of the public being aware of the issue of food waste, less than half of the population (39 percent) connect wasting food at home with the impact this has on the environment. Based on self-reported estimates for the most commonly wasted foods (potatoes, bread, chicken and milk) it appears around one in three people would still be classified as being high food wasters.

“In reducing our impact on the planet, food waste is an area where all citizens and organizations can make a difference. We are making significant progress in Scotland and our latest Programme for Government sets out further measures for action on food waste this year, together with our Circular Economy Bill, which will help tackle our throw-away culture still further,” comments Roseanna Cunningham, Scottish Environment Secretary.

“We know how important it is to tackle food waste and we are one of the few nations in the world to have universal, weekly household food waste collections, which this research shows can also help to reduce food waste. But we need to encourage more people to separate their waste effectively. Businesses and public bodies will soon be required to separate their waste too, just as households already do, helping to further reduce food waste,” adds Hannah Blythyn, Deputy Minister for Housing and Local Government.

Plastics: Vital to minimizing food waste?
Functional packaging specialist StePac recently announced its four-pillared strategy for greener packaging, prioritizing the use of plastics as a means to combat fresh produce food waste. As fresh food requires travel and processing from field-to-fork, abandoning plastic packaging would inevitably exacerbate the crisis, the supplier warns, as plastic is the medium most capable of keeping food fresher, longer and allows for wider food distribution.Click to EnlargeXtend MAP by StePac is among the packaging specialist's “Climate Positive” solutions.

StePac describes food waste as a “global epidemic,” with almost a third of all food and nearly half of all fresh produce wasted annually. Not only does this create an ethical crisis, with millions suffering food deprivation around the world, but it creates an environmental crisis – food waste contributes to about 8 percent of global greenhouse gas emissions, the supplier reports.

Widely considered to be an enemy to environmental sustainability, plastics packaging, such as StePac's Xflow solution pictured above, excels as a material in extending fresh produce shelf-life.

21 Oct 2020 --- After pledging to remove the unrecyclable plastic rings from its canned drinks 13 months ago, Budweiser Brewing Group UK and Ireland has announced success in... Read More

19 Oct 2020 --- UK Research and Investment (UKRI) is announcing the largest ever investment in UK chemical recycling technology. Four projects at the “cutting edge” of... Read More