You are in : All News > Unilever debuts in Break Free From Plastic’s top three plastic polluters despite principal COP26 role

“The world’s top plastic polluting corporations claim to be working hard to solve plastic pollution, but instead they are continuing to pump out harmful single-use plastic packaging,” underscores Emma Priestland, global corporate campaigns coordinator at BFFP.

Responding to the criticism, a Unilever spokesperson tells PackagingInsights: “Unilever is fully committed to keeping plastic out of the environment. From developing innovative ways to reduce the amount of plastic we use, such as scaling reusable and refillable formats, to creating new packaging innovations, we are determined to tackle the causes of plastic waste.”

“Coca-Cola, PepsiCo and Unilever should be leading the way in finding real solutions,” argues Priestland. “FMCGs need to reveal the extent of their plastic footprint, reduce it significantly by setting and implementing ambitious targets, and reinvent their packaging to be reusable and plastic-free.”

This is the fourth consecutive year Coca-Cola, PepsiCo and Unilever have been included on Break Free From Plastic’s Brand Audit report top ten polluters list since its audits began in 2018. 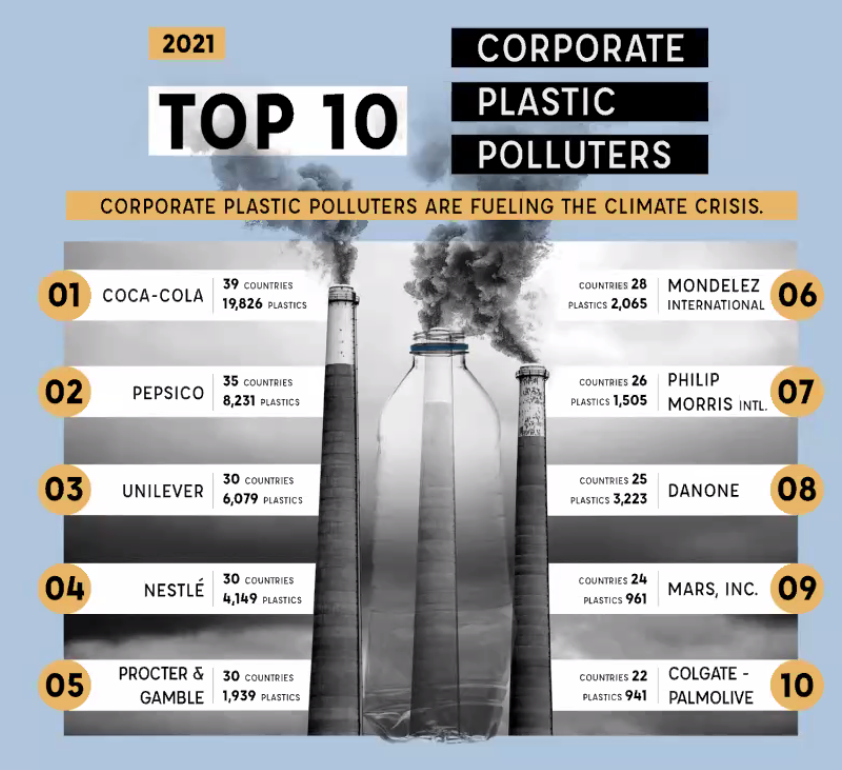 BFFP flags the irony of Unilever rising through these ranks as “particularly insulting,” considering the company’s role as principal partner for the UN climate change summit COP26 in Glasgow, UK, taking place next month.

“We know there’s more work to do, which is why we continue to look for solutions and partnerships that will help us halve our use of virgin plastic by 2025,” adds the Unilever spokesperson.

Offender number one
Retaining its “dirty crown,” twice as many Coca-Cola products were recorded in this year’s brand audit than the top two polluters combined.

BFFP flags this has been the case each year since 2019, suggesting the FMCG giant’s pledge has “little impact” on the environmental pollution caused by its products.

Speaking with PackagingInsights, a Coca-Cola representative responds: “Though we have much more to do, we are making steady progress against these goals. Bottles made with 100% recycled plastic are now available in ~30 markets around the world and this is continually growing.”

“Globally we are working to reduce the amount of packaging we use and exploring other solutions including dispensed and refillable models. More than 50% of our portfolio is in refillable or fountain packaging today and in more than 20 countries, refillables make up half or more of our sales.”

However, the Brand Audit Report highlights Coca-Cola spent US$4.24 billion in advertising and marketing in 2019, compared to just US$11 million on a river cleanup initiative that same year, “appearing more like a PR stunt.”

BFFP also slammed Coca-Cola’s partnership with The Ocean Cleanup, arguing there would be “no need for cleanups if plastic bottles never reach the rivers or oceans.”

If the entire plastic lifecycle were a country, it would be the fifth largest emitter of greenhouse gases globally, says the report (Image credit: Break Free From Plastic, 2021).Reusables underserved
PepsiCo’s ranking “remains steady,” says the report, as the company has been in the top three plastic polluters every year since 2018.

PepsiCo recently announced new voluntary commitments to halve its use of virgin plastic by 2030. The company also spearheaded pep+ (“pep positive”), a refocusing of the company’s key strategic sustainability targets, including prioritizing manufacturing, packaging and selling its products in a more circular way.

According to BFFP, however, PepsiCo’s status as a top plastic polluter is unlikely to change without a “more ambitious shift” toward more reusable containers.

Next steps: Governmental action
The data forming the report’s basis comes from a collaboration among BFFP members and allies who mobilized 11,184 volunteers to conduct 440 brand audits in 45 countries.

The brand audits recorded 330,493 pieces of plastic waste, 58% of which was marked with a clear consumer brand.

The report calls upon FMCGs to:

“It is more important than ever that national governments hold corporations accountable for their pollution, as voluntary corporate commitments are failing to reduce pollution,” the report concludes.