You are in : All News > IFE and Pro2Pac 2019: What’s trending in beverage packaging?

21 Mar 2019 --- At the Pro2pac show in London, March 17-20, which was located alongside the International Food & Drink Event (IFE), certain beverage packaging trends became clear, such as connectivity, artistic designs and a move away from plastic packaging.

A move away from plastic
Bottled water has become a symbol of recent debate around plastic use and waste. Although PET water bottles can easily enter recycling streams, many consumers are opting to quench their daily thirst on the go in different materials. 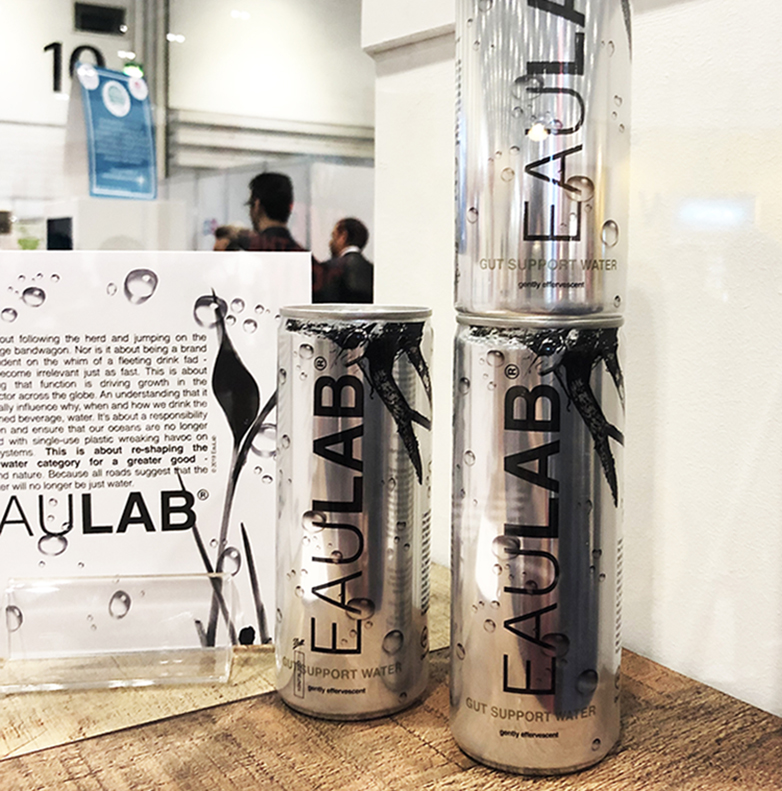 Click to EnlargeAs founder of Eaulabs – a new start-up in the beverage space – Seán Moran, says: “The bottled water sector as a whole has been sluggish in keeping up with a quickly changing marketplace. Water is primarily sold in plastic packaging, little real attention is being paid to growing consumer demand for functionality, and water is still being transported thousands of miles.”

It’s quickly becoming a case of bottled water needing to evolve, or risk becoming irrelevant, Moran notes. One way it can update itself is via a packaging revamp. Eaulabs, for example, comes in 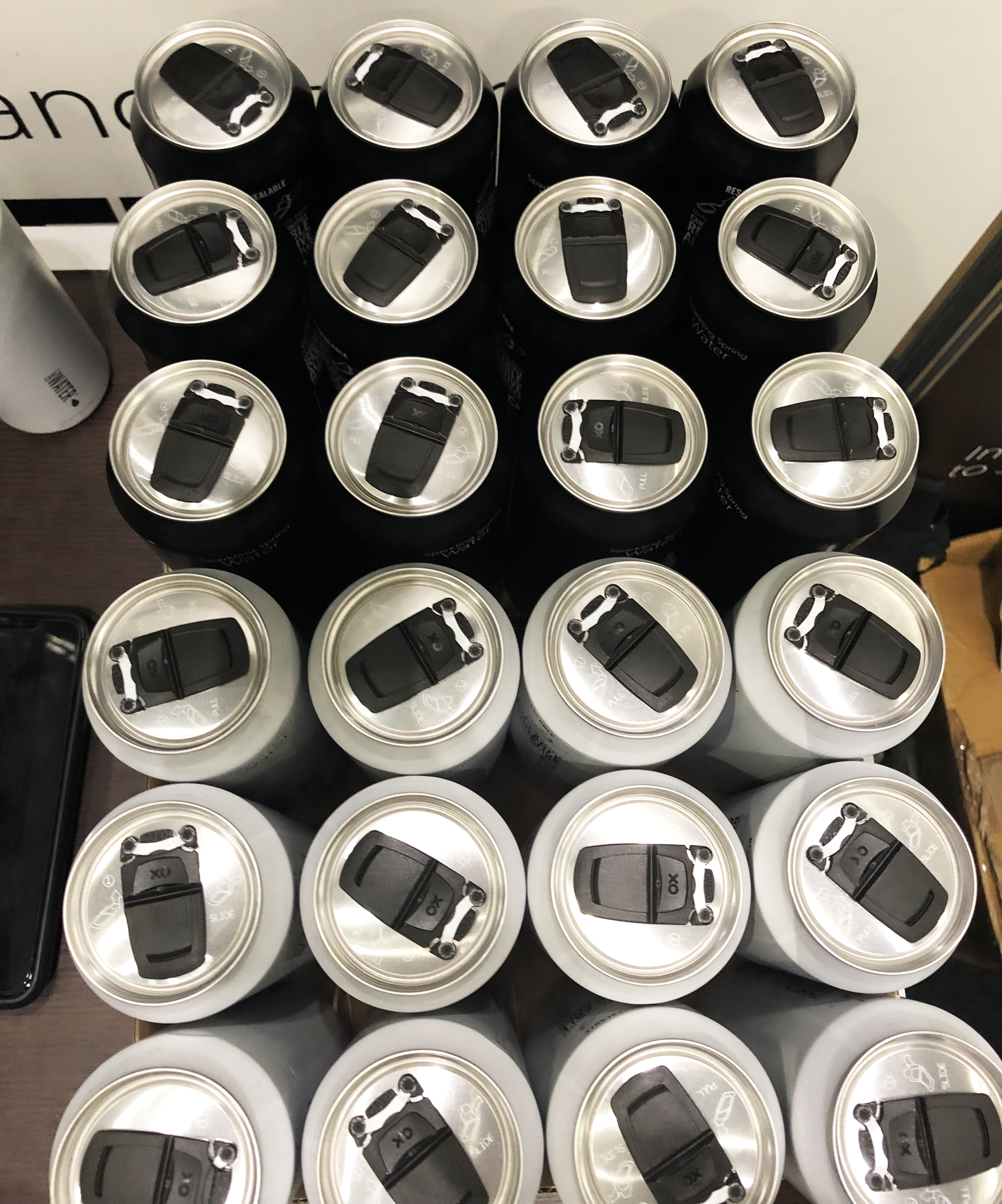 Click to EnlargeCanO Water cans are re-sealable so that they do not need to ne consumer in one go.aluminum tins supplied by Ball.

“In line with changing expectations, our brand mission is to bring nature and science together. To add real value to water with plant-based functionality that is beneficial to the human body the way Mother Nature intended. And to offer those waters in packaging that is both sustainable and mindful of the environment,” says Moran.

Eaulabs was not the only canned water at the show, as CanO Water was also exhibiting.

CanO Water was created in response to the damaging impact that plastic bottles have on the environment after a trip to a remote island opened the eyes of three close friends. With approximately 8 million tons of plastic ending up in the ocean each year, CanO Water is an “infinitely recyclable” alternative to plastic bottles. Recycle your can and it will be back on the shelf in as little as six weeks, says the company.

According to Innova Market Insights, alcoholic beverage NPD packaged in aluminium has grown. The average annual growth of alcoholic beverage launches in aluminium tracked reached 29 percent, while glass launches reached only 12 percent (CAGR 2014-2018). This could demonstrate how suppliers are moving away from glass in a bid to lightweight their packaging and save on carbon emissions. Aluminium is also often regarded as a more sustainable alternative to plastic, especially as consumer's exhibit rising anti-plastic sentiment. Wether or not this is the case, CanO Water's promise, for example, that after recycling each can will be back on the shelf within six weeks is an attractive selling point. 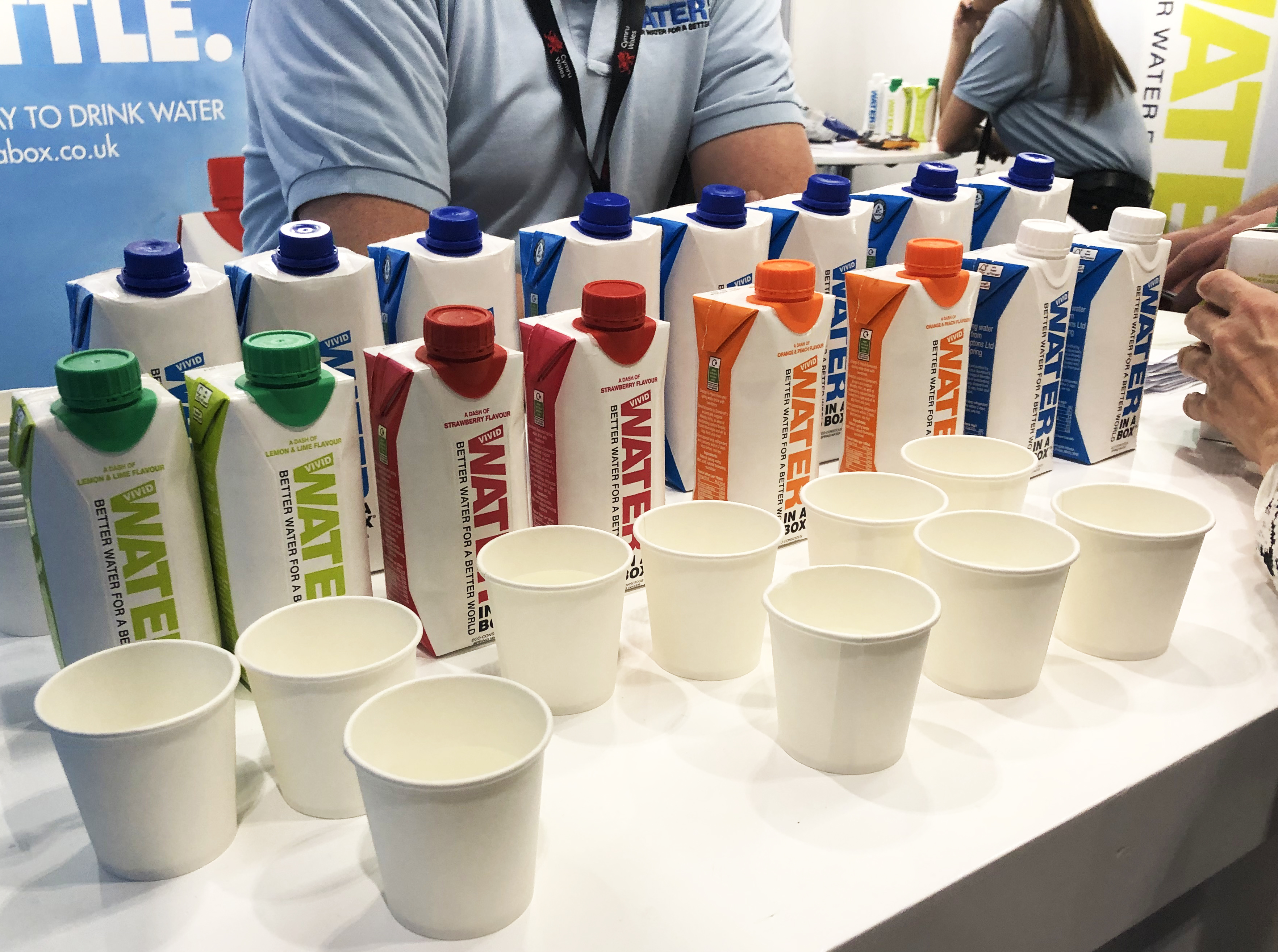 Click to EnlargeAs well as water in cans, a number of start-ups were exhibiting their water ranges in Tetra Pak cartons.

FACT water
Connected packaging technologies were also visible among the beverage offerings at the show.

In a first for the beverage industry, Crown Bevcan Europe & Middle East, a business unit of Crown Holdings launched its CrownConnect technology in conjunction with FACT, an all-natural sparkling drink. Each can is marked with a 2D unique scannable code, making FACT beverage cans the first ever to be produced with a unique digital identity.

To this end, Crown partnered with “tech-savvy” entrepreneur Olly Bolton, to launch Almond, a blockchain platform that allows consumers to scan a unique hidden product code and rewards them by unlocking tokens that are redeemable for cash. The platform, launched in June last year, also unlocks details of FACT Water’s story, giving unprecedented access to supply chain information and building deeper, trusting relationships with consumers that will ultimately foster brand loyalty.

Speaking to PackagingInsights, a Waterbomb – who sell FACT – spokesperson noted, “connected packaging technologies are not cheap, you need to be more established to implement them.”Click to Enlarge

“We developed almond to support the sales of FACT and to encourage ethical purchasing behavior. You need to download the app and then you have access to Almond. It’s a new technology, but we have had a large number of downloads so far. The app shows how the drink is made from fruit to sip,’ where the ingredients are from and where the can is from, plus the carbon footprint of the drink. We have nothing to hide,” he explains.

As consumers demand transparency, FMCG companies need not shy away from sharing with consumer what goes into their products and how they are produced and the spokesperson notes that the technology will soon expand to other Waterbomb ranges.

Connected packaging technologies were also prominent at Packaging Innovations, held in Birmingham, UK, in Febraury. Near-Field Communication (NFC), as well as ther connective technologies, are readying for full-scale deployments across multiple markets in 2019, industry expert predicted at the show.

“The big difference between this year and last year with NFC is that the technology is starting to be applied in standardized ways. You now have companies like Guala Closures, for example, who are producing what they call the ‘e-WAK,’ which is an NFC-enabled wine closure. It offers a clear proposition to brands which says: There will be no change to your production lines but this is now NFC-enabled. They have removed all those barriers to entry,” he explains to PackagingInsights.

Artistic design
Indulgence is still key in NPD for alcoholic beverages, as companies continue to offer high-end artisanal and handcrafted liqueurs using seasonal flavors and novel ingredients. In the alcoholic beverages space, bespoke and artistic label designs were prominent at the show. This was particularly true of the gin offerings. The most common material choice here was glass, which is typical of the premium alcohol market. 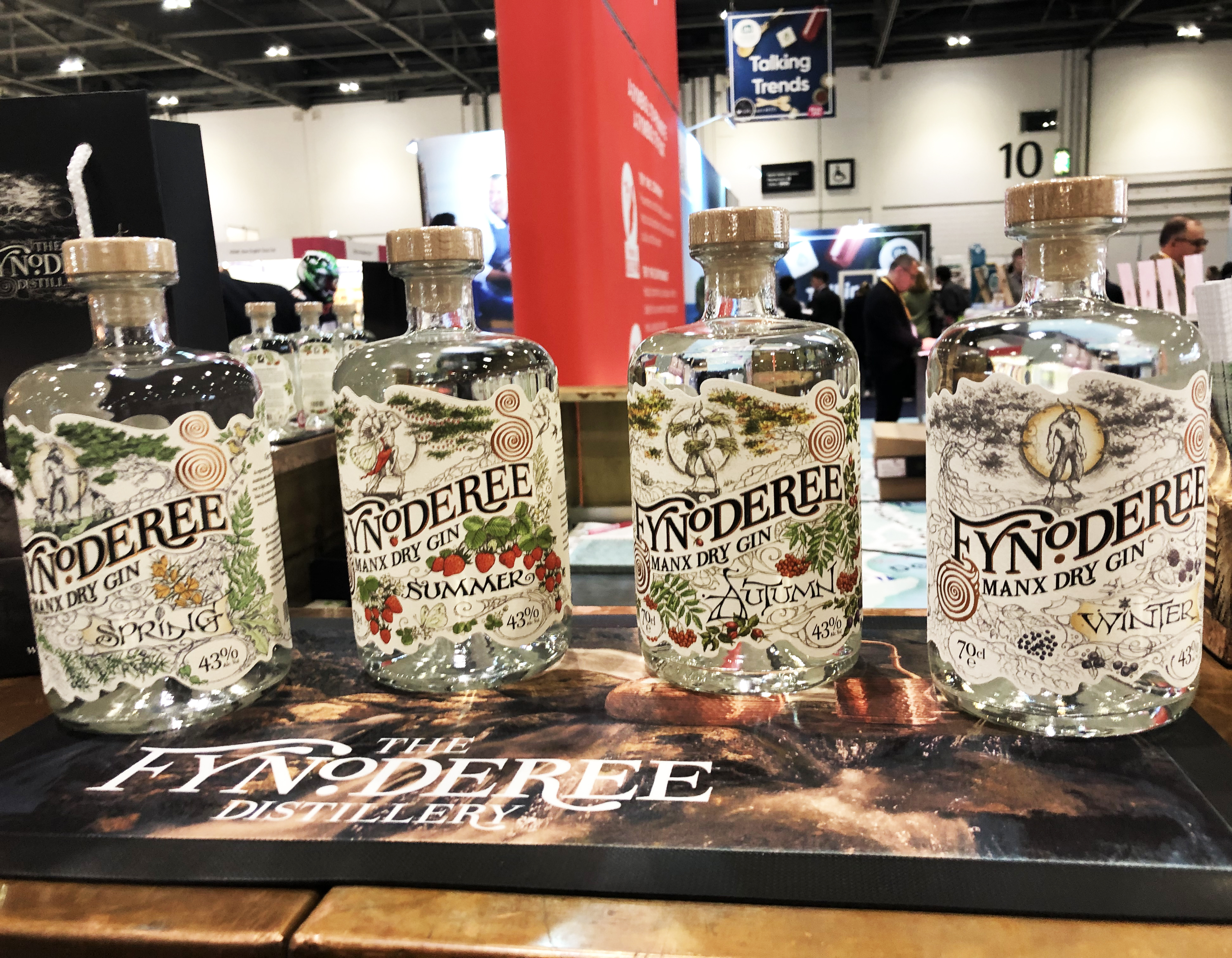 Click to EnlargeA clear example came from The Fynoderee Distillery, an artisan producer of premium craft spirits. The company has taken its unique branding and translated it into its packaging.

The name Fynoderee is from an ancient folklore tale, based in the north of the Island in a region where the last Manx juniper tree was reputed to grow and where juniper is now being introduced. The designs featured on the labels are based on this folklore tale.

As a large food and beverage show located early-on in the year, IFE and Pro2Pac are useful indicators of the trends that will dominate 2019. Regarding packaging for beverages, we can expect more innovation in packaging for water that moves away from the classic PET model, as well as connected packaging solutions and the continuation of glass as the choice for bespoke, alcoholic offerings.

22 May 2020 --- This week in packaging, Smurfit Kappa signed a commitment to align its CO2 reduction target with the Science Based Target (SBT) initiative. SBT will validate that... Read More

14 May 2020 --- Tetra Pak has launched its first complete processing line for white cheese products with a fully automated and integrated solution to ensure a high standard of food... Read More