You are in : All News > Alpla spearheads Romanian PET recycling facility to slash Eastern European waste 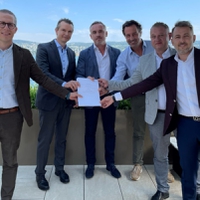 The rPET granulate will be used to manufacture new preforms and bottles, strengthening the local materials cycle within the Central and South-Eastern Europe region.

Each company is investing equally in installing an extrusion line to recycle PCR rPET bottles at the Romanian partner’s site.

Three partners, three areas of expertise
Alpla will act as the partnership’s recycling specialist and a preform and bottle manufacturer. At the same time, Ecohelp will supply base material in PET flakes that go through an extrusion process to make high-grade rPET granules.

UPT, in turn, co-owns the rPET upcycling facility in Cumapol Emmen in the Netherlands, which specializes in trading plastics and recycled material.

The entire amount invested in the plant at Targu Mures, Romania,and the associated building and infrastructure is estimated at roughly €7.5 million (US$8.8 million).

The plant expansion is also expected to create 15 new jobs.

Supporting Romania’s circular economy
Alpla’s chairman Günther Lehner, who is responsible for developing the company’s circular economy capabilities, emphasizes the significance of the investment in the region.

“Our aim at Alpla now and in the future is to establish a bottle-to-bottle cycle, including in regions in which the collection and recycling of waste still has potential for development. By participating in this joint venture, we are taking a strategically important and sustainable step in this direction.” rPET is in increasingly high demand throughout Europe.

“We are seeing consistent growing demand from our customers for recycled material, and this demand is worldwide and unbroken. It and our customers’ need to close local material cycles give us an opportunity to boost investment projects like these.”

The joint venture is subject to regulatory approval by competition authorities. The parties signed the contract for it on September 9, 2021, with production planned to commence in mid-2022. The parties have agreed not to disclose any further details.

Alpla advances recycling
This year, Alpla announced it would invest an average of €50 million (US$58 million) each year in the ongoing expansion of its recycling activities until 2025.

It plans to globalize its activities in the area of high-quality recyclates to close the materials cycle in as many regions as possible. In all, the annual capacity of the Alpla recycling companies, joint ventures and partnerships amounts to approximately 130,000 tons of PET and 60,000 tons of polyethylene.

The company also recently began reinforcing its research into fossil-based plastic alternatives by acquiring a minority stake in Slovak company Panara. Panara specializes in the development of fully bio-based and biodegradable plastics.

Alpla says it is pursuing a holistic approach to packaging design in which all of its bottles and caps are developed for a functioning circular economy.

In other big news, Swedish Plastic Recycling (Svensk Plaståtervinning) invested SEK 1 billion (US$116 million) into what it says will be the world’s largest plastic recycling facility, named Site Zero.

﻿Using advanced recycling technologies, the site will have the capacity to recycle any plastic used in Sweden – including PET – using entirely renewable energy, making the country’s plastic economy completely circular.

The National Association for PET Container Resources (NAPCOR) has revealed a 10% increase in recycled PET (rPET) end-use consumption in the US and Canada in 2020.... Read More