You are in : All News > Coca-Cola eliminates virgin plastic in all on-the-go bottles sold in Great Britain

01 Jul 2021 --- Coca-Cola Great Britain is set to use 100 percent recycled PET (rPET) in all on-the-go bottles across its entire range starting this September.

The rPET transition will apply to all bottles of 500 ml or less and save an estimated 29,000 metric tons of virgin plastic each year – the equivalent of 2,292 double-decker buses. All Coca-Cola’s PET and rPET bottles are recyclable.

PET circular economy
The rollout commences in September when the first 100 percent recycled 500 ml bottles will start appearing on shelves.

The transition is another step on Coca-Cola’s journey toward 100 percent recycled or renewable plastic in all its bottles and developing a circular economy for its PET packaging.

The company is also completing the transition from plastic shrink wrap to cardboard packaging across all multipacks. As a result, more than 30 million packs sold to consumers each year will no longer be wrapped in plastic.

A “well-designed” DRS
Although all of Coca-Cola’s bottles have been fully recyclable for many years, too many are still not being recycled, the company highlights.

To make it easier to recycle plastic bottles, Coca-Cola has been working closely with the Scottish and Westminster governments and industry partners on a well-designed Deposit Return Scheme (DRS).According to WRAP, 75% less energy is required to make a plastic bottle from rPET.

The beverage giant says a well-designed DRS will encourage more people to recycle and ensure a greater collection of bottles in a clean, efficient way so they can be remade into new bottles in a repeated cycle.

DRS is planned for implementation in Scotland by July next year, followed by England and Wales.

“Increasing the amount of recycled plastic we use is a critical point in our sustainable packaging journey and reaching 100 percent rPET puts us one step closer to achieving our ambition of a world without waste, collecting and recycling a bottle or can for every one that we sell by 2025,” comments Stephen Moorhouse, general manager at CCEP GB.

Environment Minister, Rebecca Pow, adds: “I am delighted to see Coca-Cola Great Britain taking this significant step to ensure its on-the-go bottles are made from 100 percent recycled plastic.”

“We are committed to crack down on plastic pollution through our landmark reforms such as a DRS for drinks containers and making manufacturers more responsible for their packaging. Bold measures of this nature from industry will play a huge role in helping us to achieve this ambition.”

In March, the UK’s Department of Environment and Rural Affairs launched an industry consultation on implementing DRS and an updated Extended Producer Responsibility scheme.

With plastic waste significantly contributing to fossil emissions when incinerated, it’s crucial to specify recycled content and keep packaging in a circular system, she says. 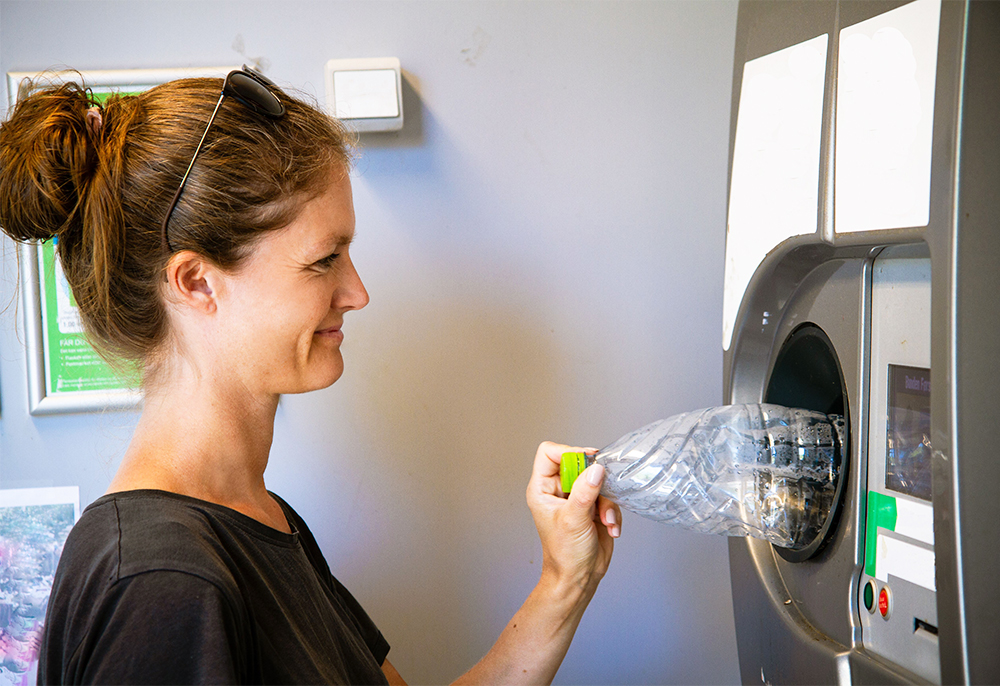 Coca-Cola has been working with the Scottish and Westminster governments to design an effective DRS.

“It’s positive to see Coke, a founding member of The UK Plastics Pact, continuing to push the boundaries on design and engaging with its customers to place the bottles in the recycling, since achieving 100 percent recycled content is going to be strongly reliant on getting those bottles back.”

More broadly, Coca-Cola continues to use the power of its brands and advertising to encourage people to recycle more – from launching major advertising campaigns to including recycling messages on its packaging in all marketing campaigns and experiential events.

Earlier this month, the company launched a marketing campaign for its Glacéau Smartwater brand, encouraging more people to recycle the bottles.

Bold messaging on-pack reminds consumers the bottles are fully recyclable and made from rPET.

In the US, Coca-Cola launched a 13.2 oz “sippable” bottle made from 100 percent rPET, excluding the cap and label, as part of a range of new virgin plastic reduction measures.

However, Break Free From Plastic has urged FMCG giants like Coca-Cola to invest more in reusable packaging options.

Scotland will implement a deposit return scheme (DRS) on August 16, 2023 that will differ from the rest of the UK. While the Scottish system may be effective in limiting... Read More

Greiner Packaging is acquiring Serbia-based producer of PET flakes Alwag and is thereby broadening its business portfolio, adding the first recycling company to the... Read More

Coca-Cola Europacific Partners (CCEP) is partnering with the University of California Berkeley (UCB), US, to develop methods of converting captured carbon (CO2) into... Read More