You are in : All News > Coca-Cola shifts brand logo to top of can in “uplifting” visual metaphor redesign 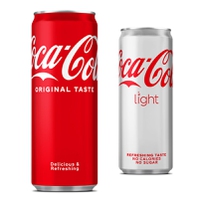 16 Apr 2021 --- The Coca-Cola Company is unveiling a new can design system for the Coca-Cola trademark in its first global packaging redesign in five years.

The changes apply to Coca-Cola, Coca-Cola Zero Sugar and Coca-Cola Light, as an evolution of the “One Brand” strategy launched worldwide in 2016 to provide a “simple and intuitive navigation system.”

As an “uplifting” visual metaphor, the new design raises the Coca-Cola logo to the top of the label. To further simplify the design, added elements such as the red disc are removed to “elevate the iconic trademarks with global consistency,” says the company.

Keeping the spirit alive
The new design system is Coca-Cola’s latest initiative to raise consumer spirits during the COVID-19 pandemic.

At the start of the year, the FMCG giant replaced its logo on its aluminum cans and plastic bottles with a series of “inspiring” resolutions in an “Open To Better” initiative for the year ahead.

Coca-Cola customers could customize their beverages online, filling in on-pack phrases such as “I will never ____ without you again” or “This year I will ____.”

In other eco-friendly efforts, Coca-Cola launched a sip-sized rPET bottle, transitioned Sprite bottles from green to clear plastic for easier recycling and is currently trialing a paper bottle in Hungary.

Tesco is launching a reusable packaging initiative in partnership with TerraCycle’s global Loop program, debuting in ten of its UK stores. Featuring a range of 88... Read More

US environmental non-profit The Last Beach Cleanup has filed a lawsuit against TerraCycle and eight product companies, including L’Oreal USA and the Coca-Cola... Read More