You are in : All News > Cup, cup and away: Starbucks and Gatwick Airport launch reusable coffee cup trial 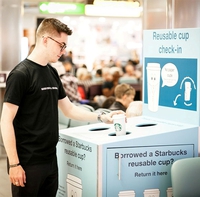 The trial aims to encourage customers to reduce disposable cup use throughout the international airport’s South Terminal. Starbucks customers will be given the option to borrow a free reusable cup for their drink instead of using a paper cup, which they can then drop off at one of five “Cup Check-In” points throughout the airport before they board their flight.

“The cup we are using for this trial is Starbucks’ standard reusable cup which is made from PP (Polypropylene) and we will arrange for the cups to be recycled when they are no longer in a good enough condition to be reused,” Trewin Restorick, Founder and CEO of Hubbub tells PackagingInsights.Starbucks’ standard reusable cup made from Polypropylene will be used in the trial.

The “Cup Check-In” points will be at the airside Starbucks store with four more spread across the terminal so that travelers won’t need to go out of their way to return the cup before they board. Once collected, these cups will be washed and returned to store to begin their journey through the airport again.

The reusable option will be promoted by the Starbucks store team and reinforced through messaging at the airport and on social media. Hubbub’s previous work with Starbucks suggests that putting 2,000 reusable Starbucks cups in circulation throughout the South Terminal has the potential to dramatically reduce the number of paper cups thrown away.

This latest trial is considered to be a “significant development” for Gatwick as it moves the emphasis towards reuse rather than disposal. Culturally, this is a major shift as most people do not take reusable cups to airports and consequently, Gatwick currently disposes of a reported 7 million paper cups annually of which 5.3 million are recycled.Once collected, the cups will be washed and returned to store to begin their journey through the airport again.

Hubbub and Starbucks will openly share the results from the trial as part of the continuing ambition to encourage greater take-up of reusable cups. In the coming months, the partnership will announce further campaigns around the UK based on ongoing cultural research.

“We are really excited to see how the trial goes, and whether customers will get on board with reusing. Very early indications from Gatwick yesterday were very positive, and we look forward to sharing the full results when we have them,” Restorick notes.

The results of the trial will give a unique insight into the challenges of changing behavior at a busy international airport, he says. It will identify whether people’s concern about plastic waste can be translated into practical action if it is made easy and convenient. What is learned will provide valuable insight into how to deploy a reusable trial in not only other airports but many other environments.

The reusable model will be promoted by the Starbucks store team and reinforced through messaging at the airport.There is a recognition that disposable cups are still used by the majority. Starbucks is working with other major companies to design a new type of mass-market cup that is environmentally preferable to the one currently used.

While this development work is underway, Hubbub is also using the funding provided by the 5p charge on Starbucks disposable cups to test new ways to promote recycling on the High Street in Leeds, Swansea and Edinburgh. It has also launched a significant new Cup Fund which will help up to 15 busy locations introduce cup recycling facilities later this year.

As a way to engage children and communities in positive clean-up activities, Starbucks funding has been used to support a “Plastic Fishing tour,” using a boat made of recycled plastic. It has been helping remove plastic waste from waterways in Birmingham, Bristol, Manchester and parts of Scotland.

In April, Starbucks announced that it is doing away with the conventional mode of serving beverages and trialing “greener” compostable cups and strawless lids, alongside the development of a new app that allows customers to digitally trace their packaged coffee beans “from seed to cup.” Over the next year, the company aims to dispatch these innovations in several markets worldwide.

Coveris and Neoen partner on wind energy in “No Waste” vision

Coveris has signed a ten year purchase agreement with Neoen and is investing in green energy that meets the electricity needs of its European plants. The energy will be... Read More

“A mockery of the pledge”: UK’s DRS plans spark anger as glass is excluded

The UK Department for Environment Food and Rural Affairs (DEFRA) is planning to roll out a deposit return scheme (DRS) in England, Wales and Northern Ireland. It is set... Read More