You are in : All News > Ecoams Planet shrinks PET bottle recycling down to size with patented rubber band invention 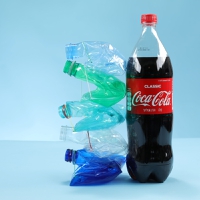 The company says this simple addition could drastically reduce the environmental impact of the 480 billion soft drink bottles being disposed of annually.

Maurice Amsellem, the founder and CEO of Ecoams, discusses the invention and what it could mean for the global beverage packaging industry with PackagingInsights.

Amsellem says he has been working on the Bakbuk invention since 2016 and so far gained patents in 67 countries.

His inspiration to create a waste solution was drawn from statistics predicting PET bottle consumption to rise to 583 billion per year by 2021.

“We wanted to find a simple and useful way to compact plastic bottles without using the cap since it is not made of the same PET material as the plastic bottles.”

“This is a problem that people worldwide encounter as plastic bottles take up space and complicate the sorting process. This invention is a way to make each consumer responsible for recycling.”

Creating the Bakbuk
Amsellem says the first big challenge was to be able to patent an elastic band. Approximately US$850,000 was invested into securing the patent.

Click to EnlargeThe elastic is food-grade and has an elasticity of 700%.When the patent was first filed in Israel, “the committee found the idea brilliant because of its simplicity and its usefulness,” Amsellem says.

The unique concept on which the patent is based is a recyclable elastic band allowing each bottle to be compacted by simply folding it.

The second challenge was to develop a recyclable, food-grade elastic that would meet all the necessary standards.

The Bakbuk is not a normal elastic band. “It is not a simple elastic. It is specially designed to be food-grade, recyclable and with an elasticity of 700 percent.”

“Its weight is also insignificant, at 0.07 grams. Fifteen elastics for one gram.” A bag that would typically carry six bottles could, with the Bakbuk, carry 26.

The third challenge, says Amsellem, was to make the bottles compacted with the elastic band recognizable by reverse vending machines, which function in deposit return schemes (DRS).

The patent qualities allow for a cost-effective and universal application for all types of large PET bottles without affecting their price, structure and manufacturing process.

Ecoams says it has worked with “one of the biggest French companies” to design a recyclable elastic with the lowest environmental impact.Click to EnlargeBottles using Bakbuk are recognized in reverse vending machines.

Bringing Bakbuk to market
After conducting independent research into consumer interest for the Bakbuk, Amsellem says Ecoams is currently being solicited by several important beverage manufacturers who are “very interested” in bringing the innovation to market.

In a survey of 500 US respondents, Ecoams found 60 percent of consumers would be somewhat or much more inclined to purchase a single-use plastic drinking bottle if it included an invention allowing them to shrink the bottle after use.

Three out of five said they found the invention “very important,” and the majority said they would view any company using the Bakbuk as environmentally responsible.

Over 80 percent also said they think it would make recycling easier and be willing to pay 2.5 cents more per bottle to have it included.

These benefits could cut carbon emissions associated with transport and increase the willingness of consumers to actively recycle, concludes Amsellem.

17 May 2021 --- Dow is entering into a tripartite partnership with Lucro Plastecycle, an Indian recycling company, and Marico, a leading Indian consumer goods company. The... Read More

14 May 2021 --- Seven Fraunhofer institutes are pooling their expertise to create new plastic recycling opportunities for the chemical industry. Called Waste4Future, the... Read More

13 May 2021 --- With the Rethinking Materials virtual summit (May 19-20) now less than a week away, PackagingInsights interviews Marco Jansen, Braskem’s director of... Read More

12 May 2021 --- Stora Enso and Pulpex are joining forces to industrialize the production of bottles and containers made from wood fiber pulp. Sohrab Kazemahvazi, senior vice... Read More