You are in : All News > KHS papers over the cracks with plastic-alternative tray packer

KHS papers over the cracks with plastic-alternative tray packer

01 Jul 2020 --- The KHS Group has unveiled a tray packer technology that enables cans of food and beverages to be wrapped in paper. The tried-and-tested Innopack Kisters tray packer provides an alternative to hard-to-recycle shrink film or wrap-around cartons and cuts costs by lowering materials and energy consumption. With a few minor adjustments, existing Innopack Kisters tray packer machines can be converted to the new setup.

KHS first experimented with the idea of using paper as a secondary packaging around 20 years ago. “Back then, this technology didn’t catch on, however, as paper was a cost-intensive raw material and wrapping containers in film yielded better results regarding stability,” says Karl-Heinz Klumpe, Packaging Product Manager at KHS.

Modular machine design
To wrap cans in paper instead of film just a few adjustments are needed to the well-established Innopack Kisters tray packer. “KHS is increasingly supplying modular systems and solutions that enable and ease the appropriate conversions to our machines. In this case, we’ve simply reengineered the process module for folding and wrapping,” Klumpe explains.

“The standard components such as tray separation from the magazine, gluing or can feed are identical to those on the hundreds of proven KHS machines already on the market.” This allows beverage producers to have the tray packers already in operation at their plants converted simply by adapting certain modules, avoiding the need for completely new investments.

Wrapping cans in paper has many advantages over other materials, according to Klumpe. “On the one hand, paper is kinder to the environment than film with respect to ocean pollution, for instance. Paper biodegrades in the environment after a few weeks.” On the other hand, fewer packaging materials are used. Instead of a sturdy wrap-around carton or film packs on trays, packaging cans in thinner paper only needs a flat, stable corrugated card pad as a base – with identical results by way of stability.

Cutting costs
Costs are also cut by the new paper pack: compared to a wrap-around carton by up to 15 percent, with outgoings about the same as for film, KHS indicates. Overheads are also considerably reduced by the low energy consumption of about 14 kWh an hour at 80 cycles a minute. The folding process is such that the pack is also fully enclosed. “In contrast, dirt can get into film packs with small side openings. Over long distances, paper has a clear advantage when it comes to protecting the pack,” Klumpe explains. 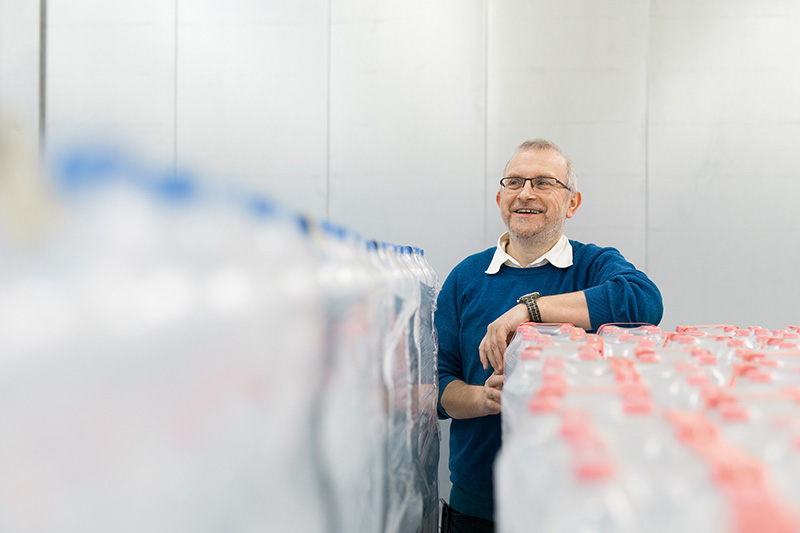 Click to Enlarge“KHS is increasingly supplying modular systems and solutions that enable and ease the appropriate conversions to our machines,” says Klumpe, Packaging Product Manager at KHS.Klumpe sees huge potential for the new KHS technology. “When I think about how much food is canned all over the world, with our paper pack we offer a useful alternative to conventional secondary packaging. With our system, we can significantly help to cut down on the amount of plastic waste being generated.”

According to Klumpe, this will support the efforts being made throughout the entire sector to protect the environment. “Sustainability is also always a cost factor, however. With our new approach, we’re catering for both aspects here.”

In May, KHS invested €20 million in modernizing its headquarters in Dortmund, Germany. In a bundle of measures underway since 2015, the global provider of filling and packaging systems for the beverage industry has built a huge, approximately 4,300 m2 production shop and fully renovated another. KHS identified the headquarters modernization as a means to further automate and digitize its production processes and remain competitive in the long-term.

21 Oct 2020 --- After pledging to remove the unrecyclable plastic rings from its canned drinks 13 months ago, Budweiser Brewing Group UK and Ireland has announced success in... Read More

07 Oct 2020 --- Smurfit Kappa is releasing an innovation to reduce non-sustainable materials in banana production. The BanaBag is a paper-based wrapping that covers the fruit to... Read More