You are in : All News > Plastic-free banana packs: Iceland becomes first UK supermarket to rollout concept

17 Sep 2018 --- UK supermarket Iceland is set to remove all plastic packaging from its bananas in a move that is anticipated to save 10 million plastic bags a year. The new packaging will consist of a recycled paper band, which is recyclable itself. The concept has launched in three Iceland stores as an initial trial and will extend to a further 120 stores later this week, before a national rollout by the end of the year.

The newly packaged bananas are the first product in any major UK supermarket to bear the Plastic Free Trust Mark, launched by campaign group A Plastic Planet earlier this year. The mark hopes to cut consumer confusion by showing which packages are completely plastic-free. The bananas are also the first completely plastic-free bananas in UK supermarkets. 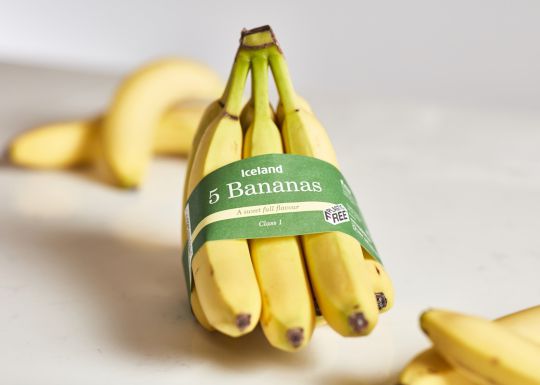 Click to Enlarge“People have become so used to buying their products wrapped in plastic, or indeed using plastic bags for loose produce, and this has to stop if we are to turn down the tap on plastics,” says Richard Walker, Iceland Managing Director.

“This move alone will have a significant impact on our plastics consumption and is one of the first of many solutions that are in development. Our customers support our move to reduce single-use plastic and we are pleased to share this important milestone, with many more to come,” he adds.

Plastic-free commitments
Iceland has arguably led the way in terms of reducing its plastic packaging footprint. In March, it became the first major retailer to commit to eliminating plastic packaging for all of its own brand products, within five years to help end the burden of plastic pollution.

The company has said it will replace plastic with packaging including paper and pulp trays which would be completely recyclable through support for initiatives such as a bottle deposit return scheme for plastic bottles and in-store recycling.

Iceland was also the first UK supermarket to adopt the Plastic-Free Trust Mark from A Plastic Planet. The notable campaign group has attracted headlines through its high-profile collaborations, such as with Dutch organic supermarket chain, Ekoplaza, to unveil the world’s first plastic-free food aisle.

Regarding other UK supermarkets’ efforts to reduce plastic, last month, Waitrose & Partners replaced plastic bags with a sticky band on its Duchy Organic brand of bananas, stating that the move would save eight tons of plastic a year.

It also announced last week that all loose fruit and vegetable bags will be replaced with a home compostable alternative by spring 2019. This move hopes to cut almost 134 million bags each year from the environment, which equates to 500 tons of plastic.

These developments are welcome news following the headline-hitting finding from UK consumer group Which? that nearly a third of plastic packaging used in supermarkets is either non-recyclable or difficult to recycle.

16 Jan 2020 --- Nestlé has announced an investment of up to 2 billion Swiss francs (US$2.08 billion) to pioneer the shift from virgin plastics to food-grade recycled... Read More