You are in : All News > Rethink Plastic: Reusable packaging is driven by private initiatives, policy must provide support

17 Oct 2019 --- Government backing is crucial to slashing plastic pollution by increasing access to reusable options, highlights a report from Break Free From Plastic Europe and the Rethink Plastic alliance. The report centers around reusable solutions, which it says are key to cutting the amount of single-use plastic packaging and products. Using case studies from around the continent as evidence, the report calls on governments to ban a variety of single-use items to achieve an 80 percent reduction on single-use plastic cups and food containers by 2030.

“Governments have hardly taken substantive action to truly incentivize reuse. Single-use products still dominate the market and it is small-scale private initiatives that are really leading the way on reusables, which are the final answer,” Meadhbh Bolger, Resource Justice Campaigner at Friends of the Earth Europe and co-author of the report, tells PackagingInsights.

The move toward recyclability is also not enough as “recyclable” items are often not finally recycled or are shipped overseas, she continues. “Reusables are the closest to guaranteeing full circularity, especially when set up the right way with deposit return schemes (DRS) in place that ensure customers will return the item for reuse again and again.”

Other proposed measures that build on the EU’s single-use plastic laws include: 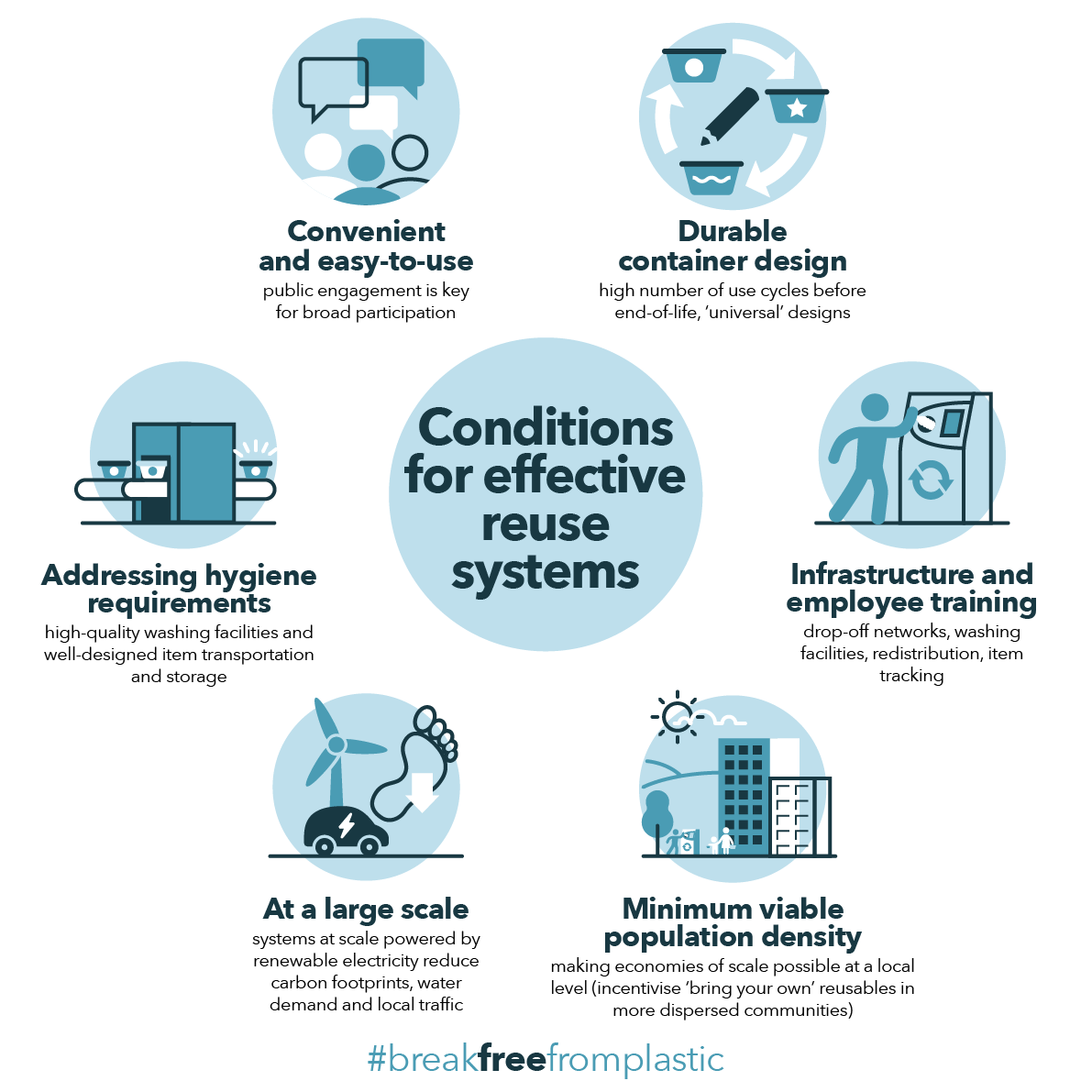 The report makes a variety of recommendations for an effective reuse system. “Benefits of reuse systems are countless, yet such zero-waste business models encounter many challenges to get their way through the current market dominated by single-use. Policy intervention is key to allowing such positive change to be rolled out across the EU and become the norm,” says Larissa Copello, Consumption and Production Campaigner at Zero Waste Europe.

If governments switched to reusable products instead of wasteful single-use plastics, they would slash plastic pollution and save local authorities money for collection and waste clean-up, argues Bolger. Additionally, the switch would create local jobs in the collection, transport and washing of the reusable product to be put back on the market.

“There are also proven cost savings for municipalities that no longer need to spend thousands of euros on the clean-up, collection and management of single-use plastics and products,” she adds. However, Bolger does concede that although the vast majority of single-use products can be replaced, some are essential – especially those for medical purposes.

Building on prior examples
The report uses previous localized schemes as case studies to demonstrate the potential efficacy of various methods. For example, 1.5 metric tons of food packaging waste is saved annually in Brussels, Belgium. This is through 1,000 members of Dabbawala lunch delivery and return system that uses reusable steel takeaway boxes. This also saves €20,000 (US$22,000) in the purchase of disposable containers.

Meanwhile, reusable cup scheme “ReCup” is used by almost 3,000 vendors in over 450 cities in Germany. Citizens pay a €1 (US$1.11) deposit per cup, which is refunded when it is returned to a vendor. Half a million of these cups are in circulation, and each can be reused up to 500 times. The country’s DRS is also very effective, with 99 percent of reusable glass bottles being returned. This means that they are cleaned and refilled up to 50 times.

On a larger scale, Terracycle’s reusable grocery packaging program Loop has been trialing in a number of European cities this year, with future launches planned for the US. It has attracted a host of big-time brands such as PepsiCo, Unilever and Mondelēz International. 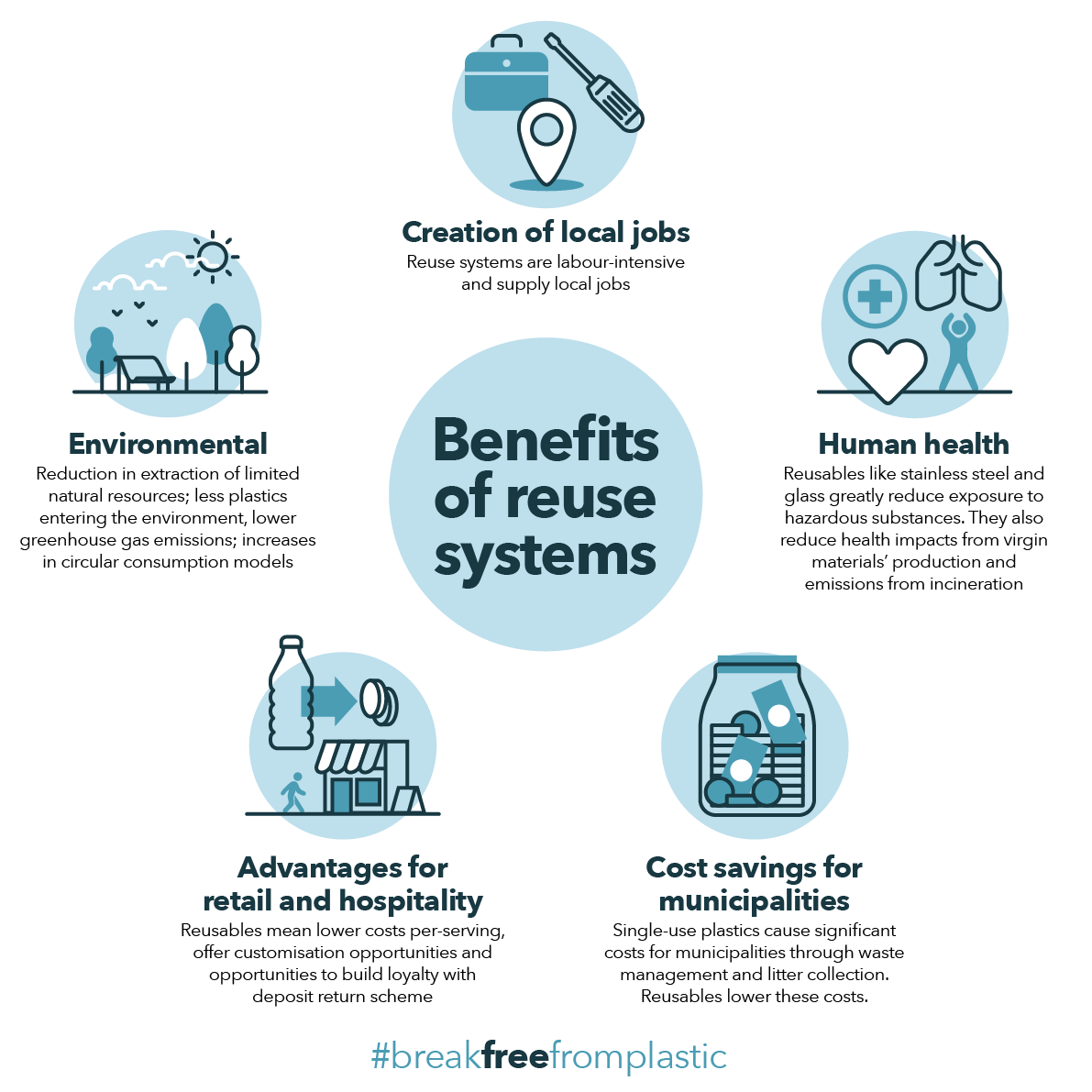 Reuse systems could lead to various benefits, according to the report.

Seventy-two percent of Brits would support a UK-wide DRS for plastic and glass drinks bottles and aluminum cans, according to a recent survey. This followed comments made by former Environment Secretary, Michael Gove, in support of an “all-in” DRS including drink containers of all materials and sizes, and Scotland’s commitment to introducing a DRS for glass, plastic, steel and aluminum drinks containers of all sizes in 2021.

Furthermore, a study earlier this month found that due to loss aversion, introducing a charge on disposable coffee cups would be more effective than the widely-used system of offering a discount to customers who bring their own reusable cup.

Commenting on this study, Bolger notes that her organization advocates for both a charge on single-use items and incentives such as reductions on reusable items. “Our goal is for reusable systems, run mainly by DRSs, to become mainstream,” she concludes.