You are in : All News > Switching out plastic: Most Europeans willing to pay more for reduced plastic packaging, DS Smith survey finds

11 Nov 2019 --- Six out of ten European consumers (62 percent) say they would be willing to pay more for food products that contain less plastic packaging in a recent survey by UK-headquartered DS Smith. A similar number (59 percent) indicate that they sort and recycle more than they did five years ago. The survey involves 3,395 respondents across the company’s key markets of Belgium, Germany, Poland and the UK, and seeks to provide insights into consumers’ attitudes and habits on packaging, recycling and waste management.

“Excessive packaging and plastic packaging are a real worry for Europe’s consumers – so much so that they’re now willing to pay for less plastic in their packaging. Europeans have really upped their game and are sorting and recycling more than just five years ago. It’s also very encouraging that they rightly understand that carton packaging is of much less concern: it’s a sustainable packaging alternative to plastic and hugely recyclable,” says Chris Murray, Managing Director of DS Smith Packaging UK. 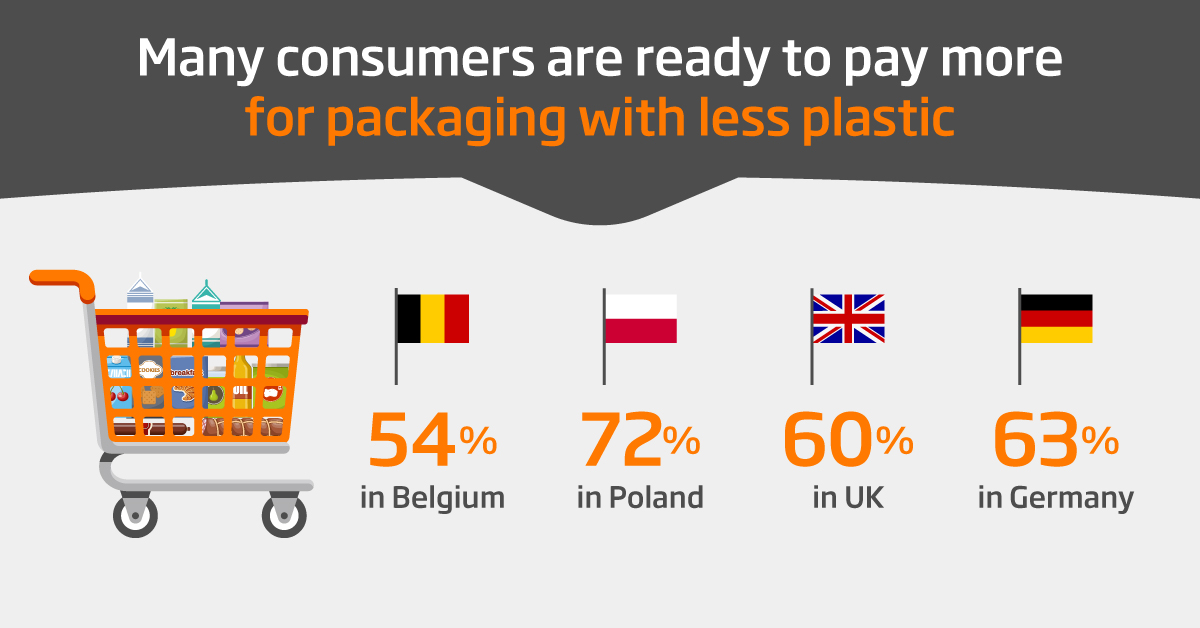 Click to EnlargeInfographic by DS Smith. When offered a choice between two packaging options for the same quality of product, a significant majority of consumers across Europe – nine in ten respondents (91.5 percent) – said they would choose the packaging with 85 percent less plastic. When asked if they would pay a 12.5 percent premium for this reduced-plastic packaging option, 62 percent of respondents say they are willing to do so.

Respondents in Belgium are most price sensitive, according to the analysis, where just over half (54 percent) say they would be willing to pay more for reduced packaging. Conversely, Poles are most willing (72 percent) to pay for the premium. The British and Germans are closer to the European average, with 60 and 63 percent respectively saying they would pay more.

An overwhelming majority of those surveyed – 86 percent – say that environmental issues are the major concern facing society today, with packaging a major worry for consumers across Europe. The Germans express most concern for packaging (83 percent), followed by the Brits (78 percent), Belgians (73 percent) and Poles (71 percent).

On the other end of the scale, the packaging option of least concern for Europeans is packaging cartons – cited by just 1 percent of respondents across the four countries. 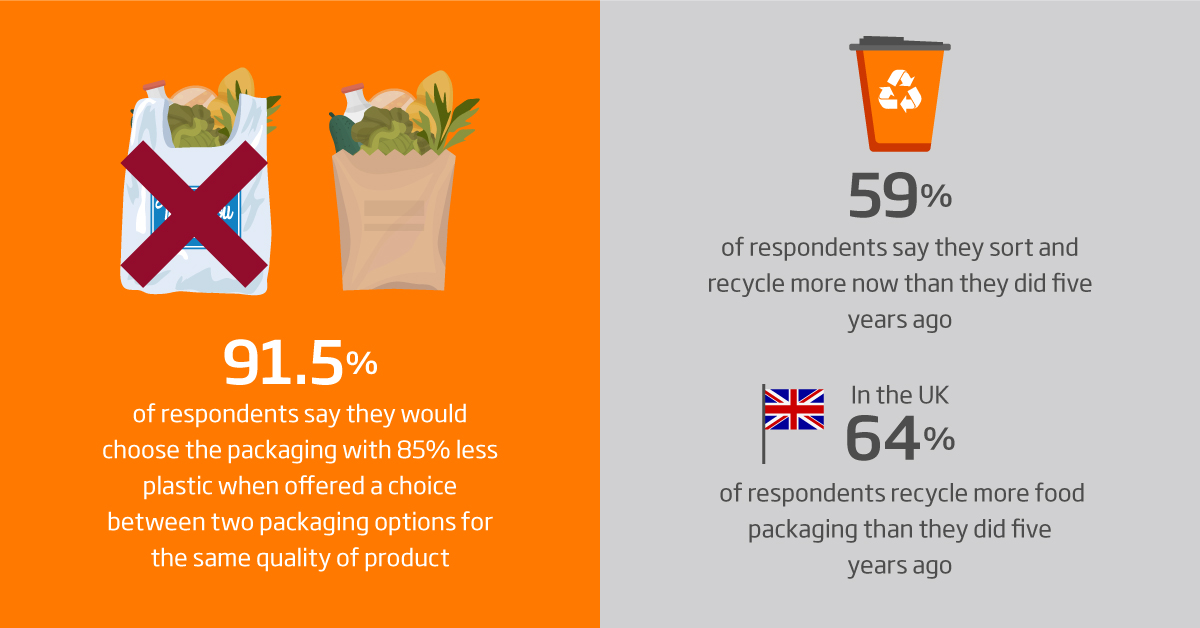 The good news is that the survey also reveals that Europeans’ recycling habits have improved significantly. An average of six in ten (59 percent) respondents across the four markets surveyed say they sort and recycle more now than they did five years ago. This represents a majority of respondents in all countries – with those in the UK leading the way (64 percent).

This phenomenon could be due to the fact that consumers in the UK say they both feel better informed about and pay more attention to recycling. The survey revealed media coverage and the removal of plastic bags in shops as the two main drivers for consumers’ awareness of the issues around packaging in Europe, which were cited by 30 percent and 24 percent of Britons respectively.

Fully two-thirds of Britons (66 percent) say that they both feel sufficiently informed of the recyclability of food packaging, and look at the presence of recycled materials in packaging when shopping for food.

“For the sake of our planet we need to create a truly circular economy where packaging is reduced to the minimum necessary, and consumer goods packaging is increasingly made from and with recyclable and recycled materials like cardboard and carton,” concludes Murray.

DS Smith sold its plastics division to private equity firm Olympus Partners in a reported US$585 million deal in March. The move allows the company to focus on its fiber-based model – as well as e-commerce packaging solutions – which spans corrugated packaging and paper.

On the show floor of Packaging Innovations 2019 in London, UK, DS Smith’s Frank McAtear, Business Development Manager for Premium Drinks, was asked by PackagingInsights to comment on the burgeoning trend of switching out plastic for paper-based solutions. 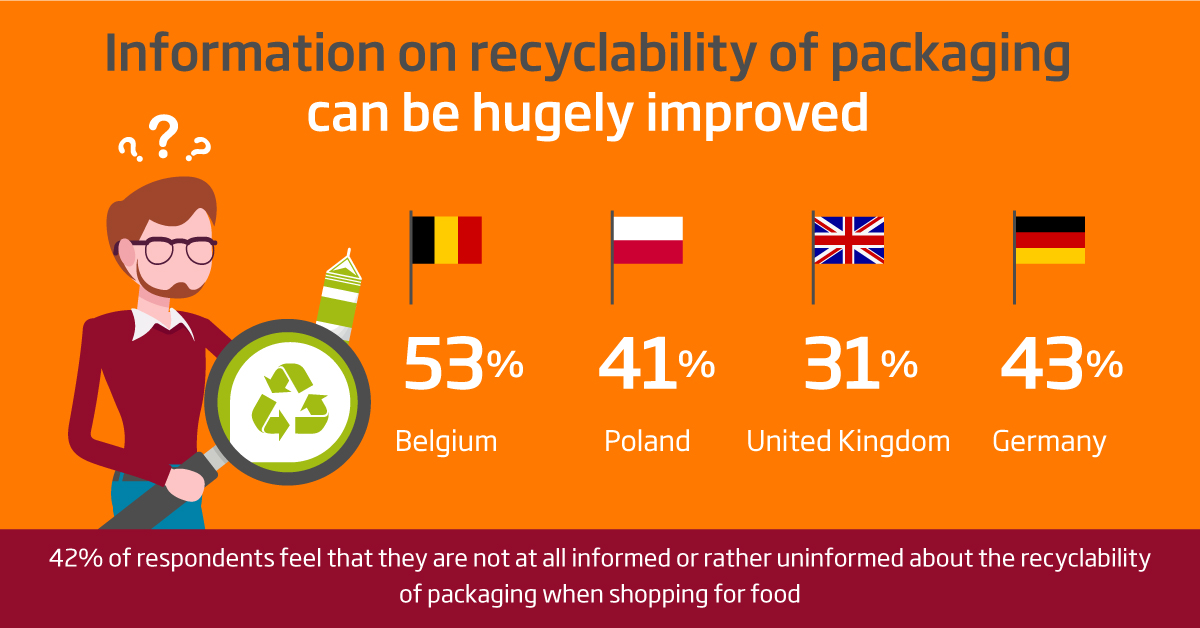 Click to EnlargeInfographic by DS Smith. “There’s been a massive surge in demand from brand owners and consumers alike to say that there is now very keen awareness of the damage that materials such as single-use plastic are having on the planet,” says McAtear.

“We’ve had frequent visitors from customers and inquiries from new contacts saying, ‘This is our current packaging and we're aware it doesn’t do the best job for the environment. Who can help us come up with a fiber-based solution?’ This is something that is really gaining momentum big time,” he adds.

Plastic in decline?
This year has seen significant moves by leading industry players to swap out or significantly reduce plastic packaging elements.

Last week, SIG, together with its joint venture partner SIG Combibloc Obeikan, launched a U-shaped paper straw for use on carton packages. The company explains that the launch supports its efforts to use more renewable sources with the paper originating from FSC-certified forests and other controlled sources. 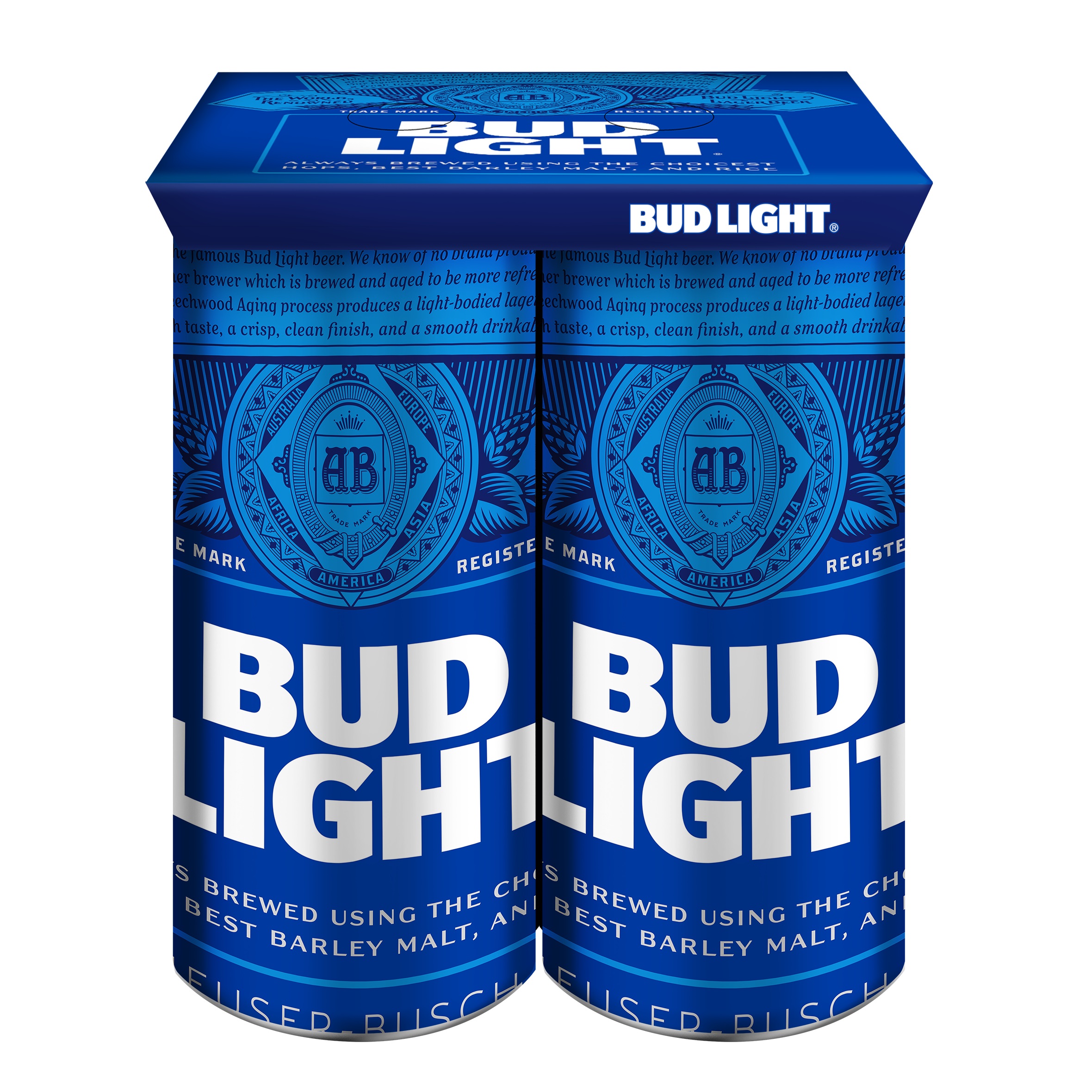 Click to EnlargeBud Light 4-pack Keel Clip, eliminating the need for plastic rings from can packaging.

Last month, a life cycle assessment (LCA) performed by the Research Institutes of Sweden (RISE) outlined that packaging trays made from BillerudKorsnäs’ FibreForm paper have up to 71 percent less global warming impact compared to trays made of only plastic. The main reason for the lower global warming potential is that the FibreForm laminate requires less energy in production than plastic. Also, the tray can be recycled as paper in most European countries, which reduces the end-of-life impact.

In September, Coca-Cola European Partners (CCEP) announced plans to remove plastic shrink-wrap across all multipack cans sold in the UK and transition to cardboard over the next months. More than 30 million packs sold to consumers each year will no longer be wrapped in plastic, the company says. It is the latest move in CCEP’s wider sustainability initiative, which will see 4,000 tons of plastic removed from circulation across Western Europe.

Meanwhile, Nestlé Japan replaced the plastic wrapping on its KitKat candy bars with paper as part of its commitment to use 100 percent recyclable or reusable packaging by 2025.

13 Aug 2020 --- With the assistance of chemicals company SABIC, Unilever will introduce its Magnum ice cream pints range in new tubs and lids made with fully recyclable and... Read More