You are in : All News > The future of plastic in an eco-friendly world

The future of plastic in an eco-friendly world 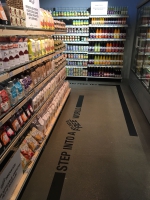 05 Mar 2018 --- The launch of the world’s first plastic-free food and beverage aisle on March 1, 2018,  at organic supermarket Ekoplaza in Amsterdam has made it easier to envisage a plastic-free world. In association with the international environmental campaigner group, A Plastic Planet, the aisle offers more than 700 plastic-free products across the meat, dairy, confectionery, and fruit and vegetable categories, with prices not expected to rise.

Plastic packaging has been replaced by scalable and convenient biodegradable packaging and even the secondary packaging which is used to supply the aisle is plastic-free. By using local suppliers, such as Do-It – a large importer of rice and wheat who offer 100 percent decomposable packaging such as cartons without plastic tape – Ekoplaza is demonstrating that a completely plastic-free packaging process is possible. Ekoplaza plans to roll-out plastic-free aisles across its 74 Netherlands stores by 2019, including at a new store in The Hague which is due to open later this year. Chief Executive, Erik Does, spoke exclusively to WorldPackagingOnline on the day of the launch: “I do believe we will be able to have a plastic-free society sooner than we think.”

The plastic-free aisle is regarded by many as the culmination of increased consumer demand for environmentally-friendly products. Describing the aisle as a "landmark moment”, co-founder of A Plastic Planet, Sian Sutherland, claimed that: “We can finally see a future where the public has a choice about whether to buy plastic or go plastic-free.’’ From a business perspective, Ekoplaza’s timing would appear logical, with Innova Market Insights identifying ‘The Mindful Consumer’ as one of the top predicted buying trends for 2018.

Plastic pollution is perceived as one of the main enemies to environmental sustainability. It is quite literally easy to see why – plastic is made from petroleum and endures for centuries in landfills, as pollution in waterways, or as litter on our streets. The unavoidable visibility of plastic pollution is no better evidenced than in the Great Pacific Garbage Patch, one of five major ocean gyres where huge concentrations of mainly plastic debris collect. According to the Earth Institute at Columbia University, there are already 165 million tons of plastic debris in our oceans.

A Plastic Planet is just one of a growing list of environmental campaigner, regulatory body, and company initiatives, targeting plastic pollution by minimizing – and sometimes altogether eradicating – its use as a packaging material. As part of its Energy Transition for Green Growth Act, France became the first country in 2016 to announce a ban on plastic plates, cups, and utensils, effective as of 2020, despite criticism from Pack2Go Europe, a Brussels-based organization which represents packaging manufacturers. Pack2Go has promised to legally challenge the move because they feel it infringes on European Law, particularly the legislation regarding the free movement of goods and the protection of manufacturers.

In a similar government move, January 2018 saw UK Prime Minister, Theresa May, announce her long-term strategy to eradicate all ‘avoidable’ plastic waste in the country by 2042. She referred to plastic waste as “one of the great environmental scourges of our time.” As part of the strategy, supermarkets will be encouraged to introduce plastic-free aisles, there will be government funding for plastics innovation, UK aid will commit to helping tackle plastic pollution in developing nations, and taxes and charges on single-use products such as takeaway containers will be considered.

In the retail arena, Iceland recently became the first major supermarket to commit to eliminating plastic packaging from its own brand products by the end of 2023. Plastic packaging is to be replaced by paper and pulp trays. The move comes after Iceland ran a survey of 5,000 members of the public, finding that 80 percent would encourage supermarkets to go plastic-free.

Despite wide-scale initiatives to reduce plastic consumption and waste, the volume of plastic used in packaging continues to increase globally. Innova Market Insights reports that 58.3 percent of all newly launched food and beverage products in 2017 were packaged in plastic, a 5.3 percent increase from 2013. This includes 96.5 percent of all newly launched flavoured and unflavoured water products packaged in PET bottles, only a 0.5 percent decrease from 2013. PET bottles are a particular concern for campaigners because they are highly consumed single-use items and pose health risks as nefarious chemicals leak from the plastic into the contained liquid.

There is, however, a counter-argument within the packaging industry that plastic receives more criticism than it warrants relative to other packaging materials and types of pollution. Susan Selke, Director of the School of Packaging at Michigan State University, spoke to WorldPackagingOnline about the realities of plastic pollution: “The light weight of plastics makes them more likely to be blown around by the wind and float rather than sink in bodies of water, making them more visible.”

“Public negativity towards plastic is also a reflection of the material being relatively new, which leads some to think of them as “unnatural” as opposed to things like glass, even though modern packaging glass is every bit as synthetic as plastic. Another issue is the association of plastics with items that have short-use lives. Also, a lot of the issues associated with plastic pollution involve improper management of many kinds of wastes, not just plastics.”

This latter point is also raised by Melinda de Boer, a spokesperson for Amcor, one of the world’s biggest producers of plastic packaging. Speaking to WorldPackagingOnline, Melinda de Boer said that, “most marine plastic originates from countries where consumer economies developed faster than their ability to manage waste. More than half comes from just five countries in Asia, according to research by the Ocean Conservancy and the McKinsey Center for Business and Environment.”

Garbage pollution is not the only environmental hazard associated with packaging; the eco-friendliness of the manufacturing process is also significant, and in this regard, plastics are environmentally competitive. They are relatively energy efficient and cheap to manufacture: only two pounds of plastic can support ten gallons of liquid. Melinda de Boer adds that: “Plastic packaging is light and typically excels in resource efficiency and environmental footprint compared with glass jars or metal cans. It has cut food waste, improved safety and human health, and reduced the total environmental footprint of products.”

Still, perhaps the biggest plus-point of plastic in relation to environmental sustainability is that it has recyclability potential. The same durability which makes plastics such a problem in terms of pollution also enables some plastics to be recycled – in theory – countless times without loss of quality, unlike other packaging materials such as paper and cardboard. Further to this, the petroleum that is needed to create plastics is not needed to recycle it. That is not to say there are not both technical and economical complications in the plastic recycling process, as Susan Selke highlights: “The properties of plastics derive from the long chain nature of their molecules. Use and reprocessing can result in chemical reactions involving changes in the molecular structure that may diminish the useful properties of the material.”

“Part of the reason plastics are so widely used is that they are relatively lightweight and low-cost materials. At the end-of-life, those same characteristics mean that you have to collect a lot of plastic to have a substantial mass of material, and those recycled materials will be competing with relatively low-cost virgin materials. That’s a challenge. And different plastics typically don’t “mix” well – to get good performance properties you need pure material streams.”

The challenge then becomes how to incentivize major suppliers and CPGs to overcome the technical and economic complications of plastic recycling in order to help create a functional ‘circular economy’. The ‘circular plastic economy’ is a model popularized by the Ellen McArthur Foundation which has since been incorporated into official EU environmental policy. Unlike the linear economic model, it prioritizes extracting the maximum value from products and materials by keeping them in use for as long as possible before recycling to create a new service life.

It is logical to assume that a circular economy will become more attractive to plastic suppliers and CPGs if the cost of virgin materials and oil continues to rise – but it could be some time before this is an immediate business concern. What is, however, becoming increasingly unavoidable is the growing consumer demand for plastic-free, or recyclable packaging, exemplified by the launch of the world’s first plastic-free aisle in Amsterdam. The packaging industry is diversifying to produce biodegradable alternatives to single-use plastic to meet the consumer demand. Take, for example, the innovations behind eco-friendly seaweed packaging, or the increasing number of specialist companies offering technological and often tailor-made plastic recycling equipment, such as Netherlands-based company Hermion.

Some large plastic suppliers have responded to the changing dynamics within the plastic packaging industry, and are working to inform customers that there is an eco-friendly and sustainable future for plastic. Earlier this year, Amcor pledged to become the first global packaging company to develop all its packaging to be recyclable or reusable by 2025. Melinda de Boer of Amcor spoke to WorldPackagingOnline about the landmark pledge:

Consumer demand for plastic packaging is changing, as are the dynamics of the industry. The major suppliers and packaging companies must work to effectively communicate the benefits that plastics can have in a more environmentally-stable world, and strive to deliver on their promises. After all, plastics are helping to drive innovation in flexible and resealable packaging; they are proven to preserve the benefits of food processing and extend product shelf-life; they even pose a potential solution to world hunger. If a circular plastic economy can be achieved, in which full-scale recycling is embraced, clean-up initiatives are sponsored, and packaging is lightweighted to avoid surplus production, there can be a place for plastics in a more environmentally sustainable world.

If you found this article valuable, you may wish to receive our newsletters.
Subscribe now to receive the latest news directly into your inbox.
X