You are in : All News > Europe hits record beverage can recycling rate spurred by deposit return systems 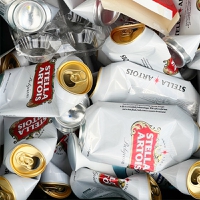 04 Jan 2022 --- A record 36.5 billion aluminum beverage cans were recycled in the EU, Switzerland, Norway and Iceland in 2019, according to European Aluminium and Metal Packaging Europe.

The trade associations pinpoint increased beverage can consumption as the main driver behind the record 76% recycling rate. Europe saved 488,000 tons of aluminum and 4 million tons of carbon dioxide in 2019, equivalent to the greenhouse gas emissions produced by a European town of 440,000 inhabitants like Bratislava, Slovakia.

Despite welcoming the new report’s results, beverage can manufacturers and their aluminum suppliers insist the recycling rates could go higher.

Moreover, glaring discrepancies between the best-performing nations, like Germany and Belgium with 99% and 98% beverage can recycling rates respectively, and underperforming countries like Cyprus with a 30% recycling rate, remain.

PackagingInsights recently explored the latest in beverage can innovation with international suppliers Crown and Canpack.

“Germany has a DRS with a €0.25 (US$0.28) deposit for consumers returning their cans. This [DRS] clarifies to a large extent the high recycling rate. The same is true for other countries with DRS in place, such as the Scandinavian countries, including Finland (97% recycling rate), and the Baltic countries,” Maarten Labberton, director packaging group at European Aluminium, tells PackagingInsights.

“Most cans are collected via the selective PMD Blue Bag system, and Belgium recovers a lot of aluminum packaging from incineration bottom ash, including cans, which were not put in the blue bag but ended up in the brown bag for the remaining household waste fraction,” explains Labberton. “These [brown bag cans] go to incineration. Aluminum doesn’t burn, and thicker packaging items such as cans hardly oxidize during and after incineration.”

Meanwhile, Cyprus has a poorly functioning selective collection scheme for recyclable packaging while a lot of household waste still ends up in landfills, he highlights. “In addition, there might be some unregistered informal can recycling based on cash for cans take-back initiatives.”

Can-to-can recycling
Although used cans are also recycled into a wide range of other valuable end-use products like bikes or electric vehicles, the most efficient solution is to use them to produce new cans, continues Labberton.

“No other type of beverage packaging can reach such high recycling rates while using so little primary material, resulting in product circularity and carbon emissions reductions.”

“It’s difficult to estimate how much of the end of life recycling result of 76% consists of ‘can to can’ recycling, but we think probably 1 out of 3 collected cans end up again in a new can.”

However, from an environmental point of view, it doesn’t matter whether a can becomes a can or ends up in a new bicycle, an automotive or a building part, he argues.

“Aluminum maintains its ‘permanent’ material characteristics regardless of the number of recycling trips. Also, the high scrap value guarantees that aluminum is recycled over and over again.”

European beverage can recycling is supported by the Every Can Counts initiative. Born in the UK in 2009, the initiative is regarded as the leading program for promoting drink can recycling and recently expanded into Brazil, a country with an aluminum can recycling rate of over 95%.Aluminum beverage cans are increasingly popular choices for wine.

Roadmap toward 100%
In March 2021, Metal Packaging Europe and European Aluminium launched their joint Roadmap toward 100% can recycling by 2030. This target can only be reached if existing packaging collection systems in Europe are further improved or replaced by well-designed DRS for beverage cans and other relevant beverage containers, they stress.

“With an increasing demand for fully circular packaging systems, the aluminum beverage can, which is made from an endlessly recyclable material, is the ideal alternative to less [environmentally] sustainable packaging options,” concludes Léonie Knox-Peebles, Metal Packaging Europe’s CEO.

“We now need to work together to make sure that even more used cans are correctly disposed of and recycled, so we reach our ambitious 2030 goal. We are confident the credentials highlighted in our Metal Recycles Forever logo will incite consumers to do just that.”

According to Innova Market Insights, just over half of European consumers believe metal packaging has good (31%) or excellent (20%) recyclability.

China concerns
In related news, Metal Packaging Europe warned in October that a critical shortage in the global magnesium supply is threatening to “catastrophically” derail the European packaging industry after the Chinese government began slowing production to reduce the country’s energy consumption.

Magnesium is an essential alloy for producing aluminum, steel and glass packaging.

Stora Enso and Tetra Pak are examining a shared beverage carton recycling solution to meet the growing demand in the Benelux for circular paper-based packaging. The... Read More

RecyClass has published the RecyClass Design Book, a practical guide clarifying the concepts of recyclability and design for recycling, based on a science-driven... Read More

Ardagh Metal Packaging is investing in the expansion of its production facility at La Ciotat, France. The new expenditure, supported by Bpifrance and Sud... Read More