You are in : All News > Iceland supermarket trials linerless labeling and cardboard packs for pears 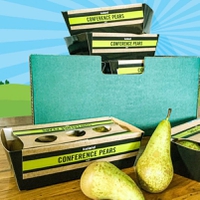 “Linerless in some areas of the world is still an emerging technology but one that is rapidly gaining momentum. There is a viable alternative to single-use plastic for packaging fruit and vegetables,” Ravenwood’s UK sales manager Jan Rees tells PackagingInsights.

The end result is plastic-free and completely recyclable. Previously, pears from Iceland were hand filled into plastic poly bags and plastic punnets.

Fruit Lid up to par with plastic
A “great deal of thought” went into the design of the tray and lid, says Rees.

“Transit trials were carried out and highly successful and by using a good quality board for the fruit lid (250 gsm), we are able to reduce damage and bruising, normally associated with plastic flow wrap.”

Moreover, the quality of the paper material is “food hygiene grade,” produced to a standard that allows for high resolution print and graphics, for clear instructions and visibility.

Machinery in the limelight
In addition to the label design, Ravenwood supplied Keelings with a Nobac 5000L linerless applicator, fitted with an extended outfeed for applying the labels. An ICE Viper TIJ, to print date and traceability information, has been integrated, including a Trojan Flash Labeller.

The Ravenwood Nobac 5000L can achieve pack speeds of up to 70 ppm and eliminates the need to turn packs. The linerless reels weigh up to 40 percent less and take up 40 percent less space than those with carrier backing paper.

“We are keen to explore various sizes and dimensions of trays to maximize the number of products we can extend this technology to. The new linerless label has a premium look and feel, bringing the pack presentation to a whole new level.”

On the road to plastic-free
This move is the latest step on Iceland’s journey to eliminate plastic packaging from its own-brand portfolio by 2023.

Rees sees some brands and retailers not using linerless because they have “yet to learn” about the benefits of using this type of labeling.

“The unit cost of the cardboard packaging for fruit is also slightly more expensive, which could deter some retailers when compared to a plastic equivalent. With cardboard, the environmental factors are obviously much improved, as cardboard is fully recyclable and biodegradable.”

The company’s “Plastic Free by 2023” pledge has saved 850 metric tons of plastic so far by replacing black plastic trays with cardboard across their street food ranges. It also aims to become carbon neutral by 2042.

The 100 percent recyclable Coral Tray mitigates food waste and includes a lid made of recycled corrugated board.

16 Oct 2020 --- Amcor is the latest in a series of F&B and packaging companies to join calls for a UN treaty on plastic waste. This follows a recent report by Boston Consulting... Read More

08 Oct 2020 --- The European Court of Auditors (ECA) is warning there is significant risk the EU will not meet its plastic packaging recycling targets for 2025 and 2030. The review... Read More