You are in : All News > Sachet economics: Unilever pinpoints affordability as NGOs see big problems with small packets

03 Feb 2022 --- Unilever is defending its use of hard-to-recycle plastic sachets in developing countries after coming under fire from NGOs, who accuse the company of exploiting impoverished regions with artificially cheap single-use packaging that causes devastating environmental pollution.

The FMCG giant argues single-use sachets are necessary because they protect products from humid climates and bright sunlight and offer poorer communities a chance to buy products in small quantities they otherwise could not afford.

However, Claire Arkin, global communications lead for the Global Alliance for Incinerator Alternatives (GAIA), tells PackagingInsights that the true cost of sachets is much higher.

“Plastic sachets are cheap to buy – but that’s because the full cost of these plastics is being left out of the tally. What about the cost to communities living near fossil fuel infrastructure and plastic production sites, who are exposed to toxic pollution on a regular basis, not to mention the climate cost?”

“What about the cost to consumers whose food and beverages contain hazardous chemicals leached from plastic packaging?”

The sachet devolution
Unilever sachets are typically made from different plastic layers: one layer prevents moisture and/or light from spoiling the contents, another seals the packaging, and another can display printed product information.

The only issue causing pollution and damage to human health, claims Unilever, is a lack of effective collection and recycling infrastructure.

GAIA dismisses this as nonsense and has produced a report demonstrating that before FMCGs like Unilever came to dominate the packaging market in these regions, “communities had traditional methods for buying small amounts of household goods, using reusable or compostable packaging.”

“Low-income communities in Indonesia and other countries in the region did not ask for sachets,” says Arkin. She points out that, prior to the entry of big businesses in the Philippines, Tingi culture – which dates back to colonial times – was a standard practice of poorer communities buying affordable piecemeal products with reusable packaging.

GAIA says companies like Unilever “physically and psychologically” co-opted this culture to drive single-use plastic packaging throughout the market.

Recycling not the solution
The statement released by Unilever defending its sachet culture in regions like Southeast Asia comes following an expose suggesting that one of its Indonesian recycling plants, which piloted a new advanced recycling method called CreaSolv, was quietly shut down despite a €10 million (US$11.3 million) investment – something the company denies.

GAIA says this case is a perfect example of how Unilever is mis-prioritizing its environmental sustainability strategies. 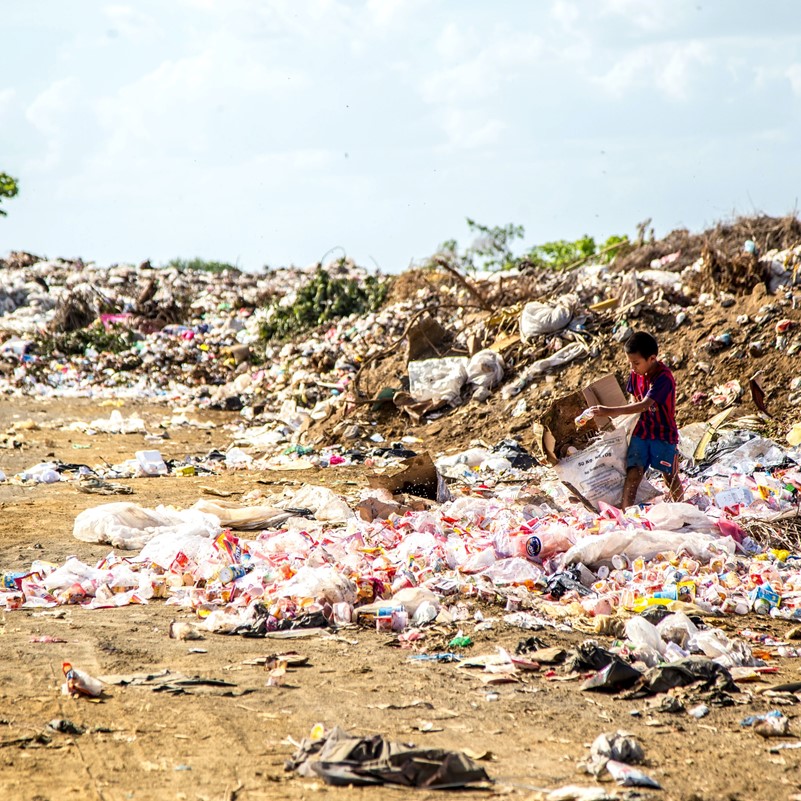 GAIA says Unilever should focus on plastic reduction rather than recycling.

“Unfortunately, with the exception of [Unilever’s] pilot-scale refill programs (which we are very much in favor of), all of the solutions that Unilever proposes exclude the highest and most important step in the waste hierarchy: reduction,” says Arkin.

GAIA maintains that the resources poured into the advanced recycling facility should have been used to expand its refill and reduction efforts.

“Imagine the number of sachets that could be permanently avoided had Unilever invested more in its pilot refill programs for low-income communities all over Indonesia? If Unilever could create a collection program for CreaSolv that covered multiple cities in Indonesia, why had it not done similarly on refill stations?”

Slow progress, room for hope
This tide of material misappropriation and misinformation GAIA alleges Unilever is guilty of can be seen in the company’s plastic reduction statistics.

Unilever aims to halve its virgin plastic use by 2025, but in 2020, the company only managed to reduce its plastic packaging usage by 1.4% compared with 2017 levels.

Last year, a Reuters report also found companies like Unilever are working with major cement corporations to use plastic as waste-to-energy for their kilns – something critics say can be a dangerous practice that justifies continued mass plastic production.

However, GAIA says Unilever and other companies like it can still reverse the tide on global pollution. “Unilever has the opportunity to be a hero in the fight against plastic pollution and climate change, but not by supporting end-of-pipe technologies like CreaSolv.”