You are in : All News > Waitrose to extend its bring-your-own-packaging concept following trial success 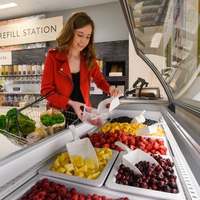 05 Aug 2019 --- Following an “overwhelmingly positive” response to its bring-your-own packaging trial, dubbed “Unpacked,” Waitrose & Partners is set to extend its packaging-free shopping experience in Oxford, UK, beyond the original end date of 18 August. The British grocer has also committed to introducing elements of the concept at three more establishments by the end of the year.

Through Unpacked, shoppers are encouraged to bring their own containers to transport dried goods such as pulses, frozen fruits and beverages, and pick up packaging-free fruit and vegetables, among other stripped back offerings. Although this “packaging-free” grocery projection is not new, as many smaller independent stores use such a model, it is a notable step towards improved sustainability for a large supermarket such as Waitrose to take.

In line with calls for increased sustainability in packaging, sustainability-oriented movements such as “zero waste” have been gaining supporters across the industry. Grocery shopping that encourages consumers to bring their own packaging presents an attractive initiative, as roughly 48 percent of packaging used by major UK supermarket chains cannot be easily recycled, according to recent investigations by UK charity Which?.

Waitrose first transformed its Botley Road, Oxford, shop in June, eradicating the packaging in more than 200 products to test how customers might be prepared to shop differently, with the aim of saving “thousands of tons” of unnecessary plastic.

The supermarket’s test, now into its ninth week, set out to get as much feedback as possible and more than 7,000 customers have provided comments through its in-store feedback walls, customer interviews, homepage and social media, using the hashtag #WaitroseUnpacked.Waitrose projects saving “thousands of tons” of unnecessary plastic.

While the original 11-week test has not finished, positive feedback from market research is spurring the supermarket chain to introduce Unpacked at three more shops, where it will be adding to already-planned refurbishments this year.

Unpacked will now form part of the new look stores to be unveiled in Cheltenham, Gloucestershire, in September and Abingdon and Wallingford, both in Oxfordshire, in November. The shops will again be branded with “Waitrose Unpacked” to maximize awareness.

All three shops will have a dedicated refillable zone. This will include dispensers for dried products, frozen “pick and mix,” coffee, wine and beer refills, as well as Ecover detergent and washing up liquid refillables. Waitrose aims to extend the refillable range of products available at the three shops following customer feedback, but has not finalized plans at this stage.

The brand notes there will still be a wide range of Unpacked fruit and vegetables, which will need to change according to the seasons.

The Oxford test is already helping the supermarket to understand what works for its customers. The Veg Kitchen was not as popular as some of the other concepts, and shoppers preferred to bring their own containers rather than borrow-a-box. Both concepts will therefore be removed from Botley Road by the end of August and will not feature in the three additional shops.

“We are keen to take the Unpacked concept forward and these additional tests will help us achieve this as well as understand its commercial viability,” says Tor Harris, Head of CSR for Waitrose & Partners. “Through working with our customers and suppliers we will continue to learn and develop ideas which have the potential to be rolled out more widely.”

Major brands phase out single-use packaging
Many leading brands have encouraged the use of reusable packaging, contributing to a gradual phase out of industry-generated waste. Earlier this year, British retailer and supermarket Marks & Spencer (M&S) removed plastic packaging and “best before” stickers from over 90 lines of fruit and vegetables in a UK trial.By the end of the year, three Waitrose locations will have a dedicated refillable zone.

Last May, retailer Morrisons announced plans to introduce plastic-free fruit and vegetable zones across many of its UK stores. Customers will be able to choose from up to 127 varieties of fresh produce and buy them loose or put them in recyclable paper bags.

Hot on the reusability trail, Unilever launched Cif ecorefill in July – a new at-home technology that allows consumers to refill and reuse their Cif spray bottles “for life.” Made with 75 percent less plastic, Cif ecorefill simply attaches to the current Cif Power & Shine bottles and seamlessly releases the super-concentrated product into the bottle, which is filled with water at home.

In similar news, Olay is remodeling its Olay Regenerist Whip moisturizer with a refill pod made from recyclable polypropylene that fits within its jar. Brand-owner Procter & Gamble (P&G) says the beauty brand project will save over 1,000,000 lbs of plastic, per five million jars sold. The packaging concept is set to debut in October 2019 and will run until the end of the year.

Israeli tech startup UBQ Materials is claiming to have developed a process that can produce the most “climate-friendly thermoplastic on the market.” By... Read More

Swedish researchers recently discovered that plastic-degrading enzymes are increasing in correlation with plastic pollution in the world’s natural... Read More

Eastman is investing up to US$1 billion in building what it says is the world’s largest molecular plastics recycling facility in France. The announcement was made... Read More